Karen Asper Jordan (left) and Bernyce Mills-DeVaughn, who were both members of the “Young Militants,” an advovacy group that marched for seven months and 17 days to protest the segregation of … 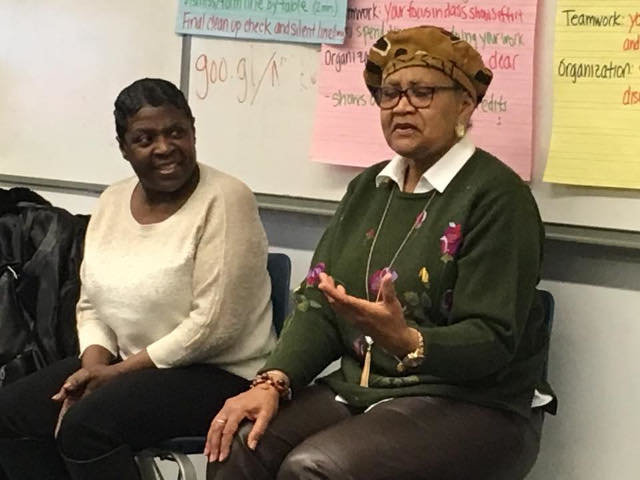 Karen Asper Jordan (left) and Bernyce Mills-DeVaughn, who were both members of the “Young Militants,” an advovacy group that marched for seven months and 17 days to protest the segregation of Girard College, a free boarding school for poor white orphan boys, talk to eighth graders at Wissahickon Charter School about their experiences as “Freedom Fighters.” (Photo by Ken Weinstein)[/caption]

We're gonna keep on a walkin'

Keep on a talkin'

Bringing up the Freedom Line”

Freedom fighters Karen Asper Jordan, 67, and Bernyce Mills-DeVaughn, 68, clapped their hands and sang when one of the eighth graders at Wissahickon Charter School, 815 Washington Lane in East Mt. Airy, asked them to sing one of their freedom songs.

It was just one of the many songs they sang while marching to protest the segregation of Girard College. Stephen Girard was a wealthy merchant and banker who, after he died in 1831, left millions to the city to build a free boarding school for poor white orphan boys, aged 6 to 18.

Both Jordan and Mills-DeVaughn were members of the “Young Militants, an advocacy group also known as “Cecil's Army” that marched around-the-clock for seven months and 17 days along the school's 10-foot-high stone wall that surrounded its 43-acre campus.

Jordan, who lives in Logan, said both she and Mills-DeVaughn looked up to Cecil B. Moore, a criminal lawyer and head of the local chapter of the National Association for the Advancement of Color People (NAACP) who helped lead the movement to integrate the school.

“He was our protector,” said Jordan, who is a retired nurse. “He was our hero. People called him the first community legal services because he never turned anybody down. When we got arrested for protesting, he made sure we were treated fairly.”

She said Moore was a man of his word.

“His word was his bond,” she said. “If he said he was going to do something, he did it. He once said 'I am going to use every weapon in the arsenal of democracy for justice,' and he did.”

Jordan was just 15 years old when the march began on May 1, 1965. She said being a freedom fighter was one of the best and most rewarding experiences of her life because they were fighting for what was right.

“We were helping others against all odds, and we believed we were going to make a difference,” she said. “Not everybody was for us – even in our neighborhood. People didn't think we should be challenging this man's will. A lot of people didn't think we would be successful be we were.”

Students asked if they were scared for their family and friends.

Jordan said her family was threatened because she was picketing.

“The fear I had for my friends was police brutality,” she said. “I think I was able to fight against the adversity because I had a strong sense of self.”

De Vaughn, a Cedarbrook resident, grew up in Virginia and later moved to Philadelphia. She said that, as a teenager, her family wasn't in any danger, but she worried how her family would react to her being out there.

“We had seen how the protesters were being treated in Alabama and Mississippi and other places in the South,” she said. “That was the biggest fear – how we were gonna be treated by the police.”

One of the students asked what was the worst encounter she had with the police. She recalled how her friend Eugene “Freedom Tree” Dawkins was brutally beaten by police.

She explained that his nickname was “Tree” because at 6-feet, 5-inches tall, he towered over his friends like a tree.

“Kenneth 'Freedom' Smitty and I heard a commotion behind the building,” she said. “I looked down and saw Freedom Tree. They were beating him so badly he was crawling on the cement trying to get under a truck. I have never seen anybody beaten so severely. That was what has stayed with me.”

She pounded on the wall with her fist to demonstrate how loud and hard the sound of the nightstick sounded against his head and body.

“Kenneth went to get help,” Jordan said. “I just jumped down and tried to get the cops off of him. And the cop pushed me, and I tried to go back, and he pushed me harder. Then, the Civil Disobedience Squad or the uniformed officers came and held me against the wall.

“They were really trying to protect me,” she said. “I was crying hysterically and screaming 'They are gonna kill him Sandy'. The Civil Disobedience officers were distraught, too, because we weren't doing anything to deserve to be beaten like that. Then, they pulled Tree out from under the truck and threw him into the paddy wagon like he was a piece of meat. That was the worst I've ever seen in my life.”

Mills-DeVaughn said she didn't get beaten up.

“I only got pushed,” she said.

She quickly added that both of her sisters were hurt at a demonstration.

“Deputy Commissioner Frank Rizzo came out, and he told the police to break up the protestors,” she said.

Mills-DeVaughn said there was a mad rush like the scene in the movie “Selma” where the police rushed the demonstrators.

“The police were running over them with the horses, and they were throwing gas canisters,” she said. “People started rushing back away from the police. That scene happened on Girard Avenue. There were policemen on horses and officers with dogs.

“The protestors started running towards 20th Street, and my younger sister, who was about 13 years old at the time, tripped on the brick sidewalk and fell. German shepherds jumped on my sister and started pulling on her to drag her. My older sister saw her and started beating on the dogs. Then, the police started hitting my older sister Debbie. She ended up going to Philadelphia General Hospital.

“After they treated Debbie's injuries, she was transported to the Youth Study Center, which is now located where the Barnes Foundation is on the Parkway. The Youth Study Center is where they would take juveniles. The police charged her with resisting arrest, assault on police officers, disorderly conduct, and breach of peace.

“Cecil B. Moore came and got her out. I remember she had to stay home from school for a number of days because she had dog bites."

Another eighth grader asked Mills-De Vaughn if she thought about not protesting after that.

She said she replied “no” because she grew up in the South.

“As a child, I grew up in segregation,” she said. “If you ordered something at a restaurant, you would have to knock on the door and wait outside the door until they brought you your food. The lunch counter always had a sign that said 'colored,' and you had to wait until someone took your order.

She said they knew what was happening to protestors down South.

“We were young but that didn't stop us,” she said. “We never missed school and participated in activities after school, but then we dedicated ourselves to the picket line.”

Devon Rob, an eighth grader at Wissahickon Charter School, said he was surprised that they weren't scared to protest.

“One thing that shocked me was despite getting arrested and her sister [Mills-DeVaughn's sister] getting bitten by dogs, they still went back out there to fight for what was right,” he said.

Rob said their words really resonated with him.

“Fight for what is right and don't let your fears get ahead of you,” said Rob.

Both Mills-DeVaughn and Jordan were recently in “Cecil's People,” an Emmy-award winning documentary about the Girard College freedom fighters that was created by Sam Katz's History Making Productions. To watch the two short films go to historyofphilly.portalbounce.com/en/user-media.html?v=3155.