Hannah Wolff is one of the stars in Quintessence Theatre’s Synge Festival, having performed previously in Quintessence’s productions of “Frankenstein” and “Wilde Tales” and in many … 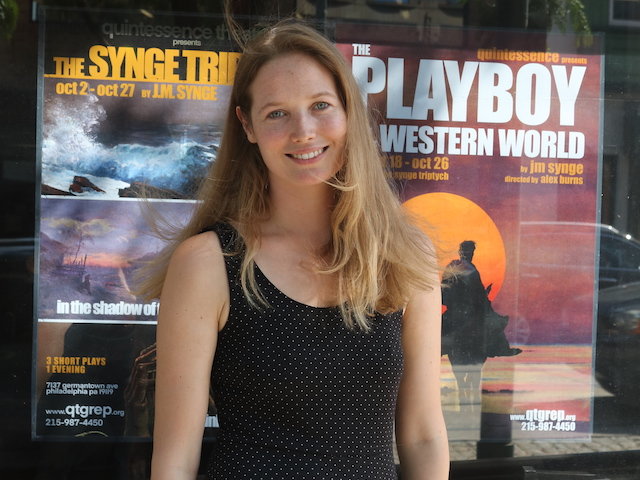 Hannah Wolff is one of the stars in Quintessence Theatre’s Synge Festival, having performed previously in Quintessence’s productions of “Frankenstein” and “Wilde Tales” and in many readings there. (Photo by Frank Burd)[/caption]

Hannah Wolff comes from a little town outside Des Moines, Iowa. She grew up with separated parents and a stepmother who supported and encouraged her. She found acting, and before she left Des Moines, where she went to high school, she portrayed Emily Webb in Thornton Wilder’s “Our Town.” She was accepted into Rutgers University’s highly regarded acting program and came east for the first time.

“Before I left Iowa, I was in an occasional play in school and sang in many choral groups. Rutgers didn’t do musicals,” she said last week. “I love singing and acting, but musical theater has not been part of my resume.”

Her Rutgers program was almost a BFA/MFA program, though she received just the Bachelor’s after four years.

“It was intensive,” she said, “and I had the opportunity in my third year to join two dozen other actors for a special program, ‘Rutgers at Shakespeare’s Globe,’ in London. We learned so much about movement, speech and the historical context of the many plays. And every week, we went to another performance.”

Her resume includes plays by Shakespeare, Greek tragedy and other classic plays.

“At 27, I’ve had more luck getting cast in older, more traditional plays.”

Clearly, they all want her as the pretty young ingenue (which she will play) rather than some of the more meaty parts she hopes will be in her future.

She spent the summers after her second and third years of school in New York City and got involved with the Off-Off Broadway scene with The Actors’ Theater, among others. She earned her keep waiting tables. Then she made the decision to come to Philadelphia three-and-a-half years ago.

“I wanted to be in a city with a vibrant theater community, yet also had easy access to New York,” she said. “I didn’t know anyone in Philly. What I found is not only a great theater town but a beautiful city, which I am still exploring. The only problem I sometimes face is the lack of a good transportation system when you don’t have a car.”

She began the tedious task of auditioning. She understudied the role of Hannah in Theatre Exile’s production of “Ideation.” She performed in cabarets with REV Theatre Company, which often stages their shows in outdoor venues. “Death is a Cabaret, Ol’ Chum” takes place in a cemetery. “It’s very exciting to perform outdoors. It brings a whole new dimension to theater,” she said.

Wolff staged the first production of her own new theater company, Idestia, which she co-founded with Adaeze Nwoko and Vanessa Sterling. Wolff was the director. The play, Shakespeare’s “Richard III,” was staged in the Christ Church burial grounds. “We’re looking for something more contemporary for our next show.”

Also a writer, Wolff penned a 10-minute play that was in a recent festival. She wrote a fulllength play about two struggling step-sisters. “I am always looking to work on plays with strong female stories, whether writing, acting or directing.”

Currently, Wolff is performing in Quintessence Theatre’s Synge Festival. It’s not the first time she has been on stage in the professional Mt. Airy theater. She was in Quintessence’s productions of “Frankenstein” and “Wilde Tales” and in many readings there.

Quintessence is celebrating the great Irish playwright, J.M. Synge, with performances and recitations from his works. The main two features, in repertory, are his “Playboy of the Western World” alternating with a night of three shorter plays under the title, “The Synge Triptych.” Wolff loves having the opportunity to be in one play one night and another play the night after.

An extraordinary, intelligent woman, Wolff is connected to both the culture of our times and to history. I asked whom she would like to portray if given the opportunity to play anyone on stage in a one-woman show. After much thought, she responded.

“Hildegard von Bingen. She was a German Benedictine abbess, writer and mystic, almost a visionary.” When I asked for someone more contemporary, she said, “Grace Kelly.” She’s in the right city for that.