Wistar family members look at medical books from Caspar Wistar's collection. by Brendan Sample When Caspar Wistar first emigrated from his home country of Germany to settle in Philadelphia in 1717, … 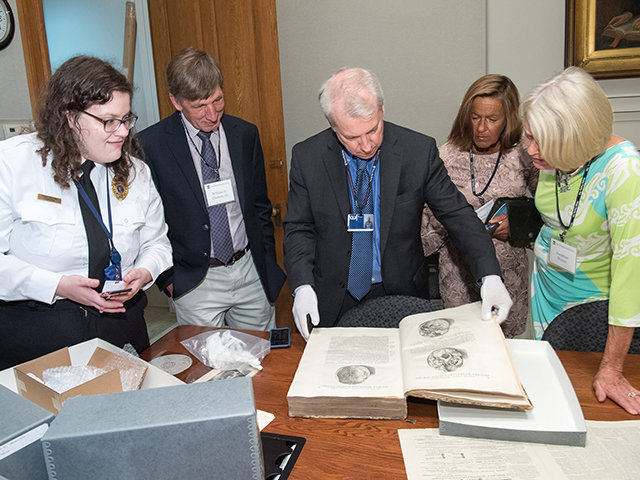 When Caspar Wistar first emigrated from his home country of Germany to settle in Philadelphia in 1717, it is doubtful that he could have imagined the family legacy that he would start. A landowner and glassmaker during his life in America, Wistar arrived with only pennies to his name, but would become the foundation of a family that continues to honor his legacy to this day.

With this year being the 300th anniversary of Wistar coming to Pennsylvania, the family held a major reunion last month as a way for members to meet many of their relatives, both extended and direct, for the first time. For a family spread across the world, but with deep roots in Philadelphia, it gave the Wistars a unique opportunity to come together and honor a legacy that has been centuries in the making.

“I don’t remember having a family reunion at all,” said James Wistar, who initially came up with the idea for a reunion several years ago. “As a result, I don’t know a lot of my extended family members. ...There’s usually no reason to come back here, and so they don’t. My goal was to create a reason for them to come home.”

James Wistar is also the president of the Wistar Rose Association, which has carried on one of Caspar Wistar’s traditions for nearly 300 years. Several decades into his life in America, Caspar had grown to become the second-biggest landowner in Pennsylvania, right behind William Penn, and one of his transactions was purchasing land for the Tulpehocken United Church of Christ in Richland. Instead of asking for money, Caspar wanted the payment to be a single rose given to his family every year. Though there have been some breaks from year to year, the association has kept the tradition going as a way to keep members of the Wistar family united.

“If not for the rose celebration, I wouldn't have met any of the Wistars and been in touch with any of my extended family,” said Albert Michell, a member of the Wistar family. “It gives us a purpose and a reason to stay in touch.”

“It’s great to get everyone together because in the past it was a very tight circle with nobody leaving Philly or the suburbs,” said Caroline “Bobby” Wistar, a Chestnut Hill resident and Rose Association committee member. “There are still a number of relatives around here, but they can only contact so many. These days it seems like many people don’t have time to work on family matters.”

Beyond choosing who receives the rose, the association also raises money each year to support the church in various ways. Some of the specific fixes have included replacing the air conditioning, adding stained glass windows and buying a new pipe organ.

Perhaps the most prominent way in which the Wistar family is known to Philadelphia today is through the Wistar Institute, a nonprofit medical research facility founded by and named after Caspar’s grandson, known as Caspar Wistar the Younger. The Institution has become a worldwide leader in medical science research, though any connections to the tradition of the Rose Association are in name only.

In addition to being rooted in Philadelphia as a whole, the Wistars have a specific connection to Germantown in the Wyck Historic House and Garden. Caspar Wistar moved into the Wyck House with his wife, Catherine Jansen, after they married in 1726 to raise their family. Part of the decision to live in Germantown came from Caspar’s German background, as he spent plenty of time during his residence there helping to settle and socialize with other local German settlers.

Another little-known connection the Wistars have to the surrounding area is to the Wister family. Though the two families grew apart after coming to America, they were initially the same family and were originally known as the Wüsters in Germany, Caspar’s name was changed to “Wistar” by an immigration officer when he first arrived, while his brother, Johannes, was given the name “John Wister” by a different officer when he immigrated approximately 10 years after his brother. Though the two families have long been considered separate, it certainly explains the fact that their surnames are nearly identical.

With a rich history tied into Philadelphia’s roots and an extensive, far-reaching family tree, the Wistars will likely have plenty of traditions to celebrate and legacies to honor for the foreseeable future. While it will be difficult for members of such a large family to all meet each other, events like the recent reunion and the annual rose ceremony ensure that the Wistars never completely lose touch after three centuries.

“Going out there every year is always a lot of fun,” said James Wistar. “It’s always very social, and you always meet people out there that you didn’t think that you would ever meet or know who end up being very interesting people.”