What to do when a wild animal shows up in N.W. Philly

These beautiful raccoon siblings were unable to get out of a dumpster, which they had entered in search of food. Experienced animal handlers were able to extricate them and return them to the wild. …

What to do when a wild animal shows up in N.W. Philly 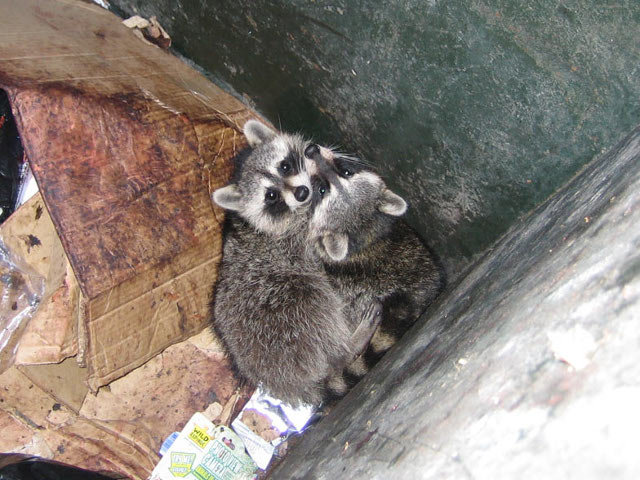 These beautiful raccoon siblings were unable to get out of a dumpster, which they had entered in search of food. Experienced animal handlers were able to extricate them and return them to the wild. (Photo by David Seerveld of aaanimalcontrol.com)

Recently, a friend was walking past a dumpster near a school in Chestnut Hill when she heard sounds coming from inside. She was startled to find a large raccoon screaming in fear, having realized that it had been discovered by a “human predator” and was trapped inside the bottom of the near-empty metal cube. The raccoon was lured into the dumpster by the smell of food strewn on the bottom, but the flimsy plastic covers were completely open which gave it easy access. My friend phoned to alert me of the situation, and I was able to explain to her the best way to help this animal escape safely. She listened and agreed that what I conveyed was sage information, but she was not comfortable executing the escape.

On my street, I am the “go-to person” when neighbors find skunks in their window wells, opossums in their garbage cans, birds or squirrels in their fireplaces, bats in their houses and even snakes in their garden furniture. The solutions are quite simple, intuitive and inexpensive. The costly part is creating the self-confidence needed to approach a distressed, sometimes vocal or flailing wild animal.

What I have learned from working with wildlife for 25 years is that most animals are predictable if you understand their behaviors. I once came upon a group of birders in Cape May who were afraid to walk past a Canada goose that was hissing and throwing out its wings, thereby successfully preventing them from proceeding along the path past the nearby goslings. I walked close to the goose with confidence, and it retreated into the water without attempting to bite or “wing” me. Most animals will back down, but you don’t want to get near any wild animals, especially one that is cornered or injured. Thus, it is always wise to wear leather gloves and long sleeves so that you do not get scratched or bitten.

If you do happen to find a skunk, raccoon or opossum in your garbage can, gently turn it onto its side. (Avoid the “kick it and run” approach which will scare the animal into staying in place.) The animal will likely run out once it realizes that it has an opportunity, but it may not leave until it senses that you have also left.

If you find an animal in your window well or in a dumpster, as in my friend’s case, you will need to provide the trapped critter a way to exit. This can be in the form of a rough board, a ladder or even a knotted sheet securely anchored. Remember that a raccoon will put a lot of weight on an object and will likely crush cardboard boxes or flimsy objects. The dumpster with the raccoon was very high, so we set a large rough-surfaced board inside the dumpster.

The plan was to angle and brace it by putting one end against the bottom and having it lean against the other side. However, the raccoon was very agitated and lunged at the board, despite my friend’s attempt to distract him. As the bottom of the board touched the floor on one side, the raccoon began climbing up it, so I withdrew my hands (quickly). I expected the board to fall sideways, but the coon was so fast that he reached the top of the board and was out of the dumpster within 15 seconds. Had the board been too smooth or heavily varnished, the raccoon would not have been able to climb out. I had also brought along some crates in case I needed to build an escape tower, but the board provided a perfect exit. My array of sheets also proved unnecessary.

I don’t have enough space to go into all the types of removals that could work for different situations, but I can’t stress enough the importance of capping your chimney and sealing up any holes around your house (top and bottom) that might invite animals inside. Domestic animals, especially cats, are also often trapped inside dumpsters. And please encourage any business with dumpsters to keep them securely covered for the safety of both humans and animals.

Brenda Malinics, a Roxborough resident, is the founder of Brenda’s Cat Rescue (brendascatrescue.org), which operated out of a storefront for a few months last year at 8514 Germantown Ave. They have rescued and found homes for countless stray cats over several years.

* This article is reprinted, with permission, from The Shuttle.