What do you do when you're attacked by your son's pet?

The red-ear slider turtle is adorable and pretty until he gets his teeth around your finger and will not let go. by Jim Harris Some of you may have heard about the reality TV show, “When Animals …

What do you do when you're attacked by your son's pet? 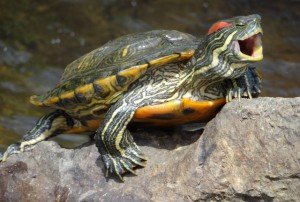 The red-ear slider turtle is adorable and pretty until he gets his teeth around your finger and will not let go.

Some of you may have heard about the reality TV show, “When Animals Attack.” Personally, I’ve heard more about it than I ever wanted to hear. The show usually gives an account of some poor shlub who is attacked by either a wild animal protecting its turf or a captive animal unhappy about its situation.

Now, in our household, my wife and I have so far prevented our teenage son from obtaining an “X-Box” or whatever the latest hi-tech time-wasting device is that kids use to play violent and gory video games. We can’t, however, stop him from watching television, and from time to time, usually at the dinner table, he seems to delight in regaling us with stories that he has seen on “When Animals Attack.” The stories usually involve limbs being bitten off and other delightful twists and turns.

As ill as these tales make me feel, I hesitate to stop him because he is, after all, actually talking to us without (a.) complaining, (b.) asking for something or (c.) both. After a while, though, when I can’t take anymore, I excuse myself to “use the bathroom,” where I lock myself in and work on the Sunday New York Times crossword puzzle until he forgets about me and embarks on some other teenage pursuit.

So anyway, the day before Christmas I was home alone, feeding my son’s turtle, Shelly. She’s a red-eared slider, about eight inches long. The boy usually just drops her food into the tank, but I like to feed her the food pellets while dragging them through the water, so as to add a little exercise and adventure to her mundane life. She occasionally bites my finger by mistake but always lets go when she realizes it’s not food. This day, however, she did not let go.

The more I tried to pull away, the harder she clamped down. I was dragging her around the tank trying to extricate myself. At one point I pulled her completely out of the water, still hanging onto my finger. By now her grip was tighter than ever and starting to hurt. I lowered her back into the water and offered her food with my other hand, but she was beginning to panic and paid it no heed. I, too, was beginning to panic and decided to use my superior size and alleged intelligence to my advantage.

I gave her a good solid rap on the shell, which I was sure would intimidate her into releasing me. Instead, she executed a maneuver that completely flummoxed me. She retracted all her appendages, including her head, inside her shell. So there I was, all alone, in pain, with my finger stuck somewhere inside a frightened turtle.

I began to think of the stories my son had told me about such incidents. This was usually the part where the victim either loses a limb or shoots the offending animal. Being a guitar player, I wasn’t prepared to forfeit my index finger, but neither was I willing to shoot Shelly. I mean, it was Christmas Eve. How could I tell my son that I had shot his turtle? It would have cast a pall over the holiday.

I suppose I could have said that home invaders broke in and shot her. Maybe I could have somehow blamed it on North Korea, but the point was moot anyway since I don’t own a gun. (Oops, now all the criminals know I’m not armed.) It would have also been hard to call 911 using only one hand, and driving a car would have similarly been difficult, not to mention dangerous.

In the end, I decided to go into her shell with my free hand and try to pry her little mouth open. It was scary, but it was the only option I could think of. I took a deep breath and proceeded. It wasn’t exactly a near-death experience, so I can’t say that my whole life flashed in front of me, but I did mentally review a few key occurrences: grade school graduation, my wedding day and the entire 1980 World Series. Thankfully, the extrication turned out to be an easy operation, and within a few seconds I was a free man again.

My story will probably never appear on “When Animals Attack,” but I think it’s a good story nonetheless, and I wanted to share it with you just in case you should ever find yourself in a similar situation. Oh, and yes, I still feed Shelly by hand but very, very carefully.