Water Tower Rec Center gets a cleanup by Comcast

Comcast employee Joseph Ryan participated in a day-long service project sponsored by the company at the Water Tower Recreation Center. (Photo courtesy of Comcast) by Samuel Newhouse The century-old …

Water Tower Rec Center gets a cleanup by Comcast 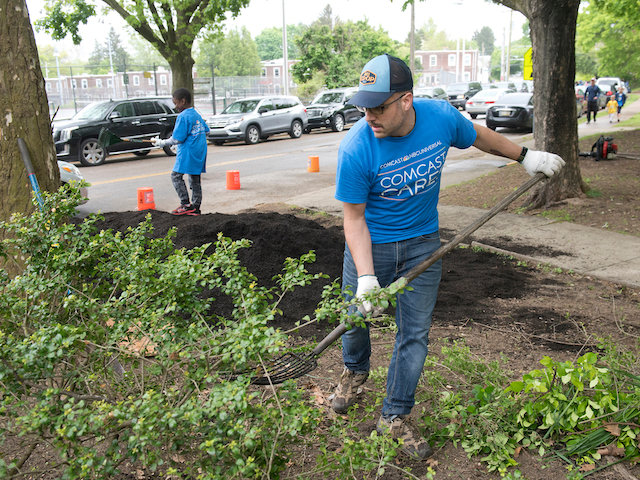 The century-old Water Tower Recreation Center in Chestnut Hill is looking a lot brighter this week after the second annual cleanup by volunteers with the Comcast Cares initiative.

The central structure of this popular recreation center at 209 E. Hartwell Ln. was built about a century ago on the site of the former pump station for the nearby century-and-a-half- old water tower visible from Ardleigh Street.

After Keith Kunz, president of the Water Tower Advisory Council, started talking about organizing a community cleanup day of the popular but somewhat neglected recreation center, his wife, Krystin Kunz, a project manager at Comcast, mentioned it might be a good project for the company's Comcast Cares volunteering event.

Dozens of volunteers, including Comcast employees and their family members, descended on the recreation center on May 4 to help pick up and sweep up around the grounds and to clear out long-unused basement spaces. Comcast Cares first cleaned up around the Water Tower one year ago, clearing debris and ivy from around the building.

“It's good to see the work lasted,” Krystin said. “There's definitely a lot of potential here and it's just a matter of getting it cleaned out so that we can utilize the rooms and the space that's actually here.”

This year's cleanup involved a lot of work in continuing to clear out long-unused basement rooms that the center's Parks and Recreation staff hasn't had the manpower to address.

“We had done a tour of the building, and some of these rooms, nobody had been in here forever,” Keith said.

The whole basement was basically unused and full of various detritus when Kunz and the Advisory Council recently started ramping up cleaning efforts. Kunz said he found one basement room full of fitness equipment that no one knew existed – some of the equipment was never even used and still wrapped in plastic. Now it's being used by neighbors and for a fitness class.

In addition to volunteers, Kunz has had teams from J-Dog Junk Removal on-site, and roofers from Kurtz Construction also did work to help beautify the center.

“We're trying to do the basic and the infrastructure first, because for years it was just 'let's patch the same wall every year when it starts to leak,'” Kunz said. “I want to fix the problems so we only fix the wall one time.”

The WTAC has more plans for the center. It's currently seeking funding to get the heating system upgraded. But despite any issues that needed cleaning up, the center is beloved by locals and in active use, with gymnastics, basketball and other classes in full swing during the clean-up, plus baseball games held by Chestnut Hill Youth Sports on the fields out back.

Pennsylvania State Representative Chris Rabb came by during the clean-up and praised the volunteers' handiwork in opening up new rooms for use by the center.

“I have a lot of fond memories here,” Rabb said. “There are some rooms I didn't even know existed.”

History of the Water Tower

The Water Tower Recreation Center is named for the historic 125-foot-tall Chestnut Hill Water Tower nearby, which dates back to 1859. It was in use until around 1917 when it was damaged by a storm.

Construction of the recreation center began in 1919 and took two years to complete. Designed in a Classical Revival style, the original stone building has four large Doric columns atop a staircase that Kunz referred to as “our mini Art Museum steps.” In 1929, construction began to add wings to either side of the center.

It's also part of the Kunz family's heritage. Their kids are involved in athletics here, and Keith's grandmother, Orvilla Kunz, ran the center from the 1940s to the 1960s. He said his family has been on the center's board for 80 years, and a plaque on one door honors his parents, Kenneth and Alexine. After his father passed away in 2016, Keith took over his seat on the Water Tower Advisory Board, and was elected president shortly afterward.