Japheth and Suzanne Brubaker, owners of Water and Rock Studio at 8109 Germantown Ave., show why yoga is more fun with furry four-legged friends. by Len Lear I tried to have a conversation with … 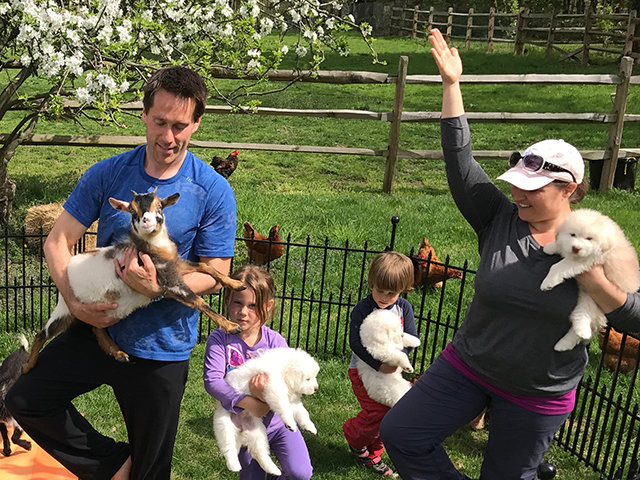 Japheth and Suzanne Brubaker, owners of Water and Rock Studio at 8109 Germantown Ave., show why yoga is more fun with furry four-legged friends.

I tried to have a conversation with my pet goats today, but they kept butting in.

I told my parents that I wanted to raise goats for a living, but I was only kid-ding.

Enough with the puns already. Japheth and Suzanne Brubaker, who opened Water and Rock Studio at 8109 Germantown Ave. in June of 2013, introduced a new concept to the Philadelphia area on May 7 that is not a joke called Goat Yoga. (The couple characterize their business as “a whole-body, personalized training studio that specializes in yoga, martial arts, functional fitness and self-defense.)

The energetic couple, who also opened a second location in Glenside recently, live in Chestnut Hill. They moved to the area to be closer to Japheth's family in Chestnut Hill when Suzanne was pregnant with her second child. (The children are now 3 and 5 years old.)

Born on a farm in Lancaster County, Japheth, now 41, later moved to Chestnut Hill and graduated from Germantown Friends School before attending the University of Pennsylvania and later Marymount University, where he earned a graduate degree in business. As a kid, Brubaker played organized sports, including martial arts, and always tried to stay active. It wasn’t until he finished grad school and moved to the D.C. Metro area and worked as a consultant that he realized his lifestyle had become sedentary and problematic to his overall health.

Brubaker gained weight, developed high blood pressure and was diagnosed with Hashimoto’s thyroiditis, a thyroid disease. With the coalescence of these issues, he was put on multiple medications to combat his ailments and his low physical and mental energy. “We are increasingly becoming more and more unhealthy as a society because most of our jobs are sedentary with very little activity,” he told us in an earlier interview.

Brubaker made it a point to alter the trajectory of his life. He got involved in martial arts, specifically Brazilian jiu jitsu, which eliminated his need to take medication. This decisive change redirected him to pursue a career in health and fitness. In 2008, Brubaker began managing a CrossFit gym, teaching mixed martial arts and instructing yoga and private training. He became a personal trainer and manager at one of the largest fitness clubs in the country, using his experience to help others. “The more I did, the more I just loved it,” he said.

This experience led to the opening of the Water and Rock Studio, but what on earth led to their offering “Goat Yoga” beginning May 7? “I had seen the viral videos and articles on Goat Yoga in the New York Times, Huffington Post and on CNN and thought it was very cool,” explained Suzanne, 39, just before Goat Yoga began. “What a great idea to combine animals and yoga, I thought! It gives a whole new meaning to the animal poses in yoga.

“Anyway, a student of mine sent me a video of Goat Yoga because she knows how much I love animals, and she suggested that I start a class. It just so happens that my family had just started volunteering at Rose Bridge Farm (in Dresher) a few weeks before, so I asked the owner, Kristin Sutch, what she thought, and she loved the idea! She runs a wonderful farm with super friendly, adorable, happy and well-cared-for animals, and she encourages them to interact with humans as much as possible.”

What is Goat Yoga? According to Wikipedia, it is “the breath-taking, smile-inducing fitness trend sweeping the nation since 2016. Do you want to find your physical and mental center and reap the psychological benefits of animal-assisted therapy? Or do you just really like the idea of stretching while hanging out with adorable goats? If so, then Goat Yoga is definitely for you.”

Suzanne, who was a school psychologist for 10 years in Fairfax County, Virginia, before leaving that career to help open the Chestnut Hill business with Japheth, said that the Animal Farm Yoga classes are being held on Sundays, 9 a.m., through June 11 at Rose Bridge Farm. If the goats are not cute enough, there may also be lambs, bunnies, ducks and/or puppies strolling around to interact with the people stretching. “Animals are natural yogis,” insists Suzanne.

During class, the animals are in the pasture with people, weather permitting, possibly even on the backs of people, and in the barn if it is raining. “Due to their friendly nature,” said Suzanne, “they will likely be interacting with the students. Students are welcome to interact — and snuggle — with the animals following yoga!

“More and more research is supporting the mental and physical benefits of connecting to nature and to animals. While I think most people will be drawn to this because of the excitement of something new and interesting, I think that yoga and the animals — and even some laughter — will work their magic, and people will find that they begin to feel rejuvenated, relaxed and less stressed with each class ...

“Deciding to quit our jobs and start a business from scratch in a new city while we had a toddler and a newborn was a little crazy! And even now, juggling two young kids and a fairly young business creates quite a bit of stress, both good and bad…

“Japheth always told me to do what I'm passionate about, though, and people will feel that, and they will love it because I do ... What an amazing thing to do what you love! That's not to say it's always easy, because it gets really, really hard; I think any business-owner will tell you that. But in those hard times we remember why we do this, and it works itself out.”

All I can add to Suzanne's comments is the eternal question which may nor even have an answer: Do hairless goats wish they had mohair?

For more information, visit waterandrockstudio.com or call 215-360-3085. Len Lear can be reached at lenlear@chestnuthilllocal.com. Kevin Dicciani also contributed to this article.