Want to feel Italian? Ride a Vespa all around the Hill!

Debra rode her Vespa down Ardleigh, up Highland and around Willow Grove Avenues, imagining she was pinwheeling down the alleyways of Rome. Then real life intervened. By Debra Malinics Perhaps I had …

Want to feel Italian? Ride a Vespa all around the Hill! 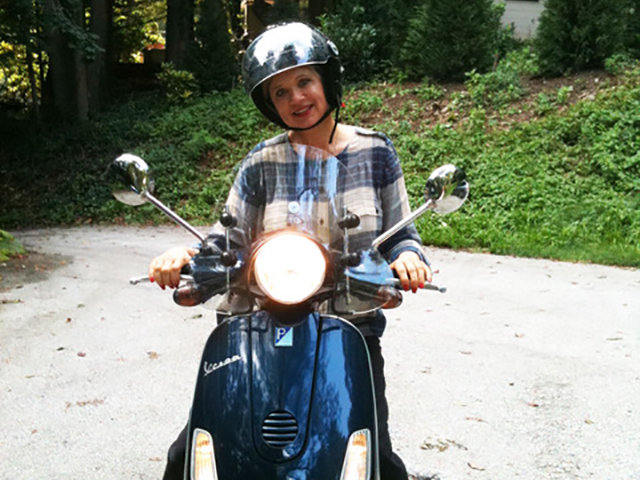 Debra rode her Vespa down Ardleigh, up Highland and around Willow Grove Avenues, imagining she was pinwheeling down the alleyways of Rome. Then real life intervened.

Perhaps I had seen too many films with chic Italian women riding their Vespas through the alleyways of Rome, off to work or an appointment, scarf flying in the wind. It seemed so exciting, and I wanted to do the same thing in Chestnut Hill. Yes, I would buy a Vespa.

My husband did not share my excitement. My friends were less than enthusiastic. I did not, however, let their lack of enthusiasm influence my decision. A beautiful midnight blue Vespa was arriving via truck in a parking lot close to our home. I planned to walk it home, keep it in the garden and learn the basics, a day or two at most.

When the Vespa was unloaded, I realized how big it was and heavy, very heavy. I could barely keep it upright, and the more it leaned into me, the more I felt that I was going to slip under it. The driver said, “Put the kick down.” I stared. “The kick, put the kick down.” I stared. He stared. He took the bike and put the kickstand down, taking the weight off my bent leg. “Oh, that’s much better” I said. He stared. I stared back.

“Well no,” and I decided not to get into the Italian thing. “OK, where do you live?” “Five houses down,” I replied. “The house with the steps? How did you plan to get the bike up those steps?” “Ummm, like a bike?” I replied. He stared. I stared. We both stared. This conversation was going nowhere. The stares were improving.

My new, 300+ pound Vespa plowed down on me as I walked it home. I looked at the sky from my 30-degree body angle, wondering how I would get this monster up the steps. They have steps in Rome; don’t they? A neighbor walked by. “Bought a Vespa? It’s easier if you start it and walk it,” he said. I stared, he stared. “Give me the keys, and I’ll take it around back for you,” he said. Our back entrance has no steps, so 10 minutes later, my Vespa was home. Yeah!

Learning to drive the bike was next. I searched the internet for “learning to drive a Vespa.” The first item was “Old Lady Drives Vespa into Wall” and showed a woman driving out of a dealership, hitting a wall while people screamed “brake, brake” as she applied gas, hit the wall and fell off but was unhurt. BTW, the woman was 40 years old. Yikes, I thought, they consider 40 years old, old?

And so, the learning began. I read the manual. I watched videos. The Vespa sounded so powerful. It was. It seemed more like a motorcycle. I thought I might have been confusing a Vespa with a moped. This was a different animal. I started practicing in a parking lot, then on streets, down Ardleigh, up Highland and around Willow Grove Avenues. Gosh, this Vespa was loud. I felt embarrassed riding it through local neighborhoods, but I was driving a Vespa! Now, I really felt Italian.

Owning a Vespa, however, was not easy. When I went for my inspection, the technician asked “Ever think about getting yourself a real bike?” “This is a real bike,” I replied. He chuckled and pointed to a bike the size of Chestnut Hill. “That is a real bike,” he said. I diverted my attention to people in the shop; no Vespas with this crowd. “What are you driving, mama?” asked a man.

“Mama!” Who calls a woman mama except her young child? I was not this man’s mama. I don’t even have children. “My name is not mama, and I’m driving a Vespa” I said proudly. “A Vespa? Geez, aren’t you embarrassed to be on a Vespa?” “Embarrassed, no. A Vespa sets the standard,” I replied. He laughed. I stared. I had this staring thing down really well by now.

I thought about my situation on the way back home, holding my shirt down in the wind as my glasses and face shield began to fog. This was fun; wasn’t it?

My helmet, the size of the galaxy, prevented me from hearing any verbal exchanges, which was good as people continued to yell out their car windows, and from their expressions they weren’t saying, “Have a nice day.” My hair got funky under the helmet and began smelling like dirt and sweat. I didn’t think I would ever get the opportunity to wear my scarf, and I still hadn’t found any alleyways. Whenever I was behind a stopped car, I had to deal with exhaust fumes, which made me nauseous. Actually, realistically I hadn’t had much fun since I bought the Vespa. I decided to sell my Baby Blue.

A wonderfully realistic woman bought the bike. She didn’t care about back alleys or flying scarves. She was functional and realistic, not at all like me. My days of being a Vespa owner were done, but I knew exactly what I would do. Buy a long, flowing scarf and wear it on a windy day. It’s so Italian!

(Ed. Note: Debra Malinics, 65, a long-time Chestnut Hiller, is the award-winning owner of Debra Malinics Advertising, a strategic communications firm in Center City, which has been in business for 39 years. More information at www.dma-adv.com)

Fall for the Arts

Our mission, your input, my promise

New for the Fall season: Being practical