Karla Geisse (left), one of the 24 volunteers from HealthShare Exchange, and Keisha Sanders, a Learning Support Special Education teacher at Houston Elementary, helped install more than 100 … 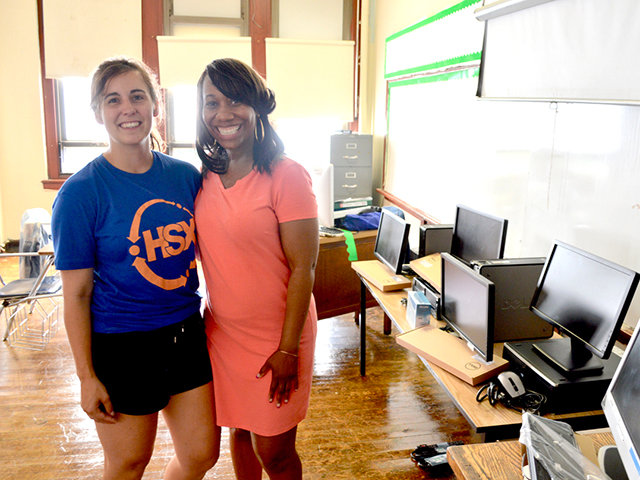 Students at Henry H. Houston Elementary School, 7300 Rural Lane in Mt. Airy, got a big surprise on their first day of school, Monday, Aug. 27, thanks to The Philadelphia Children's Foundation (PCF), a nonprofit organization that supports public schools by installing Internet-ready computers in classrooms and publicly accessible locations.

Principal LeRoy Hall said technology is a “very important element of education” and, thanks to PCF their students, will have more opportunities to “be engaged in blended learning.”

He said because of  PCF, every classroom has four to six computers.

Jewel Harmon, a fifth-grade teacher, said the children were “really excited” to see computers in every classroom. She said prior to the initiative the school had a limited number of computers it had to share.

Research has shown that students who don't have access to computers at home lack the tools they need to succeed in the classroom.

Hal Augustine, a board member at PCF, said many Philadelphia Public School classrooms do not have a single working computer.

“Schools that have or had a computer lab in the past are often riddled with malware or too outdated to run programs like Lexia or iReady teachers need,” he said. “Some schools have one or two laptop carts containing 25 or so laptops that are shared among many classrooms.”

According to a report by the Pew charitable Trust in 2017, almost 40 percent of Philadelphia children live below the poverty level.

“There are so many schools in these economically disadvantaged communities where there are no computers,” he said. “Teachers can't use any of the learning tools that are licensed by the school district because they lack access to updated computers.”

He said that  a partnership with the School District of Philadelphia allowed PCF to work with schools directly and their computers are all put on the district's network and behind their firewall.

Mt. Airy resident Jan Deruiter, executive director of PCF, said the nonprofit's computers are “an “essential tool for teachers in assisting students who are falling behind.”

Kimberly Pellak-Tana, a kindergarten teacher at Emlen Elementary School in Mt. Airy, said in a video on PCF's website that one year she had to hold back six students from going into first grade because they were having difficulty reading. However, thanks to PCF's computers  the students “were able to learn the language they needed to move onto first grade and even passed their peers.”

Besides providing Houston with 110 new computers, PCF also fixed Apple desktop computers in the school’s computer lab that were not functioning.

Deruiter said the donation was made possible thanks to a grant from the Matthew Pellegrino Memorial Foundation, which paid for all of the networking, power strips and refurbishing parts, and the HealthShare Exchange employees who helped install the computers, fix existing computers and remove old outdated computers.

Deruiter said “everyone worked together to provide our students with the technology they needed to succeed.”

He added that the creation of the Houston IT-Club (to maintain the equipment over time) was made possible by a StartupPHL grant, the Drumcliff Foundation, and other financial donors to PCF.

Besides installing computers in classroom or community centers, PCF supports students by creating “Tech-Masters,” which creates and nurtures small IT support teams inside schools to install and maintain donated equipment and computer literacy programs such as 3D printing, website building, hardware basics/refurbishing, networking and coding.

Currently, PCF has more than 1,000 computers in storage, but desperately needs funds and volunteers to install and refurbish the computers. Augustine said the nonprofit is having an impact, but operates on a “shoestring budget.”

“We have been contacted by as many as 30 schools last year for support, but we just don't have the money to do it,” he said.

Unfortunately, until the funds are raised to refurbish and install the free computers, they will sit collecting dust in PCF's warehouse.

To make a donation to PCF or volunteer, go to phillykids.org or call (215)242-5115. All donations are tax-deductible.