Violet from Tennessee does not blossom in N.W. Philly

Violet from Tennessee does not blossom in N.W. Philly 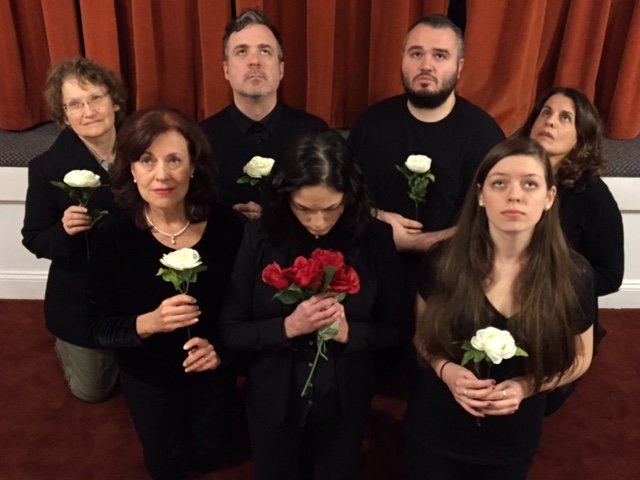 The closer Tennessee Williams got to his troubled family the better his writing became. Now running at Old Academy Players, “Suddenly Last Summer” (1958), was one of several plays rooted in painful memories of his southern belle mother and his mentally disturbed sister, Rose.

The plot is simple and savage. Aging New Orleans matron, Violet, lost her son Sebastian while he was on vacation at a Spanish beach. She placed his traveling companion, cousin Catharine, under psychiatric care. Violet now wants the psychiatrist to perform a lobotomy to stop young Catherine's "lies" about how Sebastian died.

Director Rob Rosiello comes up with a few nifty tricks. You sometimes see a character off-stage through a translucent white sheet, and lighting is dramatic. But Rosiello is careful not to distract; he keeps the focus squarely on the women, and their showdown is so intense that “Suddenly” could succeed as radio drama.

Sandra Hartman dominates the stage in the early going. With her understated approach, she brings out Violet's ruthless and imperious nature. Violet is also recovering from a slight stroke, and you sense that her vain denial of personal weakness only makes her more vicious.

The psychiatrist, Dr. Cukrowicz (Brian Jason Kelly), keeps asking the women questions and serves as a kind of straight man. But the other characters in this cozy family circle are compelled to obey Violet's will, reinforcing your sense of Catherine's vulnerability.

So, when Catherine does come to the fore, she seems doubly heroic. Not only has Violet stacked the cards against her, but Catherine also has to struggle with her emotional fragility. Caitlin Riley suffuses her character with a stunning array of nervous gaits, twitches and changes in facial expression. You truly believe how hard it is for Catherine to speak truth to power.

Yet, the horrible truth slowly creeps to the surface, and Tennessee Williams is at the high point of his power as a "Southern Gothic" storyteller. Though Catherine and Violet rarely speak directly to each other, the play turns into one of the strangest cat fights you will ever see.

Williams’ beloved sister, Rose, underwent a lobotomy, and Williams used her pain in writing his masterpiece, “The Glass Menagerie.” In “Suddenly…,” it seems he felt the need to honor Rose's suffering more directly. And maybe Williams even had himself in mind when Catherine says, "We all use each other, and that's what we think of as love."