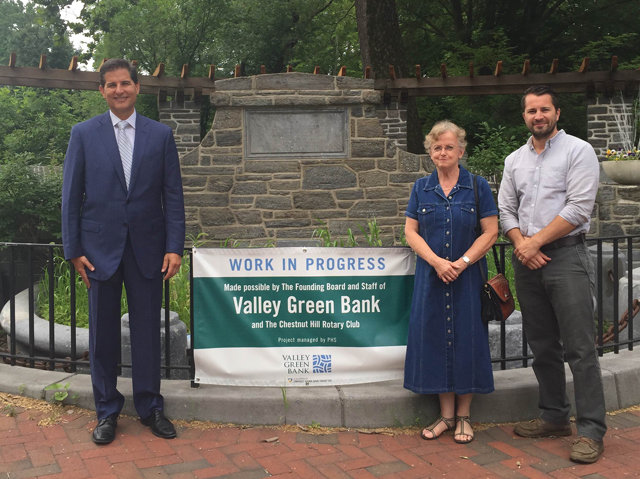 History hides at the crossroads of Cresheim Valley Drive and Germantown Avenue in two unassuming, wooden pergolas with historically strong foundations. Originally operating as water troughs for horses in the 1700s, the structures now represent the relationship between Chestnut Hill and Mount Airy and hold deep significance for the birth of Valley Green Bank.

In collaboration with the Chestnut Hill Rotary Club, Valley Green Bank launched the Cresheim Valley Drive Pergola project, a major restoration and beautification initiative as a gift to commemorate Valley Green Bank’s deep gratitude and appreciation for a decade of overwhelming support from the community.

“Together we hope to improve the visibility and appearance of both the pergola and the arch to restore them to a position of importance in the communities,” said Lesley Seitchik, director of marketing for Valley Green Bank.

The bank first planted its roots in Mount Airy in 2005 and started a second branch in Chestnut Hill the next year, running as an independent bank until it merged with Univest Bank and Trust Co. at the beginning of 2015.

The project consists of landscaping, removing invasive understory trees, replacing the rafters, securing the masonry, repointing all joints, cleaning the structures, rebuilding parts of the wooden pergolas, and installing a lighting plan to highlight the monuments in the evenings.

“The board and staff wanted to do something within our capacity to give back to the Chestnut Hill and Mt Airy communities,” said Jay Goldstein, founding president and CEO of Valley Green Bank. “We believe the pergola is an iconic, identifiable landmark within our neighborhood and enjoyed by residents and visitors.”

For the running of a smooth plan, Valley Green Bank hired the Pennsylvania Horticultural Society (PHS) to manage the project. In conjunction with PHS, Awbury Arboretum, Steve Priess a local mason, and Clearkin Construction also took part in the initiative. PHS additionally plans to plant the area with native understory trees this fall with help from volunteers and the local Tree Tender’s group.

“It’s nice working with local contractors on this site,” said Connor Stanton, project manager for PHS. “We all have a sense of pride for the pergolas since we drive by them every day.”

The Rotary Club recognized what needed to be done, but even with the grant from the Chestnut Hill Community Fund, the initiative required more support.

“It’s wonderful to have Valley Green Bank come in and provide all the additional funding to completely refurbish the pergola and arch,” said Christina Spolsky, secretary for the Chestnut Hill Rotary Club.“ Now we have a much more visible and attractive gateway.”

The project is currently underway, and a ribbon-cutting ceremony will conclude stage one of the project.