Christine Jorgensen was a transgender woman from New York who in 1951 was the first person to become widely known in the U.S. for having sex reassignment surgery. She had been a soldier in World War … 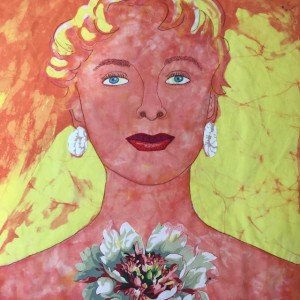 Christine Jorgensen was a transgender woman from New York who in 1951 was the first person to become widely known in the U.S. for having sex reassignment surgery. She had been a soldier in World War II.

Many of the world's most famous artists, past and present, have gained fame and worldwide acceptance for their representational paintings of stunning landscapes, floral arrangements, adorable animals, portraits of joyous faces, etc. Not Carolyn Cohen.

An award-winning Montgomery County artist for the past 13 years whose works were exhibited in just the past year at galleries, arts centers and other venues in Manhattan, Brooklyn, New Hope, Wichita, Kansas; Fort Collins, Colorado; College Station, Texas; Rochester, New York, and numerous Philadelphia sites, Cohen has an extraordinarily powerful collection of her works now on exhibit through April 30 at the Muse Gallery, 52 N. 2nd St. in Old City.

Carolyn, 50, is a textile artist and photographer best known for her work around social justice issues, particularly regarding the brutalization of women, children and the LGBTQ community. Her compelling, dramatic representations now at the Muse Gallery consist of textile work and paintings that pay homage to the LGBTQ community, portraying both heroes and victims within this community.

Some of Carolyn's subjects have endured brutality and suffering almost too horrific to contemplate. For example, Irum Saeed, 30 (an image from a previous exhibit), a teacher at the Urdu University of Islamabad, Pakistan, was burned on her face, back and shoulders 12 years ago when a boy whom she rejected for marriage threw acid on her in the middle of the street. She has undergone plastic surgery 25 times to try to recover from her scars.

Another subject, Leelah Alcorn, was raised in a conservative Christian household in Ohio. At age 14, she came out as transgender to her parents, who refused to accept her female gender identity. When she was 16, they denied her request to undergo transition treatment, instead sending her to Christian-based conversion therapy with the intention of convincing her to reject her gender identity and accept her gender as assigned at birth.

After she revealed her attraction toward males to her classmates, her parents removed her from school and revoked her access to social media. When she was 17, Leelah committed suicide by walking out in front of oncoming traffic on the Interstate 71 highway. In her suicide note, Alcorn cited loneliness and alienation as key reasons for her decision to end her life and blamed her parents for causing these feelings.

Cohen created the art work in her current exhibit to provide a face to those who are faceless, nameless and powerless. “I think that this current exhibition is important,” said Cohen, “because it draws attention to the people who have made up the LGBTQ movement and calls attention to their struggles as well as their triumphs. I have documented these struggles and triumphs in wall text that accompanies each work.

“I think this exhibition is especially important, given how many people in the heterosexual community have no idea who Harvey Milk is, who RuPaul is or who Christine Jorgensen and Robert Mapplethorpe are. I think this is because people often don't pay attention to people or news that is outside their own direct community and the comfort zone of their own community.”

According to Cohen, the reaction to the exhibit so far has been overwhelmingly positive. “At the opening many people came up to me to thank me for doing this work. Many people have said that they have never seen work like it. The hand-embroidered batik seems to be somewhat unique.”

Much of Cohen's work consists of batiks, which are textiles created by dying over a wax resist; the areas that are waxed do not take the dye. Finally, the wax is removed, leaving a work of art with multiple layers of color. Cohen then hand-embroiders each work to accentuate certain parts. She also works in watercolor because she likes “the spontaneous, immediate nature of the process. Unlike batik, which can take days or weeks to complete, a watercolor painting can be done in a matter of minutes.”

Cohen, who always wanted to create art that told a story, grew up in a suburb just outside of Rochester, New York (Brighton). She went to Kenyon College, where she received a B.A. in Fine Arts/Painting, graduating in 1987. She received an MFA from the University of Pennsylvania in 1992.

“This (her time at Penn) was wonderful in that I was able to devote my time to making art, but apart from that it was a very negative experience because so many of the male faculty were less interested in teaching and more interested in hearing themselves speak. I found it to have a very misogynistic atmosphere. 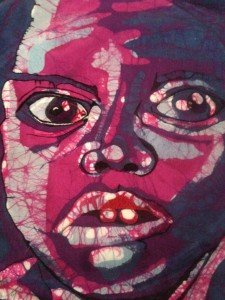 This is Carolyn’s “Lost Child.” Worldwide, approximately 40 million children below the age of 15 are subjected to child abuse every year.[/caption]

“Art school was not a great experience for me since I found it very constraining. After graduating, I became interested in self-taught artists and began experimenting on my own with different media. I tried to forget what I had been told in art school and instead to focus on what was in my head and heart.”

From this current show, Cohen “loves the image of Brandon Teena because I love the shadows that encompass his face; the lights and the dark are very striking. I also love the vibrancy of color in the image of RuPaul — the blue outlines against the mostly orange skin.”

What was the best advice Carolyn ever got? “Probably that today's problems become tomorrow's jokes. No matter how hard something is at the time, five years later we can usually laugh about it.”

What are Cohen’s greatest regrets in life? “Spending too much time worrying about what others might think and not living fearlessly enough.”

What skill would she most like to have outside of her art? “I think that it would be amazing to be a dancer. Using one's own body in the creation of art seems like the most direct way of self-expression.”

What are Carolyn’s most treasured possessions? “Not including the people in my life, it would be the photographs from my past. They document my life, reminding me of people, places and times that I might otherwise forget.”

For more information about the current exhibit, call 215-627-5310 or visit www.carolyncohenart.com.