Unique exhibit at CHC; works by artists with dementia

Unique exhibit at CHC; works by artists with dementia 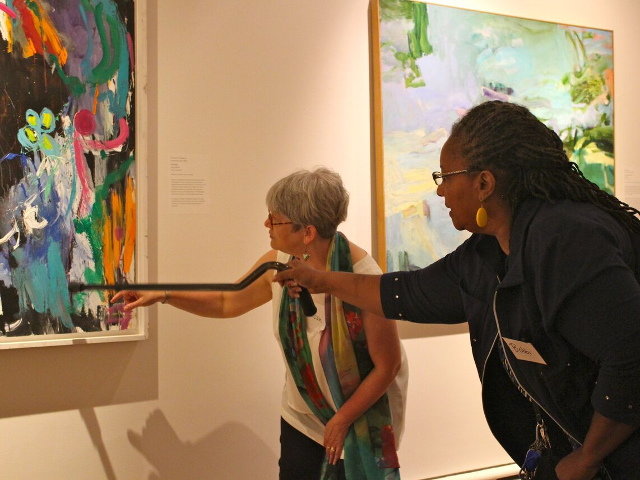 Susan Shifrin, PhD, co-curator of “Seeing Hope in Color” at Chestnut Hill College, Oct. 31 through Nov. 18, doesn’t want visitors to merely enjoy the second annual ARTZ Philadelphia exhibition; she wants them to be changed by it. All of the watercolors, collages, prints, textile weavings and sculptures in the exhibition were created by people with dementia and some by their caregivers.

“Dementia is one of the last disabilities to be fully understood and accepted by our area’s cultural institutions and by the public,” said Shifrin, 55, founding director of ARTZ Philadelphia, a non-profit organization which seeks to enhance the quality of life of people with dementia through exposure to the arts.

“While most museums, theaters and concert halls are wheelchair-accessible and welcoming to the blind or hearing-impaired, there remains a disconnect when it comes to dementia and Alzheimer’s. There is a lot of misperception, ignorance and fear. We want to present an alternative narrative to the message that’s out there. Our mission is to remove the stigma of people with dementia visiting cultural institutions throughout Greater Philadelphia.”

Among the common misperceptions is that Alzheimer’s and dementia are the same. According to Shifrin, there are at least 130 different types of dementia, and only 60% are said to be of the Alzheimer’s type. “While some people in early stages of dementia may experience only mild cognitive impairment, others may lose the ability to communicate verbally. Our job is to create a space in which all feel engaged, all have their say.”

In seeking to launch ARTZ Philadelphia in 2013, Shifrin found an enthusiastic partner in Woodmere Museum of Art. “Hildy Tow, Woodmere’s education curator, has been incredibly supportive in every way. Hildy is an artist, so we sometimes collaborate to offer programs where people living with dementia can interact with the museum’s permanent collection and participate in making art,” said Shifrin. “Our exhibition at Chestnut Hill College this year is the beginning of what we hope will be a long partnership with Woodmere, Chestnut Hill College and ARTZ Philadelphia.”

One couple drives all the way from Bethlehem because the husband, who has dementia, becomes more fully engaged when he is at the Woodmere ARTZ program. “They feel more relaxed with us in a group of people all looking together at art than when they are on their own and their attention turns inward to their illness,” said Shifrin. Participants in ARTZ Philadelphia programs currently come from all over the Greater Philadelphia area, including people living at home and in several long-term care communities in Chestnut Hill, Mt Airy and Germantown.

Shifrin is quick to point out that ARTZ Philadelphia is not an art therapy program. “We’re not carrying out therapy in a clinical sense. We are creating programs in which people with all levels of dementia and their care partners have an opportunity to interact with art, artists and each other. We are also educating members of the community and institutional staff how to create a safe and welcoming environment.”

An art historian and former director of education at the Berman Museum at Ursinus College, Shifrin reached out to ARTZ/Artists for Alzheimer’s, based in Boston. She recalls, “Their co-founder came to our museum and worked with us and the community to create a new program specifically designed to be responsive to the needs of visitors with dementia.”

Three years later, Shifrin left the Berman Museum and became a woman with a mission. She established ARTZ Philadelphia, initially as a mid-Atlantic affiliate of ARTZ Boston. They were the only organization in the country that trained museum professionals to work with people with dementia at all stages of illness.

Among the many artists involved with the organization is Mt. Airy’s Sara Steele, who received the 2015 ARTZ Philadelphia’s Community Catalyst Award in recognition of her magnanimous generosity. “Sara donated large quantities of her beautiful prints and calendars, which our participants then used to create collages and other works of art,” said Shifrin.

Steele will be presenting the 2016 Community Catalyst Award at the exhibition opening reception to Dr. Florence Gelo, Associate Professor of Family, Community & Preventive Medicine at Drexel University College of Medicine, where she leads medical humanities programs. In her private practice, Gelo is a psychoanalyst specializing in grief, loss and chronic illness. She also serves in the docent program at Woodmere Museum.