Local author Irene Levy Baker needs huge utensils to eat at all 90 Philadelphia restaurants and food outlets she writes about in her new book, “Unique Eats and Eateries of Philadelphia.” Her … 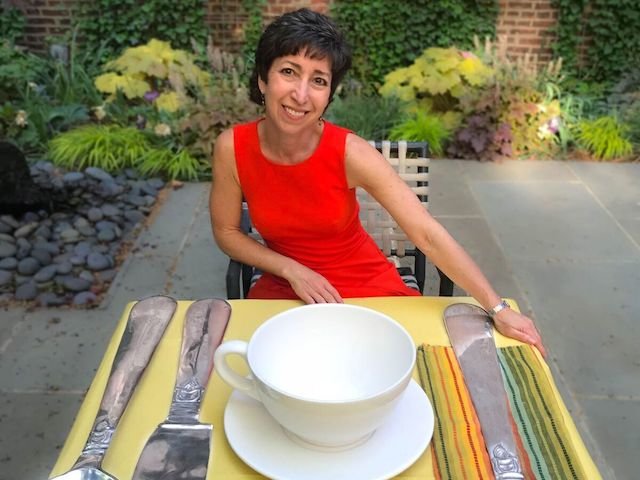 Local author Irene Levy Baker needs huge utensils to eat at all 90 Philadelphia restaurants and food outlets she writes about in her new book, “Unique Eats and Eateries of Philadelphia.” Her research for the book was exhausting. (Photo by Rachel Baker)[/caption]

As every foodie knows, Philadelphia has gone from being a culinary desert in the 1960s to one of the greatest restaurant cities in the country. If you can afford it, there is an endless array of restaurants for every taste, palate and ethnicity.

And if you just can't get enough information about Philly's greatest eateries, then “Unique Eats and Eateries of Philadelphia” is for you. The just-published paperback (Reedy Press, $20.95) by Irene Levy Baker, who lived in Elkins Park for more than 20 years but now resides in Center City, is not a book of critical reviews. Instead, it is full of delicious human interest features about the city’s most fascinating restaurants, chefs and other food merchants.

Discover, for example, how two chocolatiers got engaged; learn about dinners interrupted by a bungled mob hit; restaurants that survived an earthquake, a fire and even Prohibition; a secret restaurant that began in a backyard tent; a water ice stand that started in a garage and a vodka distiller who bottled spirits in his parents’ basement.

The book includes the inside scoop on more than 90 of Philadelphia’s upscale restaurants, BYOBs, ethnic restaurants and fast casuals, as well as bars, bakeries and breweries — any place with an interesting story and good food or drink.

You might wonder, as I did, why an author would write such a book, as interesting as it is, when there is already a Mount Everest of information available about all of these businesses on the internet.

“I thought of myself as a food detective, uncovering stories you won’t find on the internet,” answered Baker, owner of Spotlight Public Relations, which specializes in restaurants and hospitality. “Plus, someone once told me that reading my first book ('100 Things To Do In Philadelphia Before You Die') was like talking to a friend because I share lots of tips.

“I tried to keep that in mind when I was writing 'Unique Eats,' sharing the scoop on how to get reservations, where to spot celebs, how to get into the city’s secret speakeasies, where to get a free bowl of soup at lunch and more. By the way, if you Google 'Philadelphia restaurants,' you get 260 million hits, so readers might be relieved that I narrowed it down to 90.”

Doing all of this “research” had to be exhausting, but Baker was unselfishly willing to sacrifice herself. “Staying on top of openings and changes can be nearly a full-time job,” she conceded, “but someone has to answer everyone’s questions about where to take their parents, college roommate, colleagues, etc. The actual interviewing and writing of the book took about 18 months. It was hard; chefs and restaurateurs aren’t sitting in offices answering calls and emails. They’re on their feet all day and night in hot kitchens. I had to be very persistent.”

Can Baker tell us what her favorite restaurants are? “My favorites are always evolving as new places open, my mood changes or I discover new things. I crave the Turkish coffee tehina shake at Goldie, the raviolo vasto at Palizzi Social Club, the corned beef Reuben at McGillin’s, the beef tartare toast at Vernick, the mushroom pizza at Metropolitan Cafe ... I could go on and on, and they all taste better knowing the stories of the restaurants and chefs behind them.”

What were Baker's favorite human interest stories that she discovered in the course of doing the book? “I love the story of how the founders of John & Kira’s Chocolates got engaged. I love that Blanche, the cat at Greensgrow Farms, was named employee of the month, even though she was often late for meetings. And I loved writing about places that had been passed down through the generations, like DiBruno Brothers, Bassetts and Oyster House.”

How does Baker feel about the websites like Yelp.com in which anyone and everyone can express an opinion about any meal or restaurant? “I could write a whole book on how I feel about Yelp. I think that if you’re unhappy with something at a restaurant, politely talking to a manager and giving him/her a chance to make you happy while you’re still there is much more productive than complaining about it later online.”

“Unique Eats” is available from Baker's website, www.UniqueEatsPhilly.com. It is also available on Amazon, at Barnes & Noble and independent bookstores, including Big Blue Marble in Mt Airy. Baker will sign and discuss the book on Monday, Sept. 24, 7 p.m., at Creekside Co-op, 7909 High School Rd. in Elkins Park. Tickets to the event can be obtained from www.UniqueEatsPhilly.com or the night of the event. Len Lear can be reached at lenlear@chestnuthilllocal.com