Joe Kulkosky, Ph.D., works with Julia Bacon-Henderson after the students cultured bacteria from various lab surfaces as an investigator would do at a crime scene. (Photo by Brenda Lange) By Leslie … 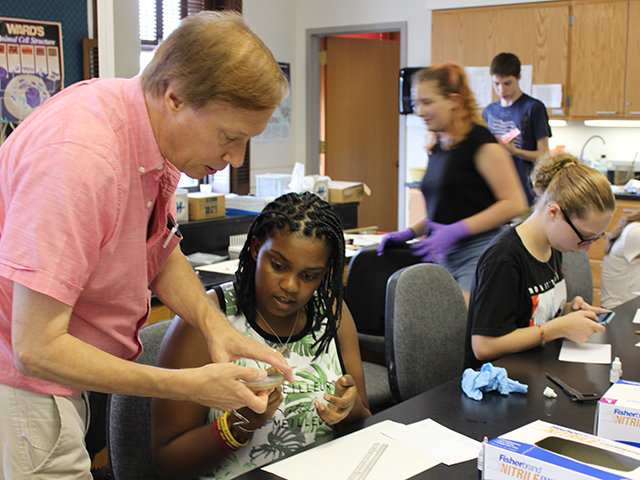 Joe Kulkosky, Ph.D., works with Julia Bacon-Henderson after the students cultured bacteria from various lab surfaces as an investigator would do at a crime scene. (Photo by Brenda Lange)

Crime scene investigation (CSI) is hotter than ever. Just count how many CSI shows there are on television. And now Chestnut Hill College is offering students, grades 5 through 12, a chance to learn about how their favorite detectives use science to figure out seemingly unsolvable thefts, arsons, mysteries and more.

Returning for its fourth year, Chestnut Hill College’s (CHC) Forensic Sciences Summer Camp, led by Joe Kulkosky, Ph.D., professor and chair, Department of Biology, offers campers the chance to learn how to collect and analyze crime scene evidence such as serology, toxicology entomology, odontology and trace evidence. It also provides students — who uniformly give the course an “A+” — hands-on experiences in several professional techniques such as DNA typing, fingerprint classification, fabric and shoe print pattern comparisons and blood type testing.

Kulkosky says the idea for the camp came from high school students and their parents at open house campus visits asking questions and wanting information about the college’s Forensic Biology undergraduate degree program. “Students interested in forensics are really into the topic, and I thought it would be neat if students at a younger age, considering a college degree program, could have a hands-on summer experience in forensic methods to see if it really was a career path for them.”

According to an article by Brenda Lange in the latest issue of the CHC Magazine, “Cole Angstadt is a 12-year-old who loves science. He calls it 'the coolest subject' and was thrilled to be part of CHC’s Forensic Sciences Camp last summer. 'NCIS' is his favorite TV show, and working with and learning about some of the same equipment from the show was fun and unique.

“'On the show, they use a thermometer that determines the time of death, and in the camp we watched a slideshow about it,' Angstadt said. His favorite part of the weeklong program was the use of micro pipettes. 'They measure precise amounts of liquids and are more sophisticated than a glass or plastic dropper.'

“Using microscopes, taking fingerprints and footprints, measuring blood splatters and learning what they mean, doing DNA and blood type testing are all part of the collection and analysis of crime scene evidence that culminates on the last day of the camp with students solving the 'crime' — who killed Dr. K.?

“Cole’s father, Tom, said his son was at the camp because he wanted to be there, and he had to 'drag him away at the end of the day. He was very engaged, and it was a great place to expand his mind.'”

Kulkosky, a resident of Wyncote, spent most of his scientific career, over 30 years, in hard-core basic and medical research as a molecular biologist at Cornell Medical Center, Fox Chase Cancer Center and Thomas Jefferson University. He had the opportunity to teach a biotechnology course in the adult division at CHC several years ago and liked teaching and the environment so much, he decided to jump at the opportunity to apply for a faculty position at the college. He is also choir director/organist at All Saint’s Episcopal Church.

“I know of no other forensic summer camp for high-school or middle school students in the area that offers such a specific forensic summer camp experience,” said Kulkosky. “CHC is also the only institution in the state of Pennsylvania to offer dual undergraduate degrees in forensics.”

Favorite activities at the camp include isolating their own cheek cell DNA, simple blood splatter experiments using synthetic blood samples and solving “Who killed Dr. K,” where they review many samples of evidence relating to the murder of “Dr. K.”

“The students really like hands-on activities,” said Kulkosky. “I’ve been somewhat surprised at how adept they are at understanding scientific concepts and using fairly sophisticated scientific equipment. The kids who attend the camp almost always have an intrinsic interest in science, so they are really engaged in the topics and experiments. They also very much enjoy the intimate interaction with each other in our labs. They come from different schools, so they engage in a lot of conversation with each other about what’s going on in each of their own schools.”

For more information or to register, visit https://www.chc.edu/forensic-sciences-summer-camp