Turning to readers to fund the news

Turning to readers to fund the news 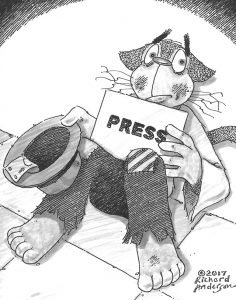 The great migration of attention span and dollars online – a migration that has been turbocharged by the advent of smartphones over the last 10 years – has done a great deal of harm to many business models and institutions.

Retail stores, the record industry, the book publishing industry and many more have been forced to undergo serious change or die trying. Perhaps no other industry, though, has been more damaged by these changes than the news industry. In 2017, news media professionals are not only expected to do more – to write, to tweet, to edit video and manage online content – but also to provide those services for nothing. It’s not a sustainable model.

Online publications pose a remarkable dilemma to all print media businesses – from the New York Times to the Chestnut Hill Local. As the opportunities to tell stories and distribute them have never been greater, the ability to support those efforts through advertising and subscriptions have taken huge hits.

In a recent CNBC report, global businesses are set to spend $583.91 billion on digital advertising, nearly 40 percent of their total budget and an 18 percent increase over last year. Of those dollars spent, Facebook and Google combined will take $106.45 billion.

Not far behind Google and Facebook are companies like Disney, Comcast and Microsoft that hoover up much of what’s left. It leaves smaller publishers with some tough competition.

Meanwhile, print ad revenue is plummeting. In a recent Atlantic magazine story on the decline of the print news business, a look at print advertising showed print revenues falling from $60 billion annually to $20 billion between 2000 and 2015. In that time, nearly half of the reporting jobs in the country disappeared.

The Local has seen a similar demise of its print ad revenue. On June 25, 1987, the Local was 60 pages, full of local ads by grocery stores, real estate companies and other small businesses. On June 29, 2017, the paper was 24 pages, many of the advertisers who supported the paper gone or no longer buying ads.

It’s difficult for news people to discuss these challenges without turning to nostalgic appeals to readers’ duty to support local journalism. It’s tough not to sound like you’re begging for business. It’s difficult to ask people to pay for online articles they’ve spent the last 25 years reading for free, but as many news organizations have found, asking readers to pay for their news may be the only avenue we have left.

Though the Local is smaller than it was a generation ago, it is still the only vehicle in Chestnut Hill that covers the community. From zoning issues and crime to the achievements of local athletes and students. Asking for support from readers and advertisers isn’t really asking for charity – it’s a recognition that this paper provides a service that nothing else does in this community, and one that many other communities don’t even have.