Turn back the clock: ‘Typewriter man’ now in Mt. Airy

Kravitz, 66, buys, sells and repairs typewriters at Moving Arts of Mt. Airy (MaMa), 6819 Greene St. (at Carpenter Lane), where he meets customers on Saturday and Tuesday afternoons and by …

Turn back the clock: ‘Typewriter man’ now in Mt. Airy 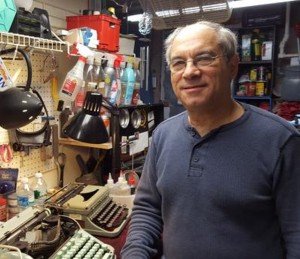 Kravitz, 66, buys, sells and repairs typewriters at Moving Arts of Mt. Airy (MaMa), 6819 Greene St. (at Carpenter Lane), where he meets customers on Saturday and Tuesday afternoons and by appointment.

by Pamela Rogow and Len Lear

By the time the computer revolution foreclosed on his skills, Philadelphia-born Bryan Kravitz was “Mr. Typewriter Man.” To young people who may have never seen a typewriter much less used one, Kravitz is probably as much of an antique as the machines to which he has an immutable connection.

Kravitz, 66, still buys, sells and repairs typewriters at Moving Arts of Mt. Airy (MaMa), 6819 Greene St. (at Carpenter Lane), where he meets customers routinely on Saturday and Tuesday afternoons until about 6 p.m. and by appointment. (One never knows about these things. Even turntables — that play records; remember them? — are now making a comeback.) “I am passionate about these beautiful machines and have been working on them since 1975,” explained Kravitz.

(The concept of a typewriter dates back at least to 1714, when Englishman Henry Mill filed a vaguely worded patent for “an artificial machine or method for impressing or transcribing of letters singly or one after another.” But the first typewriter that actually worked was constructed by the Italian Pellegrino Turri in 1808 for his blind friend, Countess Carolina Fantoni. Specimens of Fantoni’s actual letters can be seen in the 1973 book by Michael Adler, “The Writing Machine.” A 2010 novel, “The Blind Contessa’s New Machine,” by Carey Wallace, tells the story of the relationship between Turri and Fantoni. Numerous inventors in Europe and the U.S. continued working on the machine in the 19th century. Commercial production did not begin until 1870 in Denmark with a typewriter made by Pastor Rasmus Malling Hansen.)

Early on, as an 18-year-old community organizer in Germantown, Kravitz would mimeograph and distribute flyers. In the summer of 1968, a friend proposed a quick trip across the country in a Volkswagen bus. Kravitz says, “We drove almost straight to the San Francisco Bay area. My friend had a job waiting. I had no plan.“

He was dropped off on Telegraph Avenue in Berkeley and soon got a job working in a print shop. One afternoon,  a professor came into the shop to supervise an order for the local junior college. He noticed Bryan’s devotion to the mechanical processes that accomplished the printing, sorting, insertions, folding and binding and suggested that Bryan take a typewriter repair class at the local junior college trade school.

Junior college tuition in California was then almost free. Kravitz signed up for a six-week course at the John O’Connell Trade School in San Francisco’s Mission District.

Kravitz had a teacher at the trade school “who was a poetic mechanic who made the mechanical terms come alive.” Like so many other students inspired by great teachers, Kravitz was hooked. Within a month of leaving the school, he had a job at a typewriter repair shop on Market Street in San Francisco, “I was getting paid for something I have a passion for which continues to this day.

“For the next 18 months, six days a week, in the morning I would take apart the machines that came in. In the afternoon, the boss would return from outside jobs and help me identify what exactly was needed to do to complete the repair. He was from Texas and said I must have been a religious man. He said I had the patience of Job. With enough practice, even the IBM Selectric with its 1500 parts was no longer daunting.”

In 1983, Kravitz landed a job at UC Berkeley, where he maintained the hundreds of typewriters for all of the school’s 29 libraries. A few years later, he opened his own business in Oakland called “You’re My Type” and then took on a contract to teach typewriter repair for the U.S. Navy.

By 1990, however, computers began replacing typewriters, and Kravitz moved on to a direct mail business. Fast forward to 2007. California’s Silicon Valley real estate boom made life too expensive, and Bryan returned to Philadelphia, taking on various jobs in sales and marketing.

He re-grouped this year, however, as Philly Typewriter. “They’re all vintage and antique now,” said Kravitz, who has typewriters on display in a glassed-in window on 4th Street at Bainbridge, where he meets customers weekly. He also displays inventory in a big picture window in Mt. Airy, where he buys, sells and repairs typewriters and accepts hand-offs.