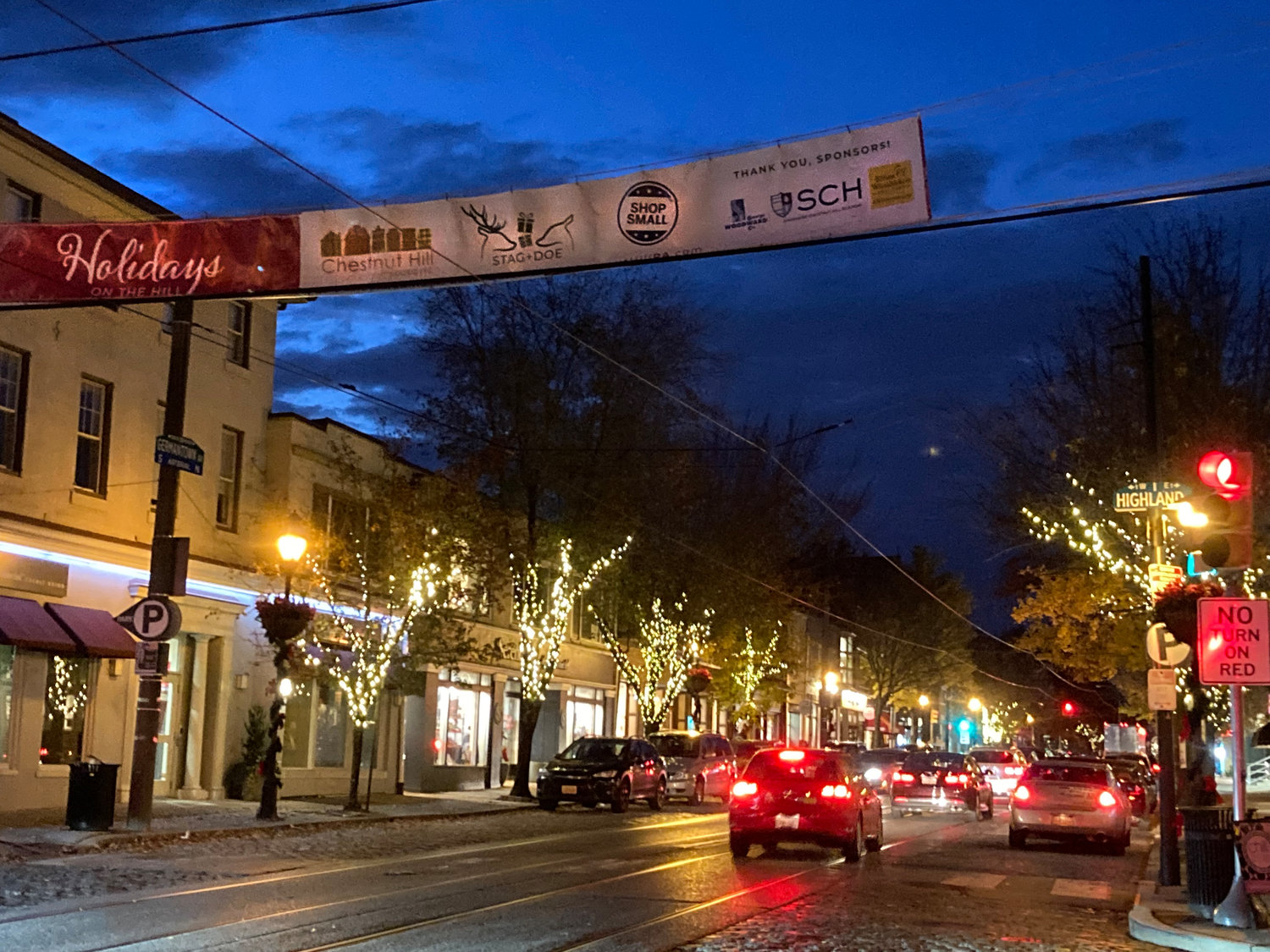 Originally for a few blocks at Christmas, the lights brighten the summer nights now as well.
Walt Maguire 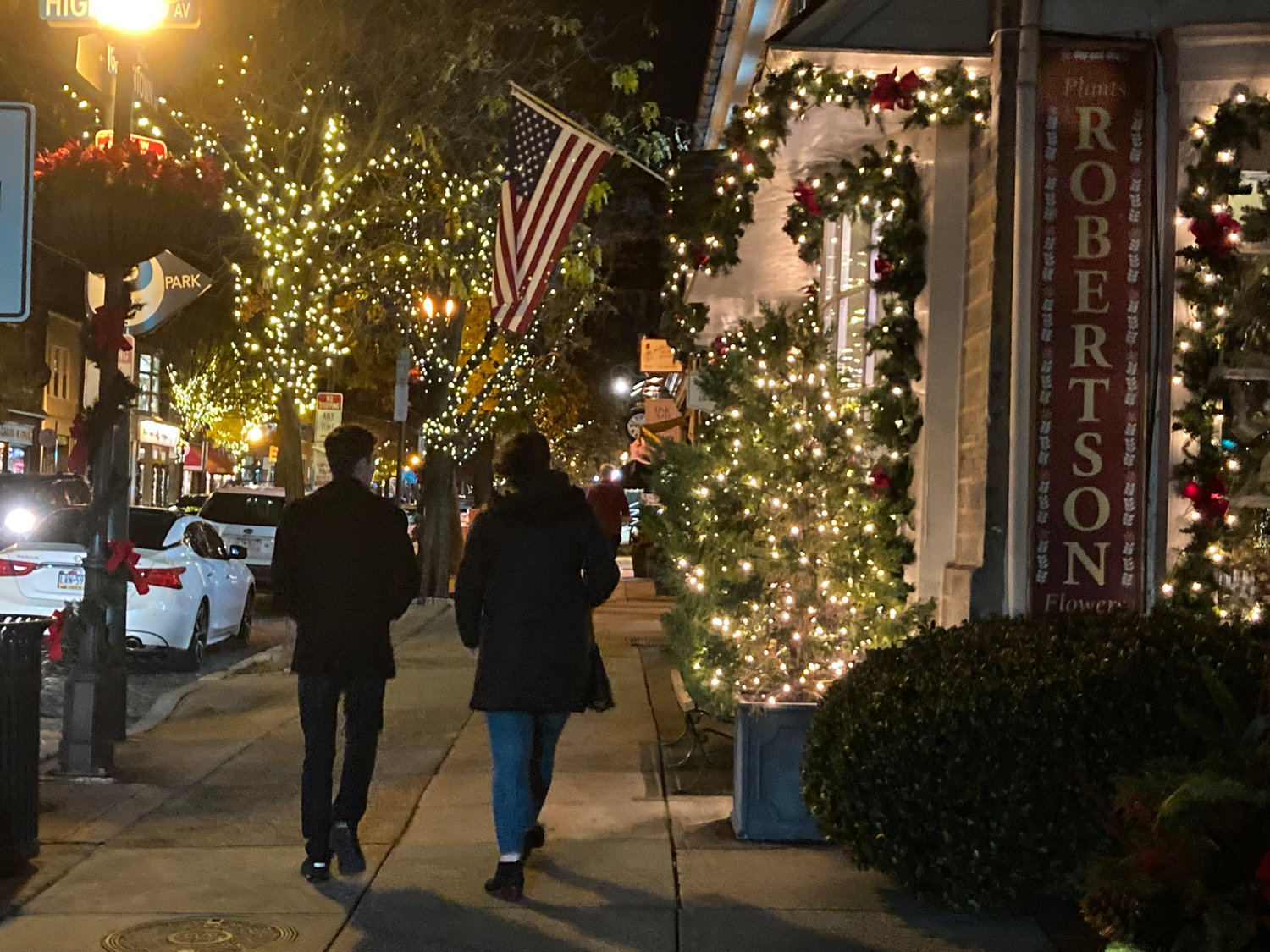 The trees along Germantown Avenue give the evenings a distinctive spirit in Chestnut Hill.
Walt Maguire 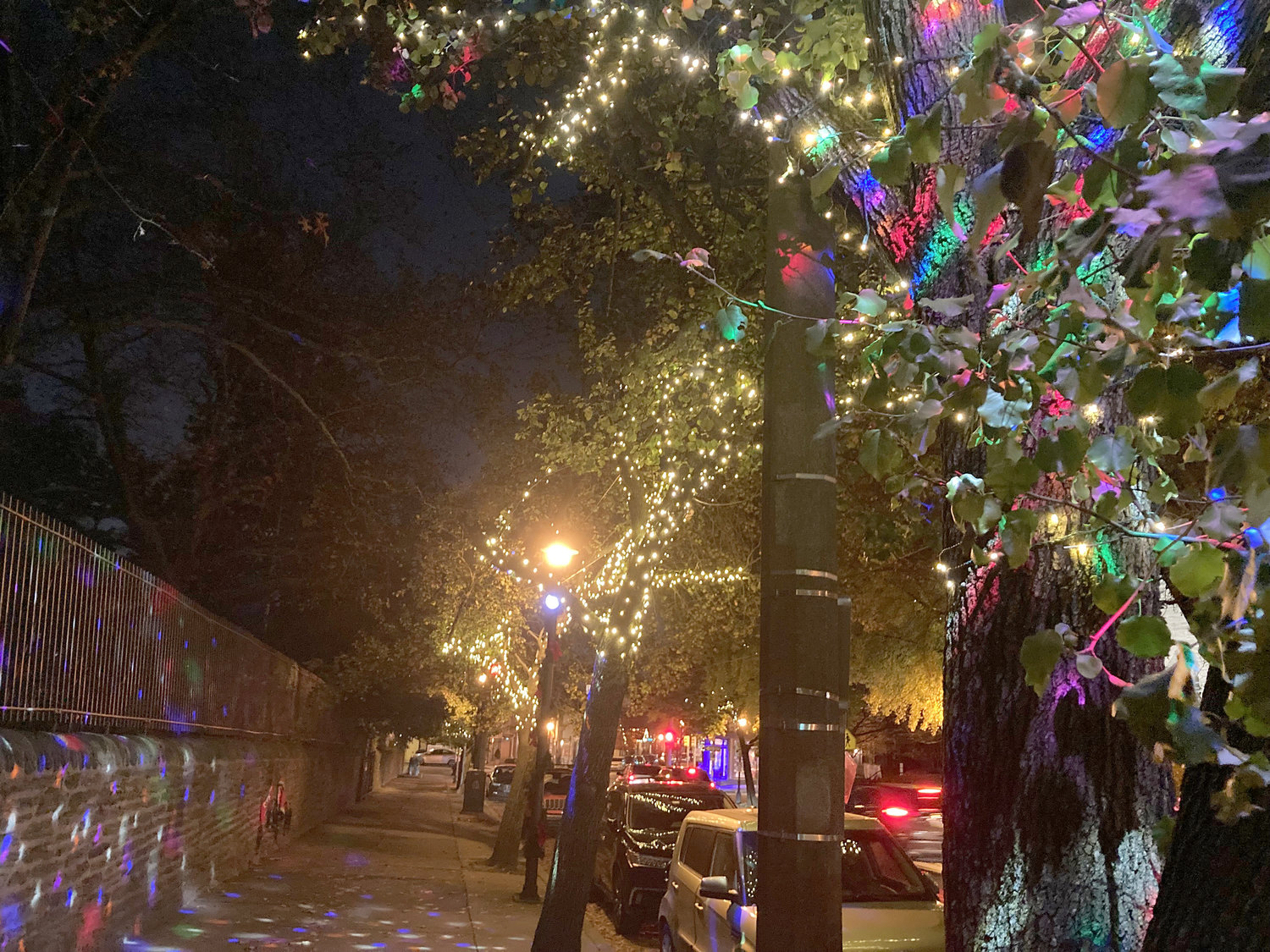 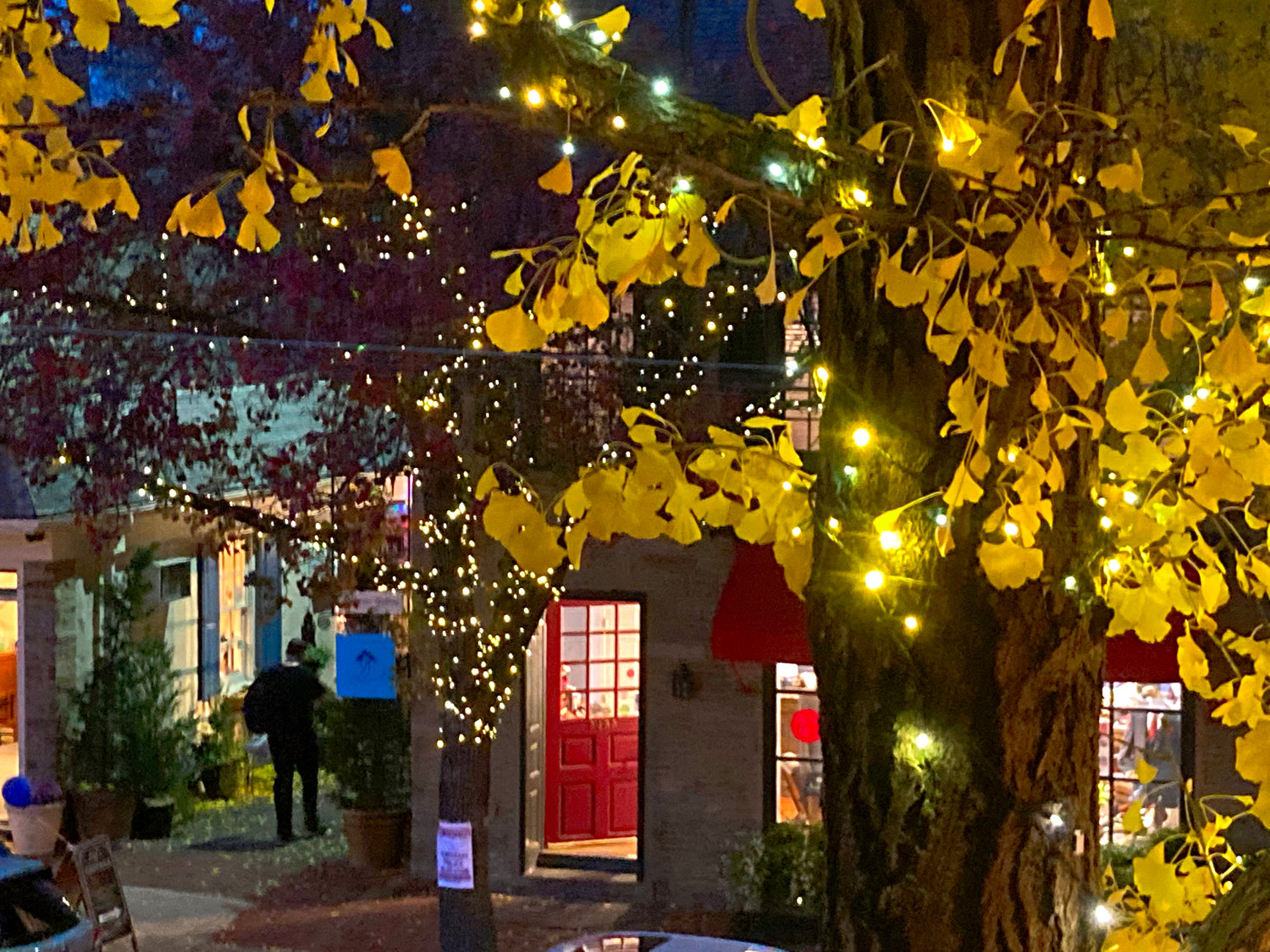 Over 160 trees light up every night. 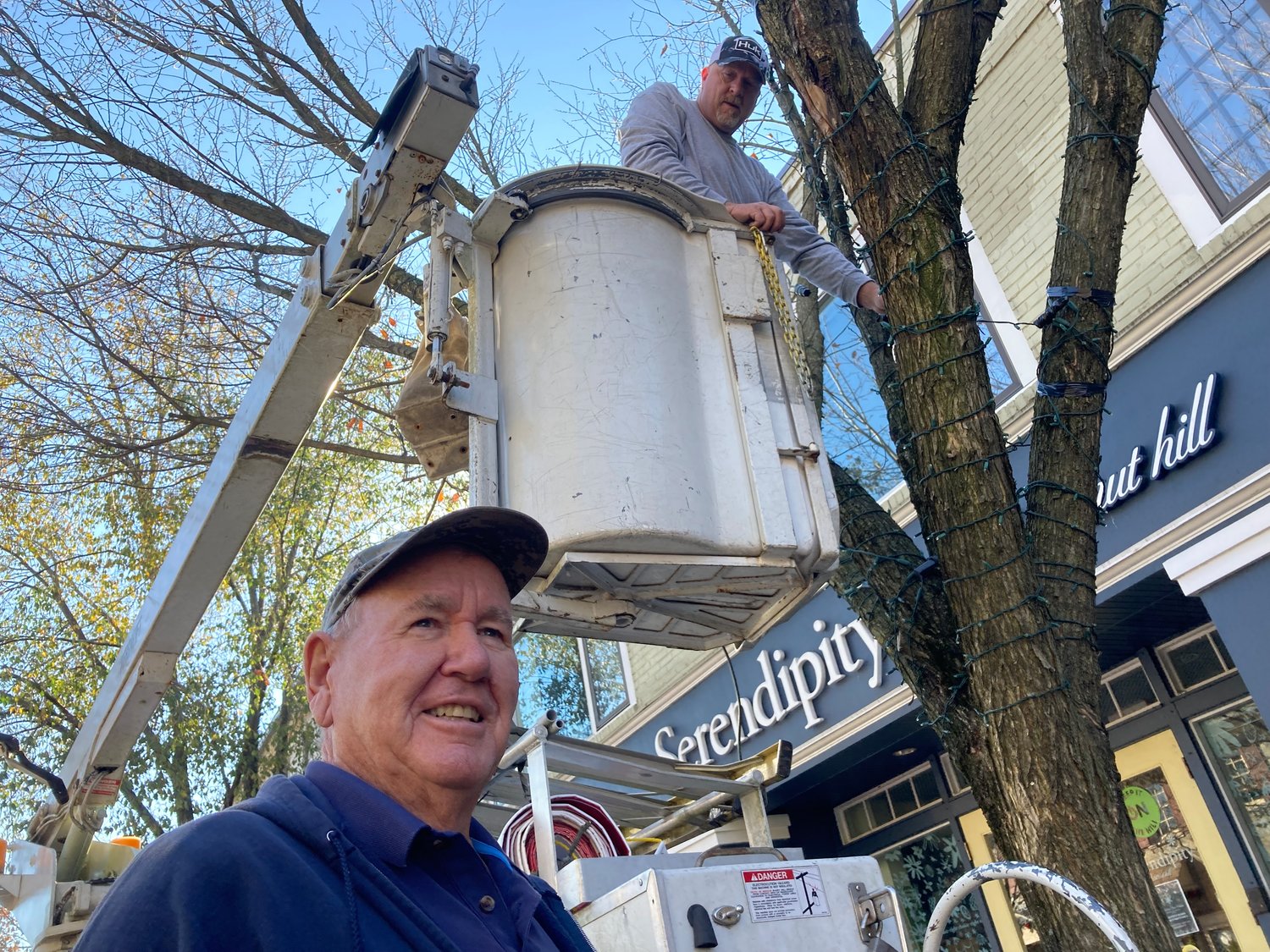 John Cairns has been tending the tree lights since 1999. Behind him, Mike Adams replaces a string of lights. Each tree averages 12-15 strands of lights, depending on the size.
Walt Maguire 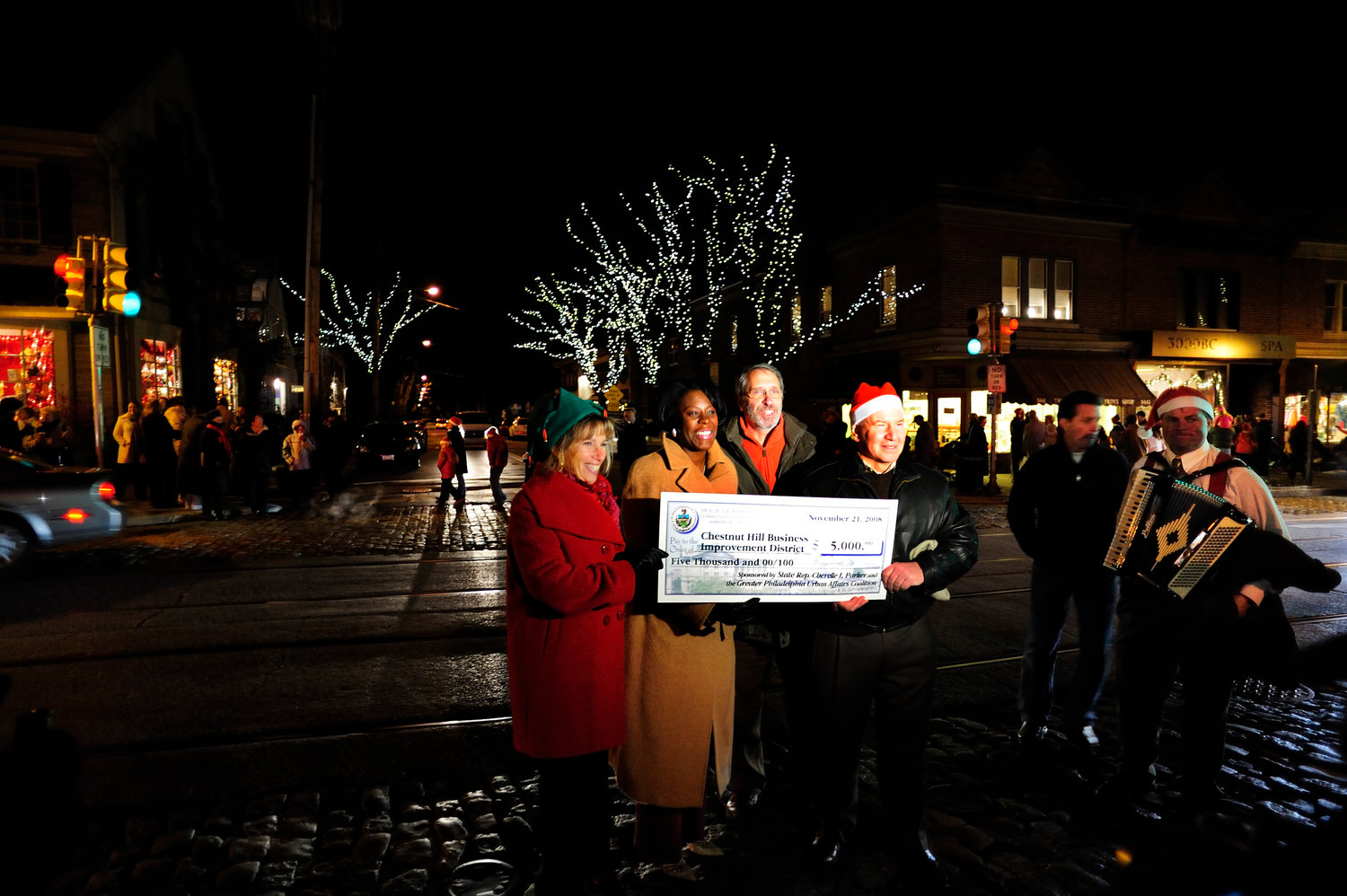 Originally, they were just supposed to be up for just the holidays. In 1998, a group of local businesses decided to put up some holiday lights in a seven-block stretch of Germantown Avenue, centered at the intersection with Highland Avenue.  They went on for Thanksgiving, then went off in February.

They were popular, and each year a few more trees were added - first down to Memorial Park at Mermaid Lane, then up to the Chestnut Hill West train station. By 2008, the Chestnut Hill Business District had lit the trees all along the entire Germantown Avenue commercial corridor.

Everyone enjoyed them as part of Holidays on the Hill, so much that the CHBD started receiving requests to keep them up all year. After much debate and some technical adjustments, the CHBD board finally agreed. In 2018, February came and the lights stayed on.

There are now about 160 trees lit up every night, and all year long.

John Cairns, the independent contractor who maintains the trees and their lights, has been doing it ever since Kate O’Neill, who worked for the Business Association at the time, talked him into taking it on. Cairns, now 77, had retired from PECO and was intrigued by the challenge of setting everything up and then maintaining it. “He’s a really nice man,” said O’Neill, now Director of Operations for the CHBD.  Cairns has assistance from Mike Adams, who words for the CHBD and spends more time up in the trees than Cairns these days.

O’Neill credits Bonnie Greenberg as a driving force behind the Let’s Get Lit! campaign to bring lights to the whole length of the business corridor in 2008. Greenberg, president of the Business Association at the time, in partnership with CHBA President Greg Welsh organized donations with such events as a summertime raffle and the official lighting ceremony. They also secured a $5,000 grant from the Greater Philadelphia Urban Affairs Coalition.

The lights can be costly. Tree pruning might cut a string, or a tree replacement might destroy a whole entangled set, a broken wire gets lodged up in a high branch, or a light bulb gets embedded in some growing bark. Cairns estimates they replace about 40 strands every year.

Then there’s the cost of electricity for lighting nearly 160 trees. One of the reasons the board finally approved the year-round display was a switch from standard bulbs to LED, lowering both the cost to run the lights and the maintenance expenses. The LEDs cost three times what the old strings were, but they last ten years instead of one. “I make a little less money,” said Cairns with a grin, “but I’m happy doing it.”

The four biggest challenges: Trucks knocking branches off; squirrels mistaking the green wires for edible vines; cars parked where they need to position their truck; and Cairns’s knees.

“Gets a little hard out here in the winter,” said Cairns. But “there’s actually more maintenance in the summer, that’s when the squirrels are active, eating through the wires.” And the evidence is clear. In the bed of Cairn’s  truck, there’s a tangle of wires bitten through.

There are also neatly pruned branches. Cairns also runs Buck Nursery, a Christmas tree farm, and if he happens to see a tree needs pruning while he’s up there, it’s part of the service. He talked about a friend of his who had been injured by a falling branch, and he keeps things as tidy as possible.

Cairns and Adams are also responsible for hanging the banners across the avenue. The Holiday on the Hill banners went up last Thursday, the two men checking to make each one centered over Germantown Ave.