Transgendered Hill lawyer has a message for the Pope

Chestnut Hill attorney Julie Chovanes says that “Archbishop Chaput recently threw me out of his church, despite Julie’s “love and belief in the Lord,” because Julie is …

Transgendered Hill lawyer has a message for the Pope 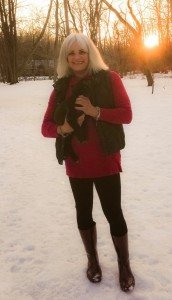 Chestnut Hill attorney Julie Chovanes says that “Archbishop Chaput recently threw me out of his church, despite Julie’s “love and belief in the Lord,” because Julie is transgendered.[/caption]

Julie Chovanes, a transgendered Chestnut Hill attorney, is the founder and executive director of Trans Resource Foundation LLC, a nonprofit in Philadelphia providing legal and social services to the trans community and consulting and professional education services about trans people to the world at large.

Archbishop Chaput recently threw me out of his church. We were scheduled to have a workshop at a local Catholic church on transgender people during the Pope’s visit, about sharing our life and challenges. The Archbishop saw the brochure, saw my face and decided our message, in my case how I have lived my life and met those challenges with love and belief in the Lord, was incompatible with the church’s teachings.

Being transgender isn’t about sex or sin or anything but being a person. It is about having a biological condition that is mocked and cursed by so much of the world. It is about being rejected by family, friends and society:

Trans unemployment is twice the rate of the general population, with rates for people of color up to four times the national unemployment rate.

• 90% of us are harassed, mistreated or discriminated against on the job, or simply have to hide who we are at work.

• 53% of us are harassed or disrespected in places of public accommodation, including hotels, restaurants, buses, airports and government agencies.

• 57% of us experience significant family rejection.

• 41% of us attempt suicide compared to 1.6% of the general population, with rates higher for those who lost a job due to bias (55%), were harassed/bullied in school (51%), had low household income or were the victim of physical assault (61%) or sexual assault (64%).

And African American transgender respondents — in Philadelphia, a truly underprivileged class — fare far worse than all other races in every single category. (2011 National Transgender Discrimination Survey, available at endtransdiscrimination.org/report.html)

Being trans is about having a biological condition, with Dr. Robert Sapolsky, professor of neuroscience at Stanford, summarizing it best after reviewing the over 300 studies about the neurobiology of the trans brain:

The results show that when individuals of Sex A, despite having the chromosomes, gonads and sex hormones of that sex, insist that they're really Sex B; the gender-affected parts of the brain typically more closely resemble what's usually seen with Sex B …

Being trans is about survival in a hostile world. Being trans is about survival in a world that thinks you are the lowest of the low. It’s not about sex and sin, the way the Archbishop would have it. It is sad how everything has turned into sex and sin in the Catholic Church, which is exactly the opposite of its professed intent. Mercy is the Pope's personal motto. and Christ kicked no one out — for anything — from His Church. Being trans is about being a child of God first. Sex is part of trans people, just like every other child of God. But it isn't all of any of the trans people that I know, just like it isn't with any person.

But sex and sin is all we get reduced to in the Archdiocese of Philadelphia, and so it bans us from Christ’s Church. The Archbishop, who controls over $100 million in public and private charitable funding, lifts not a finger to help us. Christ saved His strongest condemnation for those people: “They tie up heavy burdens, hard to bear and lay them on the shoulders of others; but they themselves are unwilling to lift a finger to move them.  They do all their deeds to be seen by others.” (Matt: 23:4-5)

We are people first, children of God and deserving of being welcomed into Her Church with the same dignity and humanity as every other child of God. Pope Francis said that exact thing: “The call of Jesus pushes each of us never to stop at the surface of things, especially when we are dealing with a person. We are called to look beyond, to focus on the heart to see how much generosity everyone is capable of. No one can be excluded from the mercy of God; everyone knows the way to access it, and the Church IS THE HOUSE THAT WELCOMES ALL AND REFUSES NO ONE.” (www.zenit.org/en/articles/pope-francis-no-one-is-excluded-from-the-mercy-of-god; emphasis added)

The Pope is living his words. He invited a trans man to the Vatican, calling the man a “son of God.” The pope has met with prisoners, LGBT people, broke bread with them and brought divine mercy.

Not here, Pope Francis! Not here! None of us asked for this, this biological condition that makes us suffer society’s discrimination and hatred. Your Archbishop lifts not a finger to help us but instead condemns us and has his people condemn us and throw us out of his church.