The most easily preventable crime

One of the things I’m often asked to write about in this space is the frequency of minor property crimes. And the type of crime I’m most often asked to address is thefts from vehicles. The …

The most easily preventable crime 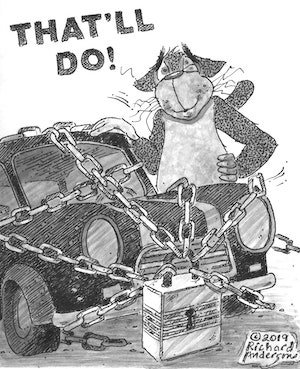 One of the things I’m often asked to write about in this space is the frequency of minor property crimes. And the type of crime I’m most often asked to address is thefts from vehicles. The rationale of those who ask me to address thefts from cars is that perhaps, if reminded in a newspaper column, the citizens of Chestnut Hill might remember to:

1. Remove expensive belongings like laptops and designer handbags stuffed with IDs, bank cards and cash, from their cars at the end of the day, and

2. Lock their doors and windows when their car is unattended.

I think I’m generally an optimist when it comes to human nature, but I’m a healthy skeptic when it comes to people’s struggle against forgetfulness and laziness. I know what it’s like, especially when it comes to forgetting things. I can’t leave my home or office without pausing to perform a quick inventory and realizing I left something behind. Thus there’s almost never a week in which we don’t report a theft from a vehicle parked in Chestnut Hill.

Human nature is at work on both ends of the theft from auto equation in Chestnut Hill. People forget or can’t be bothered to take their MacBook-laden backpacks out of the car at the end of the day. And thieves, who are either desperate to score valuables, find it an easy score or just enjoy the thrill, are in no short supply.

I think often of the most spectacular things the Local has ever listed in one of its weekly crime reports. This was more than 15 years ago, so I can’t recall the exact date. A man broke into the showroom of the Magarity Ford dealership, which was located at 8200 Germantown Ave., hotwired one of the display vehicles in the showroom and used it to ram a vending machine to steal the machine’s change.

That anecdote is both shocking and awesome for the layers of human ingenuity, desperation and disregard for convention. He may have been crazy or a genius. I’m not sure the thief was ever identified or captured, so it’s impossible to know.

Chestnut Hill, Mt. Airy and the near suburbs are nice places to live. Because these neighborhoods are nice places, they’re equally attractive to thieves who are counting on us to let down our guard. No matter where we live, we must remember that there are people out there who can’t wait for you to make a simple mistake on which they can capitalize. It doesn’t take nearly as much effort to find an open car door handle at 3 a.m. as it did to hotwire a showroom car to batter a vending machine.

So consider yourself warned and informed. Lock your car doors and, most importantly, don’t leave anything valuable in them. Let’s try to make the theft from vehicle a rarity in the weekly crime report.