‘The Last Apprentice’ as colorful as his stained glass

Lawrence stands in front of a stained glass window he created for the library in the Lutheran Theological Seminary at 7301 Germantown Ave. in Mt. Airy. by Leslie Feldman and Len Lear “My glass is …

‘The Last Apprentice’ as colorful as his stained glass 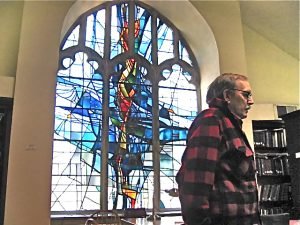 Lawrence stands in front of a stained glass window he created for the library in the Lutheran Theological Seminary at 7301 Germantown Ave. in Mt. Airy.

by Leslie Feldman and Len Lear

“My glass is my message. If there is a God, she will certainly see it.”

According to a publication of the Stained Glass Association of America, “Lawrence’s versatility, perception and finesse in working with light, line, texture, shape, color and movement, as well as his superb interpretation of architectural setting, make his work highly notable and define his unmistakable style.”

In addition to his world-renowned career, Lawrence has done something with stained glass that may be unique in the 1200-year-old history of the art. (The first stained glass windows were said to have been created in the ninth century in Augsburg in Bavaria, southern Germany.) “I am the only person who has ever had a dog interred in the National Cathedral (in Washington, D.C.). After he died, I had him cremated, and I put the ashes into the putty that I used on the stained glass window for ‘The Raising of Lazarus.’ So as long as I live, I will have a friend in the National Cathedral.” (Unless the dog is raised up, like Lazarus.)

Lawrence may joke about his age (“I fell unconscious a while back in McMenamin’s, and my brain has been leaking ever since”), but he is still sharp where it counts. In fact, after a few minutes of conversation with the Mt. Airy master, one realizes he should be writing an autobiography. 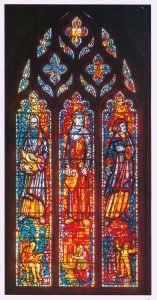 Lawrence created this spectacular “Reformation” window in the south transept of the National Cathedral in Washington, D.C.[/caption]

From displeasing his mother when he told her he wanted to become an artist to his interesting life in New York City in the 1960s and '70s and all of the jobs he held throughout his early career, one finds his life is as colorful as the stained glass he creates. “One of these days, I should sit down and write a book,” he said. “It'll be called ‘The Last Apprentice.'”

Lawrence’s love of art began during high school in Sussex County, NJ. “I was not what you’d call a good student,” he concedes. “The only class I did well in was art.” Because of his lack of interest in academia, Lawrence was allowed to skip last period and go into the town and paint.

Beginning in his early 20s, Lawrence embarked on his apprenticeship to Buenz. His many abstract works were inspired by his years of association with painters, poets, radicals, politicians, professors and other artists in the Greenwich Village section of New York City during the 1950s and ‘60s.

Then, in the ‘60s, Lawrence studied art and design at the Pratt School of Design in Brooklyn. While there, he became heavily influenced by the painters of the French Impressionist Period and The New York School. During that time he also worked at the legendary Rambusch Decorating Company, founded in 1898 in New York by Frode Rambusch, a Danish immigrant. In the 1920s, Rambusch was the decorator for many elaborate movie palaces, including the Roxy Theatre in New York City, which seated 6,214 and opened in March, 1927.

At Rambusch, Lawrence was influenced by stained glass masters Robert Pinart and Robert Sowers and was taught design studio procedures. Lawrence then went on to work in many of the east coast stained glass studios, becoming the premier designer at the Willet Studios in the Juniata Park section of lower Northeast Philly. He came to Philly in 1968 and started his own company in the 1980s.

His work was appreciated, but his attitude and opinionated nature always seemed to get in the way. “I got fired from several places. One boss told me I had ‘no notion of basic civility.' He was probably right, but I did meet a lot of interesting people along the way,” Lawrence recalls.

Lawrence’s signature style blends traditional methods of stained glass window construction with a contemporary design philosophy and modern innovations in materials and production techniques. Essential to all Lawrence windows is his use of bold, clear colors, based on the artist’s lifetime study of color. “I’ve developed my color palette over the years by observing and painting the changing fall leaves. Their colors are so vibrant; they have a rich jewel-like quality that I try to capture in all of my stained glass windows.”

Lawrence’s work can be seen locally at the Lutheran Seminary in Mt. Airy. Along with his works appearing in churches, synagogues, schools and public spaces across the U.S., Lawrence is one of the last living Pennsylvania craftsmen to be commissioned to work in the National Cathedral, for which he has designed five windows.

Among his hundreds of other works were commissions and collaborations for the Washington Temple of the Latter Day Saints, the University of Rochester, Penn State University, The International Baptist Seminary in the Czech Republic, St. Cyril's Catholic Church in Houston, Texas, etc. And for his work at the National Cathedral, Lawrence received a Lifetime Achievement Award from the American Glass Guild. He has also taught art classes at Allens Lane Art Center and at Bucks County Community College.

In 1996 Lawrence received a Lifetime Achievement Award from the Stained Glass Association of America. When not in his studio working on a new project, Lawrence can be seen strolling along the Avenue in Chestnut Hill or taking a long walk with his faithful companion, his dog. (This one is alive.)

More information about Lawrence can be found at  czlsg@earthlink.net or czlawrence.com. Leslie Feldman can be reached at feldmanpr@verizon.net