Audrey Roll is the passionate head children’s librarian at Joseph E. Coleman Regional Library in Germantown.[/caption] by Constance Garcia-Barrio "One must always be careful of books,” a writer … 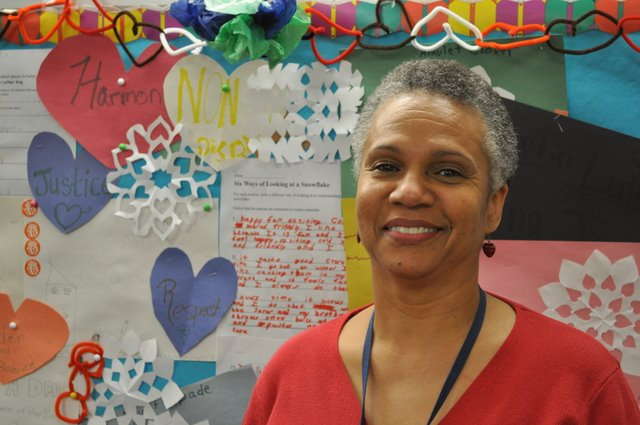 "One must always be careful of books,” a writer once said, “for words hold the power to change our lives.” Audrey Roll, head children’s librarian at Joseph E. Coleman Regional Library, 68 West Chelten Ave. in Germantown, found those words to be blessedly true.

Audrey, 61, who also lives in Germantown, was born in Denver, Colorado, the second of three children. Terror in one case and opportunity in another led her grandparents, originally from Texas, to move west. “My paternal grandfather was a Pullman porter,” she said. “In Denver he earned a living making billboards and signage. My mother’s family left Texas after seeing a black man hanged and burned.”

For Audrey, the promise of the Great Migration seemed to shrivel. Her parents were divorced when she was three years old. “I was raised by my mother in a single-parent home in the slums of Denver,” Audrey said. “My mother earned $5,280 a year as a barmaid working nights.” Audrey’s brother, Noel, three years older than Audrey, kept chaos at bay for her and her sister, Penny, a year younger than Audrey.

Audrey could read by age four, but True Confessions, Detective and Reader’s Digest magazines were the household mainstays, along with a few second-hand books of fairy tales. “The first book that I ever read cover to cover was 'Mandingo,'” Audrey said, of the 1957 novel by Kyle Onstott that portrayed the lives of enslaved blacks in the South, including sexual exploitation, in the 1830s. “I discovered it sandwiched between the mattress and box springs in my mother’s bedroom.” Audrey volunteered to clean her mother’s room every chance she got so that she could read the book.

Audrey could walk to the local library by age 10. She soon read all of Steinbeck, Hemingway and Baldwin. At 14, she became a shelver at the Warren Branch of the Denver Public Library. “I earned $40 a week,” she said. “My mother was happy because I could buy my own clothes.”

When Audrey graduated from the Manual High School in 1971, Boston University, Northwestern University and the University of Pennsylvania all tried to lure her with full, four-year scholarships. Audrey chose Penn because Philadelphia had the country’s third largest black population. Audrey feels that the school's desire for a diverse student body helped. “Being labeled a ‘token Negro’ wasn’t a problem for me. I’d been raised on welfare. I was grateful for the opportunity to attend an Ivy League institution.”

Upon graduating from Penn with a B.A. in liberal arts, Audrey flirted with the possibility of a career in teaching, broadcast journalism, midwifery or other fields, but discerned that public librarianship was her vocation. “Vocation is defined as ‘a divine call to a place of service to others,’” she said. She soon began work on a master’s degree in library and information science at Drexel University and graduated in 1980. 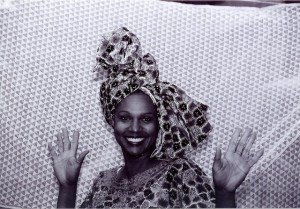 In her role as a storyteller, Audrey might dress up in the garb of the character she is playing to make the story even more compelling.

During her studies at Drexel, Audrey began professional storytelling. Married and the mother of a toddler by then, she found that storytelling helped bring in extra cash. “Later, I began to write poetry, but I became disenchanted with it as spoken-word art,” Audrey said. “Other poets wrote about topics like abuse and racism, and it was uninspiring. I like to be positive about life.” A medical condition also leads her to embrace life’s goodness. Diagnosed with pre-diabetes, she considers it “a gift from God that forces me to seek balance, including curbing stress.”

Despite a somewhat slower pace — Audrey also does voice-overs — she has her hands full as the head of the children’s department of the Joseph E. Coleman Northwest Regional Library. “We’re understaffed in the children’s department,” she said. “We have only one librarian, and we should have at least three. It’s impossible to provide the services we’d like to offer, in addition to helping the children use computers, counseling them, resolving conflicts and bandaging small cuts and scrapes.”

Audrey has plenty of experience in those areas. Married twice though she’s now single, Audrey has two grown sons, Reginald and Nicholas. “People see the library as a sanctuary where their children are safe,” she said. “That point of view has changed and broadened our role as librarians over my 32 years in the field.”

The library has an after-school program that can help ensure children’s success. Literacy Enrichment After-school Program (LEAP) engages young patrons in a literacy-based activity, be it reading, writing, storytelling or creating poems. “We hire high school students from the community,” Audrey said. Shani Taylor, an adult and the after-school leader, guides Elliot Mason and Ucheoma Ibegbulem, both teen assistants this year. All of them live in Germantown. “They come up with entertaining and enjoyable activities,” Audrey said.

The after-school program offers hope that helps offset some disheartening trends. Audrey believes that children’s desire to read books with concentrated text has diminished over the years. Publishers have come out with comic-book style texts that reduce Greek myths and biographies to lots of drawings but few sentences per page. “Kids need more substantial reading than that,” she said. Some of her favorite authors for older children include Christopher Paul Curtis, Eloise Greenfield, Virginia Hamilton, Walter Dean Myers, Laurence Yep and Jane Yolen. “Though I love suggesting my own favorites, I try to determine what the individual child likes,” she said.

“Reading supports writing and clear thinking. It lays the foundation of children’s lives. Come to the library with your children and guide them to good reading. Tell them, ‘I’ll read one chapter, and then you read one.' The library is free. You don’t have to invest money, but it does take time. Children are worth it.”