The knockout artist: Hiller finds thrills as a pro fighter

Ryan Umberger knocked down this opponent, Daryl Fenton, who was so groggy afterwards that the referee ended the fight midway through the first round, awarding Ryan a TKO. (Photo by Kenny Ludwig) by …

The knockout artist: Hiller finds thrills as a pro fighter 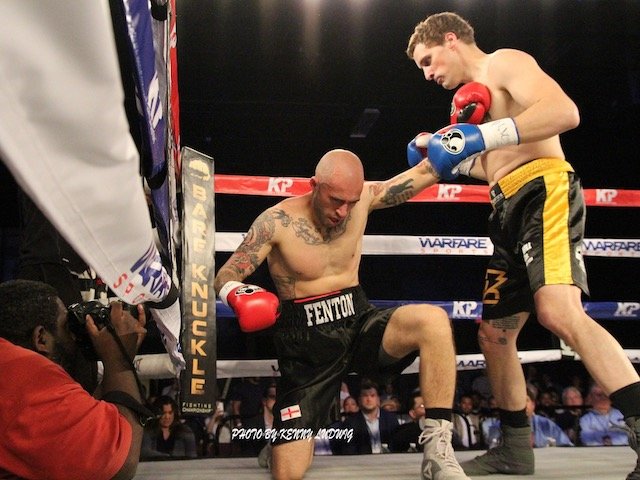 Ryan Umberger knocked down this opponent, Daryl Fenton, who was so groggy afterwards that the referee ended the fight midway through the first round, awarding Ryan a TKO. (Photo by Kenny Ludwig)

By day, Ryan Umberger, who will be 32 on June 10, is a Philadelphia police officer whose wife of three years, Lindsey, is a Chestnut Hill Community Association board member and auditor for Wells Fargo. The couple is expecting their first baby on or about July 1.

By night, Umberger may also very well be the first Chestnut Hill resident to be a professional boxer.

Umberger last fought on March 10 in the 2300 Arena in South Philly, when he scored a TKO after just one minute and 40 seconds of the first round. He hit his opponent, Daryl Fenton, with a right uppercut and then a powerful left to the face (Umberger is left-handed) that left his foe flat on the canvas. Fenton did get up but staggered around, and after Umberger delivered several more blows to his helpless opponent, the referee called off the fight, declaring Umberger the winner.

“It felt like hitting a home run – it was incredible,” Umberger said. “It was also very surprising. I have wobbled guys before but never knocked a guy down until now. It's a feeling I want more of. I'm not a Type-A personality, just a nice guy who likes to fight. In fact, I went to the guy's dressing room after the fight to make sure he was alright, and we had a Guinness beer.”

Umberger, whose trainer, Jose Tilapa, has a gym in Bristol, Bucks County, is sponsored by Chestnut Hill Brewery. His fights are put on by Kings Promotions, and he is part of a stable of fighters known as Pivot Boxing.

In Umberger’s previous fight on March 29 at Sugar House Casino, he won by a TKO after three rounds against a boxer named Brent Oren. More than 300 people were in the audience, and the fight was streamed live, attracting thousands of views.

“I was so nervous I thought I would fall through the ropes,” he said. “My heart was pounding. I thought I'd pass out! We were supposed to fight four rounds, three minutes per round, but each round felt like an hour. My nerves really drained me, although I was in good shape. I wound up with a black eye and bloody nose, and we were both completely exhausted. My aunt was crying the whole time the fight was going on, but when it was over she said, 'I loved it! When's your next fight.'”

Umberger grew up in Levittown, Bucks County, and graduated from Conwell-Egan High School, where he met Lindsey, whose locker was right next to his. He attended Bucks County Community College for one year, but hated it.

“They did not have any subjects I was interested in except for jazz improvisation,” he said. 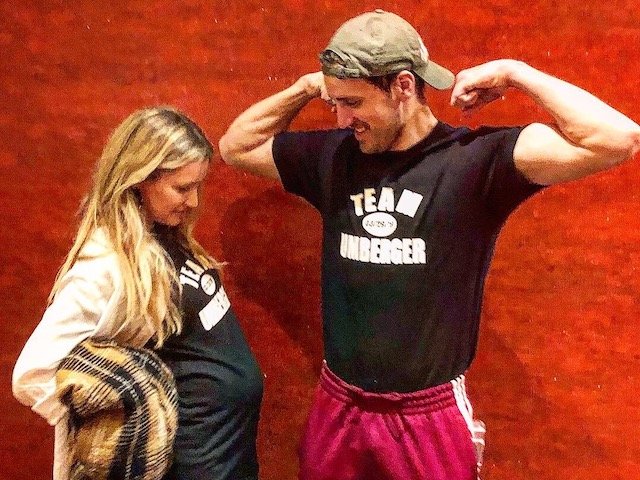 Ryan and his wife, Lindsey, a Chestnut Hill Community Association board member , are expecting their first child on or about July 1.

Umberger plays the guitar and was in two bands that played all over the Delaware Valley. His first band, “Shapes and Stars,” played progressive rock, and the second one, “The Hero Campaign,” played acoustic rock. The latter band, which has two albums available on Spotify and other streaming services, still performs occasionally and played for a wedding recently.

After his short-lived community college experience, Umberger worked at a restaurant, Pat's Colonial Kitchen, in Newtown for six-and-a-half years, cooking and doing every other job but server. When he was a kid, he would watch boxing on HBO with his father, usually rooting for the underdog. At age 19, he began going to a boxing gym four or five days a week in the Oxford Valley Mall.

“That was my way of working out,” he said.

But about one-and-a-half years ago, Umberger said it was time for a change.

“I realized I'm getting older and that it's time to do this in a serious way,” he said. “I had broken my hand and had surgery at Chestnut Hill Hospital. Playing a guitar helped it to heal.”

Meanwhile, after his years of working in a restaurant, Ryan enrolled in the Montgomery County Police Academy, graduated and started working as a Philly cop in 2014. Since he was required to live in Philadelphia, the Umbergers looked at several neighborhoods and picked Chestnut Hill four years ago for their home.

Regarding his police work, which he still does in 12-hour shifts, he investigates shootings, domestic disputes, drug cases, etc.

“I actually have not made an arrest for a while,” he said. “I have never had an incident where I felt in danger. Once a large crowd formed around me and my partner, which was somewhat scary for a while, but then they did disperse.”

Umberger said his eight-months-pregnant wife has some trepidation about his two jobs — boxer and Philly cop. As a result, he is taking a temporary hiatus from the ring.

“But I'm staying in shape, and I'll keep going to the gym,” he said. “I want to make sure everything goes smoothly, and then I'll get right back into the ring. My manager said I have a chance to make some real money.”