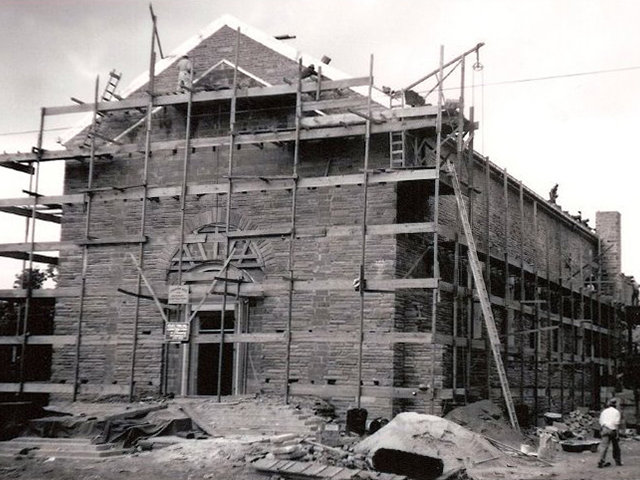 by David Contosta for the Chestnut Hill Conservancy

On Saturday, April 21, the Chestnut Hill Conservancy and Historical Society will give the first of three guided walking tours that highlight the Italian artisans who built Chestnut Hill. This first tour concerns the Germantown Avenue corridor in North Chestnut Hill and will concentrate on several institutional and commercial structures.

The extraordinarily beautiful and well-crafted stone masonry on these buildings was the result of several converging factors. One was the rapid growth and burgeoning wealth of Philadelphia during the first decades of the 20th century.

Prosperous families seeking quiet, outlying areas for building homes were attracted to the heights of Chestnut Hill, with its leafy residential streets and fresh air. Their builders had long used an attractive local stone known as Wissahickon schist for homes as well as churches, schools, and places of business. Into this mix came a group of highly-skilled quarry men and stone masons from northern Italy.

Most of these Italians arrived from a small town called Poffabro, located in the foothills of the Italian Alps in a region known as Friuli-Venezia Guilia, some 60 miles northeast of Venice. Because there was not enough work in the area, its masons had often traveled to Germany, the Netherlands, and even England in search of jobs.

Then with the advent of regular steamship service to the United States, some made their way to America where there was a booming economy and many construction jobs. The first of these migrants to find work in Chestnut Hill sent word of jobs back home, and eventually some 200 families left for Chestnut Hill and the surrounding area, bringing their craftsmanship and traditions of pride and dedication to work.

On this first tour along the Germantown Avenue corridor in North Chestnut Hill, participants will see an example of early institutional construction by Italian artisans in the Free Library, in addition to their work on the last large stone structure on the Hill at the Presbyterian Church. Besides commentary on the stonework itself, there will be some historical consideration of the buildings and their roles in the community. The guides will be Joe Manero and David Contosta. Those opting to take the tour will assemble and park in the lot at the rear of the Chestnut Hill Presbyterian Church, 8855 Germantown Ave.  The tour will run from 1 p.m. to 2 p.m.

The second walking tour will take place on May 5 in Southwest Chestnut Hill, and the third on June 9 in Southeast Chestnut Hill. Also, the Venetian Club at 8030 Germantown Avenue has graciously offered to host an evening lecture at the club at 6 p.m. Wednesday, April 25, featuring an illustrated overview of the work of the Italian artisans who helped build Chestnut Hill. The lecture will be followed by a panel discussion among some of their descendants, with a reception to follow. The cost for each tour is $10 for Conservancy members and $20 for the public. Register online at chconservancy.org/walking-tours or by calling 215-247-9329.