The hottest band in Chestnut Hill area is peerless

The Hot Club of Philadelphia consists of Dan Pearce (from left), Jim Stager, Barry Wahrhaftig, Joseph Arnold and Phyllis Chapell. (Photo by Howard Pitkow) by Len Lear If there is a better band in …

The hottest band in Chestnut Hill area is peerless 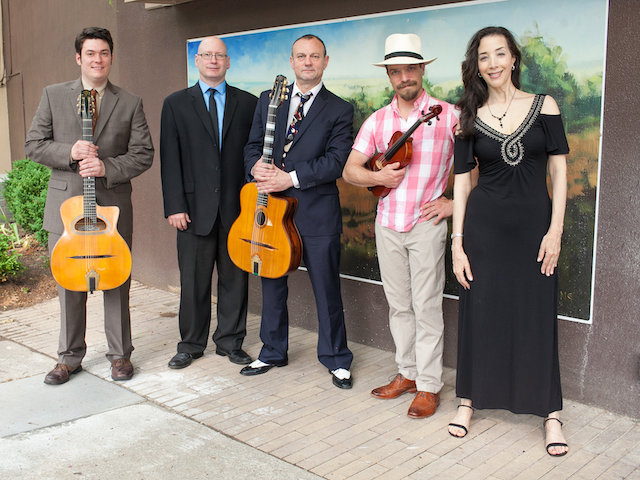 If there is a better band in the area than The Hot Club of Philadelphia, I haven't heard them. If they were back in the 1930s and '40s, where much of their music comes from, they would have been considered a national treasure. Their versions of George Gershwin's “Someone to Watch Over You,” Cole Porter's “You'd be So Nice to Come Home to” or the classic “Cry Me a River,” for example, are peerless.

The stunning musicianship of clarinetist Bob Butryn, violinist Joseph Arnold or lead guitarist Barry Wahrhaftig, for example, to name just a few of the members, never fail to connect viscerally with audiences like those at Paris Bistro Jazz Cafe in Chestnut Hill, where they are considered the unofficial “housed band.” (They will be back at Paris Bistro Jazz Café on Friday and Saturday, Sept 6 and 7.)

The Hot Club of Philadelphia was started in 2001 by Wahrhaftig, 64, of Glenside. They are an acoustic ensemble, dedicated to playing “Gypsy Jazz” but also other types of music. That's the term used to describe the music pioneered by the legendary original “Hot Club of France Quintet,” led by guitarist Django Reinhardt and violinist Stephane Grappelli.

Reinhardt and Grappelli were attempting to do their own version of American “Hot Jazz,” as played by stars like Louis Armstrong and Duke Ellington. They used acoustic guitars, bass and violin, rather than horns and drums. Grappelli and Reinhardt added some French and Gypsy flavor and created a blend of music that was popular and accessible. The HCPhilly mixes the original style of the HCOF, along with their own modern influences.

The band performs as a trio, quartet, quintet, etc. There have been some changes in the lineup through the years. Bassist Jim Stager has been with the group from the beginning. Other bass players include Joshua Machiz and Dylan Taylor. The second guitarist is John/Anthony DiMeo, and violinist Arnold is a key part of the group's recordings and shows.

The band’s shows often feature Meg Elizabeth or Phyllis Chapell, singing in French, Spanish and English, and they have also collaborated with Philly diva Denise King. Wahrhaftig also sings, and he'll add a Sinatra or Nat King Cole standard in addition to songs of the 1920s '30s and '40s. (Gwen Jackson will sing with them on Sept. 6 and Chapell on Sept. 7.)

“My mom's side of the family all played instruments,” said Wahrhaftig, who grew up in Logan, studied classical guitar at Temple University and has been a major player in the jazz, rock and blues scene around Philly for many years. “My mom was always singing old songs like 'I'll Never Smile Again.' My father was deaf, but he read lips and was very funny.”

Wahrhaftig has also hosted and promoted shows, including the Chestnut Hill Community Concert Series, 2016-2017, sponsored by Weavers Way. The series included the Philly Klezmer Heritage band, an all-star 11-piece ensemble. For many years, he has also booked acts at the Venetian Club in Chestnut Hill.

“I'm a good promoter,” Wahrhaftig said. “Many musicians are not. I'm a salesman. I have no problem pushing our CDs. We have sold thousands of them at our shows. I'm not up on Mount Olympus. I am in the real world, where you have to pay bills.”

Every once in a while, though, not many people show up for a concert. Is it hard to perform in that situation?

“I have a friend who played an entire show for one guy in the audience during a big snowstorm in New York,” said Wahrhaftig. “You might have a show booked on a Jewish holiday or during a Phillies playoff game or really bad weather, and no one comes. But we play our hearts out, no matter how many people are in the audience.”

Wahrhaftig, who played at the iconic Palumbo's in South Philly when he was a student, has performed with many legendary old timers such as Al Alberts & the Four Aces and comics such as Cozy Morley. Wahrhaftig also includes humor in his patter between songs. One line that always does well in this area: “You always know when you're in Chestnut Hill because even the homeless guys wear Burberry raincoats.”

What is it like to be self-employed for your entire career?

“Working for yourself is terrific,” replied Wahrhaftig, “and being an independent musician until it's time to pay the bills.”

For more information, visit the band's website or Facebook page. Len Lear can be reached at lenlear@chestnuthilllocal.com