The ‘Father of American Golf’ lived in Chestnut Hill

"The Father of American golf" Alexander Findlay with the best golfer in the world at the time, Harry Vardon, in Florida. (Photo courtesy of Richard Findlay) by R. John Burnes No one can definitively …

The ‘Father of American Golf’ lived in Chestnut Hill 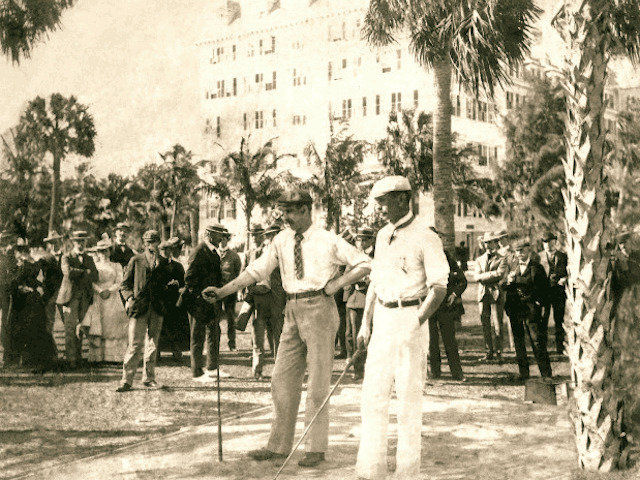 "The Father of American golf" Alexander Findlay with the best golfer in the world at the time, Harry Vardon, in Florida. (Photo courtesy of Richard Findlay)

No one can definitively say what signifies the start of the golf season in Philadelphia, but for some it’s Masters week, and count me among them. I bunker up in the basement with our four-legged children, Hogan and Tilly, for the start of the tournament originally known as the Augusta National Invitation Tournament, and don’t return to civilization until late Sunday once the prized green jacket is awarded to the Masters champion.

The land Augusta National sits on today was the site of the former Fruitland nursery. Its founders, however – Bobby Jones, Clifford Roberts and Alister MacKenzie – believed it would make an ideal location for what has become the Sistine Chapel of American Golf architecture and its premier event, the Masters.

This simple idea and rudimentary beginnings have led to arguably the most watched and talked about event in the game. And when I think about who started this crazed game in America, and its humble beginnings, I think of Alexander Findlay.

“He clearly belongs as one of the recognized golf pioneers in America,” said world-renowned golf historian Sidney Matthew. “He was a prolific builder of golf courses, an excellent player and even an accomplished club maker. He did everything in the early days of the game in this country.”

If you attempted to write and submit a movie script on Findlay, you wouldn’t get away with it. It’s too hard to believe that a young boy, born at sea between Scotland and England in 1866 to an English officer and mother, would become what some historians credit to be the father of American golf.

As a child, Findlay would be given golf clubs by his mother in Scotland and go on to break nearly every course record in and around his hometown, all while teaching his brothers and friends the game with which he instantly fell in love. He vowed to keep his promise to his mother to never drink or smoke, and when he she passed away early in his life, the young Findlay looked west for new land to traverse. 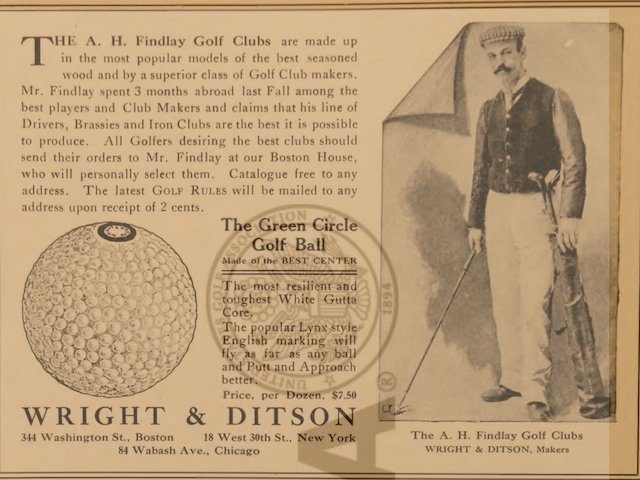 Alexander Findlay was a leader in designing golf equipment. (Photo courtesy of the U.S. Golf Association)

Around 1887, a neighborhood friend would invite him over to America, bragging in letters about the beauty, terrain and opportunity the Wild West promised. Findlay arrived in New York City, and when he asked where the nearest golf course was, the citizens of the Big Apple laughed. He headed West to the great plains of Nebraska to meet up with his friend as a rancher, and once again realized there weren’t any golf courses. So, he built one.

The defenders of the Findlay legacy believe, that this month, 132 years ago, Alexander and his pal Edward Millar built a six-hole layout in what is now Fullerton, Nebraska. And therefore, it would pioneer the game in America as the first golf course ever in the United States.

“When Alex came to America, little to no one was playing golf. When he died, over five million people were playing. So I think he did a pretty good job,” said his grandson, Richard Findlay, in a recent interview.

A few years later, word spread of this game of chasing a small white ball around a field to a railroad baron by the name of Henry Flagler, who would hire Findlay to build golf courses near his rail line. Flagler needed a draw for folks up north to visit Florida and this new game of golf proved to be the right antidote.

Findlay would build courses in Florida – including its oldest, the Breakers at Palm Beach – as far west as Montana, down to Texas, throughout the mid-Atlantic region and up to New England. He would eventually settle in the Chestnut Hill area and build Llanerch Country Club in Havertown.

Wright and Ditson, the largest sporting goods company in the country, would hire Findlay to not only build courses, but craft his signature golf clubs as well. He would travel around the country on commercial tours, exhibiting the products to folks intrigued with the game and often setting new course records along the way. He enlisted his friend from the old country, Harry Vardon, who was the best player in the world, and they would have exhibition matches to stir further interest.

“Alex was literally known throughout the world,” Richard Findlay said. “He taught or played with every president from Grover Cleveland through Franklin Delano Roosevelt. He once had a meeting with the Pope trying to persuade him to take up the game, to which His Holiness quipped, ‘I don’t want Catholics playing on Sundays.’” 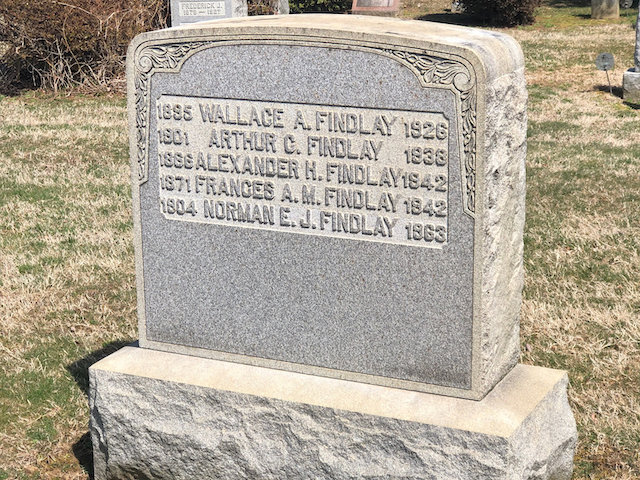 Findlay would work in the last chapter of his career, leading the sporting goods division of John Wanamakers department stores in Philadelphia. He died in 1942. The family plot is in Ivy Hill Cemetery on East Mt. Airy Avenue. He built more than 100 courses across America, and his last and perhaps most important, in Fairmount Park.

Walnut Lane Golf course in Roxborough, just over Walnut Lane Bridge from West Mt. Airy, is a tough and tight municipal course open to the public.

Home of The First Tee program administered by the World Golf Foundation, Walnut Lane provides a platform for the youth development organization, introducing the game of golf and its inherent values to kids and teens. Through after-school and in-school programs, it helps shape the lives of young people from all walks of life by reinforcing values like integrity, respect and perseverance through the game of golf.

I’m not sure if Findlay is in fact the father of American Golf, but I am sure that he would be proud of his legacy.

R. John Burnes is the President of Dormie Partners, a consulting group specializing in digital transformation, organizational development and legislative services. He can be reached at rjburnes@yahoo.com