As the Local reported in previous issues, Woodmere Art Museum is presently working to secure funding to purchase the property at 9001 Germantown Ave. from the Sisters of St. Joseph. 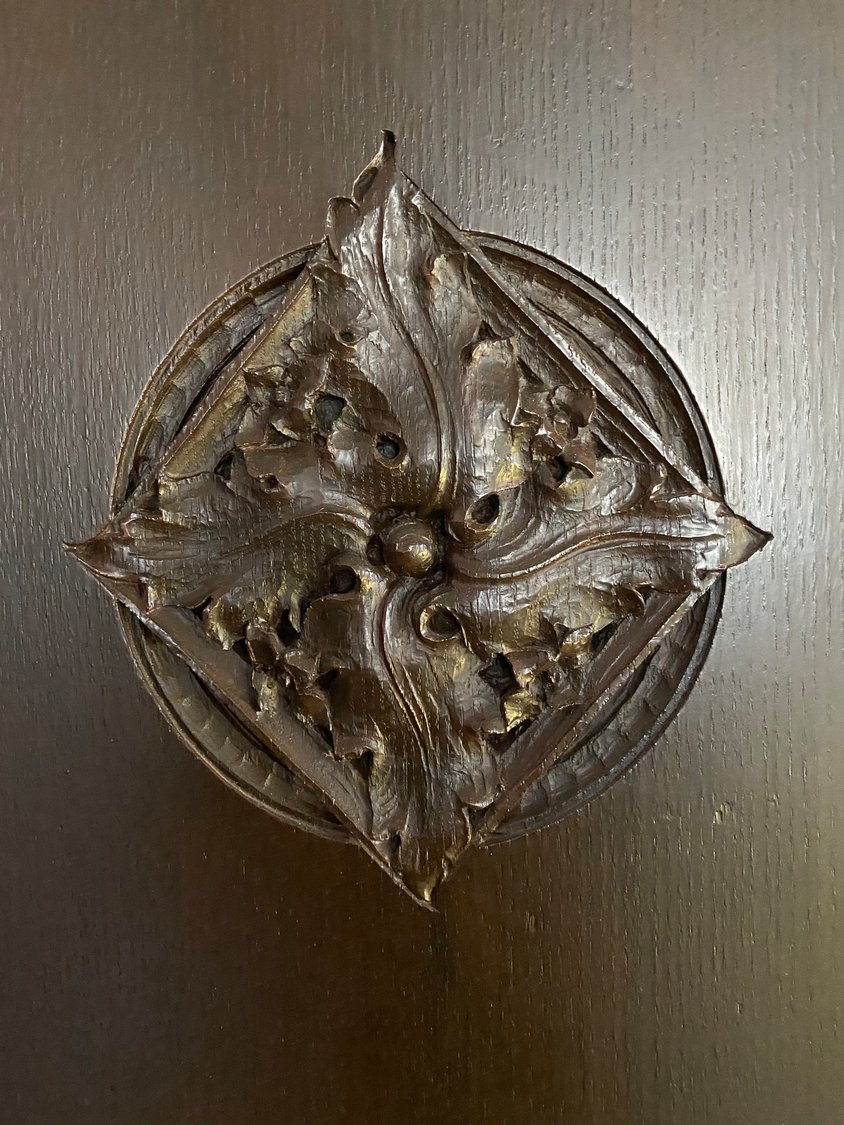 Hand-carved woodwork and details in the billiard room, dining room, and other spaces of St. Michael's Hall are identified as the work of Edward Maene (1852-1931), a recognized master of the American Renaissance who frequently worked for Cope and Stewardson, the architectural firm that renovated the mansion at the turn of the twentieth century. Much of Maenes' work, in the Widener mansion and elsewhere in Philadelphia, has been lost to the wrecking ball. Characterized by dynamic sensuality in the rendering of organic form and an honest expression of tool markings, Maene's artistry represents a great achievement in the decorative arts of Philadelphia. It greatly elevates the historic significance of St. Michael's Hall. To learn more: see wikipedia.org/wiki/Edward_Maene
Posted Wednesday, April 21, 2021 10:30 am
By William Valerio and Lori Salganicoff

With regard to the effort to save St. Michael’s Hall, Bill Valerio, the Patricia Van Burgh Allison Director of Woodmere, recorded a conversation with Lori Salganicoff, the Executive Director of the Chestnut Hill Conservancy. As the Local reported in previous issues, the museum is presently working to secure funding to purchase the property at 9001 Germantown Ave. from the Sisters of St. Joseph, who have used the property as a residence. The Sisters have given Woodmere until April 26 to make an offer. – Ed.

Bill:  Lori, it's terrific to partner with you on the effort to save Saint Michael’s Hall. Last week I spoke with Ruffian Tittmann, who runs the Friends of the Wissahickon, about the environmental considerations associated with the development of the site. I know there are “green” consideration associated with historic preservation as well.  Can you describe this for us?

Lori: Thanks Bill, the Chestnut Hill Conservancy is delighted to be partnering with Woodmere and the Friends of the Wissahickon in the effort to save Saint Michael’s Hall . And yes, the Conservancy is focused on both historic and land preservation.

To begin with, demolishing a good, structurally sound building like Saint Michael’s Hall represents an enormous waste of energy. Landfill debris from demolitions accounts for over a quarter of the non-industrial waste across the United States. Then, even if replaced with the greenest of new buildings, adaptive reuse saves the energy that would need to be expended in replacing a building’s fixtures and features. Finally, there are energy-saving advantages associated with the elements of great old buildings like Saint Michaels. For example, stone walls help to control temperatures and result in substantially lower cooling needs. High ceilings and large windows allow for natural light. The architects and builders of our past knew what they were doing!

Bill:  At Woodmere, we are aware that our historic building, with our monumental sculpture and our straw maze, contributes to "sense of place" that defines our community. The tower, with its mansard “hat” has a quirky personality. How do you see this factor playing out in Northwest Philly in recent years?

Lori: Preservation of the architecture of St. Michael’s is a priority for the Conservancy, and we don’t want to see a big cluster of contemporary homes on the site. To this day, St. Michael’s and the green space around it serves as a magnet, attracting people to the community and creating the sense of a special, unique place. Unfortunately, in recent years we have witnessed an alarming intensification of development pressure, resulting in the loss of character and aesthetic appeal. This reduces property values and detracts from the desirability of the neighborhood. Overdevelopment is bad! Woodmere, a historic home that was transformed into a museum in the 1890s, can be thought of as an early example of adaptive reuse and sustainable preservation that we hope to see repeated.

Bill: A great work of architecture is also part of history. It can tell important stories.  How is this relevant with Saint Michael’s Hall?

Lori: Historic buildings represent a window into our past. The beautiful stonework of St. Michael’s was probably cut by Italian immigrants who were high-skill artisans, not to mention those who made the ornate ironwork and hand-carved woodwork. I’m aware, Bill, that you have identified the hands of members of the Rose Valley Arts and Crafts movement in some of the ornamentation, for example in the multi-figure capitals of the space that was once the billiard room.

More generally, Northwest Philadelphia was a region where many of the leaders of 19th-century industrial Philadelphia built their estates, and these structures and their gardens represent the aspirations of an empowered segment of the country at a specific era of history, especially in the post-Civil War era and around the time of the Centennial of 1876. At that time, Philadelphia was leading the country with its industrial growth.

Here are a few of the stories this building has to tell:

The Hall was built in 1857 by William Henry Trotter, a partner in what is now the oldest continuously operated metals company in the US (Nathan Trotter & Co).  Trotter lived in St Michael’s for eleven years, during which time he was one of five men who applied for the charter granted to incorporate Chestnut Hill Academy.

Henry Latimer Norris and his family lived here for 16 years, having helped his father become the first American exporter of locomotives (and at one point the largest locomotive maker in the US). The Norris’ sold their factory to Baldwin, allowing Henry to retire at the age of thirty-five.

Alfred Craven Harrison purchased the estate from Norris in 1884. He owned the Franklin Sugar Refining Company and was one of the wealthiest men in Philadelphia during the thirty years he lived at Saint Michael’s. It’s important to acknowledge that across the globe, the sugar industry was brutal in terms of exploitation, and the Harrisons occupied the top of that food chain: a complicated, difficult history that continues to shape the world today. Harrison was part of his times, and he and his brothers were responsible for creating a lasting legacy of great architecture across Greater Philadelphia.

The Harrisons added to Saint Michael’s working with the noted architectural firm Cope and Stewardson. Beautifully carved wooden Hs on escutcheons adorn the home in several locations, reflecting the Harrisons’ desire to plant themselves in history like a great European dynasty. Harrison was on the board of the Pennsylvania Academy of the Fine Arts, and other members of the Harrison family were important art collectors. As you’ve pointed out, I’m sure the Harrisons were pleased when Charles Knox Smith bought Woodmere and began transforming it into a museum.

The Sister of Saint Joseph purchased the home in 1927 and named it St. Michael’s Hall.

Having established several nearby institutions–including the nearby Mount St. Joseph Convent, the Mount St. Joseph Academy, St. Joseph’s Seminary for Little Boys, Norwood Academy for Boys, and Fontbonne Academy for Girls, and Chestnut Hill College–the Sisters used the structure as a school building, as a dormitory for students, and eventually, and up until recently as a nunnery.  They changed the spirit of the place. It’s beautiful to see the receptacle for Holy Water at the entrance to the Harrison’s dining room because the Sisters converted it into their chapel. Now it’s time to see Saint Michael’s become a museum. What will you name it?

Bill:  Thank you, Lori, for that soft pitch!  Woodmere is seeking a donor who might like to put his or her name on the building with a leading gift. The dining room that became a chapel has the potential to become one of the most beautiful lecture halls in the region. Thank you for describing this fascinating history, and I look forward to working together on this project and many others.