'The American Rodin' in our backyard

Frudakis’ highly acclaimed “Freedom, 2001” statue, which includes a cutout for a person to stand in, is 20 feet long and 8 feet high and is located at 16th & Vine Streets.[/caption] by Len …

'The American Rodin' in our backyard 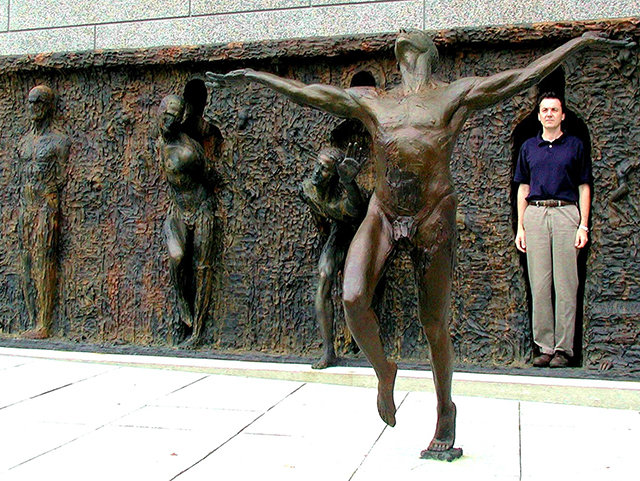 Frudakis’ highly acclaimed “Freedom, 2001” statue, which includes a cutout for a person to stand in, is 20 feet long and 8 feet high and is located at 16th & Vine Streets.[/caption]

Donatello, Bernini, Michelangelo, Rodin, Brancusi, Ghiberti, Maya Lin, Louise Nevelson, Bartholdi. I don't think anyone would quarrel that this is a list of some of the greatest sculptors in art history. I would not be at all surprised if the name Zenos Frudakis is some day added to the list.

When Zenos, 64, who has lived in Glenside for 29 years, won the Hakone Award at the Japan's Third Rodin Grand Prize Invitational International Exhibition at Hakone Open Air Museum in 1990, the Japanese woman known as "Asia's Katie Couric" called him "The American Rodin" on their version of “60 Minutes.”

“We have some of Rodin's students' tools in our studio,” Frudakis told us recently. “Artists hand them down to students they think will fulfill the promise of their clay and sculpture tools. We have clay from D.C. French, St. Gaudens, James Earle and Laura Fraser, among other American sculptors. D.C. French sculpted the Lincoln Memorial. Rizzo's sculpture and the Freedom sculpture (both created by Frudakis) were both done with his clay.”

Zenos grew up in Gary, Indiana, where he worked in a steel mill, but he came to Philly in 1972 to study at the University of Pennsylvania, where he earned bachelor’s and master’s degrees in Fine Art. He also studied under his brother, Evangelos, an acclaimed sculptor. Their late father, Vasilis, was a highly respected poet and musician who had come to the U.S. as a boy from Greece.

The oldest of five children growing up in Greek culture, Zenos was drawn to Greek sculpture, which influenced his aesthetic vision; additional inspiration came from the legendary Michelangelo, Bernini, Carpeaux and Rodin.

“I always wanted to be an artist,” said Zenos. “From my earliest memories, I did drawings. I made sense of the world visually.”

And if you have lived in the Philadelphia area for at least a year or two, you have undoubtedly seen at least one of Frudakis' major outdoor sculptures: the 10-foot-tall bronze statue of Frank Rizzo in front of the Municipal Services Building across the street from City Hall; “Freedom,” a 20-foot-long, 8-foot-high world-renowned work in front of the former GlaxoSmithKline headquarters at 16th and Pine Streets; the 16-foot-tall bronze “Paradigm Shift” at the GMAC Corporate center in Fort Washington; the gigantic Steve Carlton delivering a pitch outside Citizens Bank Park, etc.

Outside of our area, Frudakis has sculpted works at Brookgreen Gardens in South Carolina, the Lotos Club of New York City, the Utsukushi ga-hara Open Air Museum in Japan, the National Academy of Design and the U.S. Embassy in Pretoria, South Africa, Capitol Plaza in Indianapolis, et al. Frudakis was the youngest sculptor ever nominated for membership in the prestigious National Sculpture Society.

“Usually one figure sculpture can take a year or more,” said Frudakis. “I am always working on several projects at a time. I bring a lifetime to bear on each piece, no matter how long it takes to create.”

Like many sculptors, Frudakis was a painter before committing to sculpture as a career. His first painting commission was for the law firm Dilworth Paxson Kalish. He did several portrait bust commissions, “but my first significant commission was for Stockton Strawbridge, who asked me to create an elephant fountain for his Burlington Mall store, a life-sized elephant with a boy on her back.

“The model for the elephant was Petals, from the Philadelphia Zoo. Mr. Strawbridge and I had no contract, only a handshake. I've heard that the fountain collected thousands of dollars each year for a charity for handicapped children.”

Obviously these outdoor sculptures are extremely difficult, capturing every detail of the face and body and emotional essense of the subject, and the bronze is very expensive. Frudakis did not mind revealing that he has been paid $1.1 million for each of several commissions.

Of his many works, which are his favorites and why? “'Knowledge is Power' at Rowan University because it is an expression of my love for learning ... And 'Freedom,' at 16th and Vine Streets because I created the sculpture just the way I wanted to make it. It was my idea, and it was drawn from poetry and philosophy of my choosing. The client, Liberty Property Trust, allowed me to express myself fully.”

“Freedom,” created in 2001, represents liberation from political repression, fear, personal demons, addiction, anything that imprisons the body and/or spirit. There is even a standing-room space that a viewer can walk into and out of to get the feeling of a burden being lifted from one's psyche.

Of Zenos' many commissions, both physically and emotionally onerous, which were the most difficult? “The time I created 17 sculptures in one year, including the four 10-foot-high Phillies sculptures, that were physically difficult. My most difficult philosophical effort was creating the 'Freedom' sculpture.”

Why is Zenos not as famous as he should be, based solely on his talent? “The most talented people aren't necessarily the most famous. Some are famous for reasons other than their ability.”

In his spare time, Zenos likes to read, play guitar and walk along Forbidden Drive. And he has a cat, Bing Clawsby, who is very entertaining.

If he could meet and spend time with anyone on earth, who would it be? “No one person springs to mind above others that I would want to meet. I enjoy meeting interesting people who achieve excellence in their own field.”