Marjorie Jones teaches a weekly class on women in American history to all-male students at Graterford Prison. by Marcia Z. Siegal “It's been an amazing experience, finding my teaching voice inside … 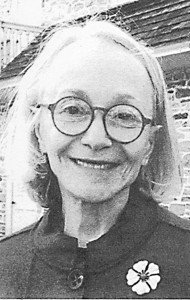 “It's been an amazing experience, finding my teaching voice inside a maximum-security prison,” says Marjorie Jones, 74. She teaches a weekly “Women in America History” class to 20 convicted felons. Her class takes place on Tuesdays at Pennsylvania State Correctional Institution at Graterford, commonly referred to as Graterford Prison, a formidable concrete building set in the midst of a stretch of farmland.

Nothing about the experience is ordinary, including getting into the classroom. Once inside the prison, Jones waits for the first set of sliding steel doors to open. One or more guards accompany her everywhere she goes.

She shows her driver's license; her right hand is stamped, and she is given a plastic bracelet and visitor's badge to wear. She walks through a metal detector while her books, papers and watch are scanned separately.

Another metal door slides open, and she enters a waiting area. Soon after, guards escort her down a long hallway to the school and then to her classroom. Her students are waiting, each wearing a dark brown jumpsuit with DOC (Department of Corrections) in large letters stamped on the back.

“Good afternoon, gentlemen,” she says as she begins the class.

She began teaching this college history course at the prison two and a half years ago as an adjunct professor for the college degree program sponsored there by Villanova University. “The students are so smart, so eager to learn. I look forward to class,” she says, adding, “Often it doesn't go where I think it will go.”

Located in a remote area of Skippack Township, Montgomery County, surrounded by high walls topped with barbed wire, Graterford Prison houses 4,000 male inmates, considered to be among the most dangerous and violent in the state prison system. The college program enrolls a maximum of 65 students at any one time.

Jones connected with Villanova's program at Graterford shortly after moving to Philadelphia. She'd previously taught in a similar program, sponsored by Mercy College at the Sing Sing Correctional Facility, a men's maximum security state prison in Ossining, N.Y. Students in the Mercy College and Villanova University prison programs follow the same rigorous curriculum used at the campus sites. “Nothing is changed or 'dumbed down,'” Jones says.

The author of a biography on British scholar and historian Frances Yates and an upcoming biography of Philadelphia Quaker Mary Vaux Walcott, known as the “Audubon of Botany,” Jones is passionate about women's history. Her prison course highlights women's rights issues and the lives of both famous and ordinary women who helped to shape the American story, from the Revolutionary War era to modern times.

A course about women might seem an odd fit for the tough guys Jones teaches. Not so, she points out, calling her students “thoughtful and avid, engaged and caring.” Many are quite interested in women's issues, having been raised by women and in fatherless households, she says. One of her students told her, “I've never met a feminist before,” expressing grudging appreciation of his new experience.

“The class has to be some relief from the monotony of prison life,” Jones says. “Many of these men were never told they were smart. I think they are so turned on by the life of the mind and being awakened intellectually.”

Having her students contemplate history from a feminist perspective is a natural for Jones, who is accustomed to considering different sides of an issue. Prior to obtaining her graduate degree in history, she spent 25 years as an attorney/banker. “My first day of law school, a professor told us that the answer to every question is 'it depends,'” she says.

“It depends on who is doing the telling, what their experience is, their background and so many other factors. I tell my students that obviously things will look different to me than they will to each of you. The important thing is to come here and learn how to think critically, or you're wasting your time.”

Jones has taught in a more traditional classroom setting at Mercy College in Dobbs Ferry, N.Y. However, she says it is teaching at maximum security prisons that has transformed her life and spurred her to be an advocate for prison education and reform.

One of her most profound experiences occurs when she attends graduation ceremonies for prisoners who are receiving their college degrees. Many have spent 10 years or more pursuing this goal. For graduation, they are dressed impeccably in graduation robes over their prison garb. Their family members sit proudly in the audience. “I have never been to a prison graduation without having wept,” Jones says.

The college program can also transform the lives of men convicted of serious crimes, she says. The 2011 documentary “University of Sing Sing,” by Timothy Skousen, broadcast in 2014 on HBO, showcased the college program at that maximum security prison. Of the 90 program graduates released from Sing Sing, only one was re-imprisoned.

One man in Jones' class will be 75 when he is eligible for release from Graterford. He tells her that she inspired him about the possibilities ahead. “God bless you, Doc,” he says at the end of each class. “Thank you for coming.”

Information about Jones' books is available on her website www.majorriegjones.com. More information about “The University of Sing Sing” documentary at www.hbo.com/documentaries/the-university-of-sing-sing#/. Reprinted, with permission, from Milestones, a publication of Philadelphia Corporation for Aging. Contact Marcia Z. Siegal at msiegal@pcaphl.org