Tahir is music to the ears of pedestrians near Kilian's 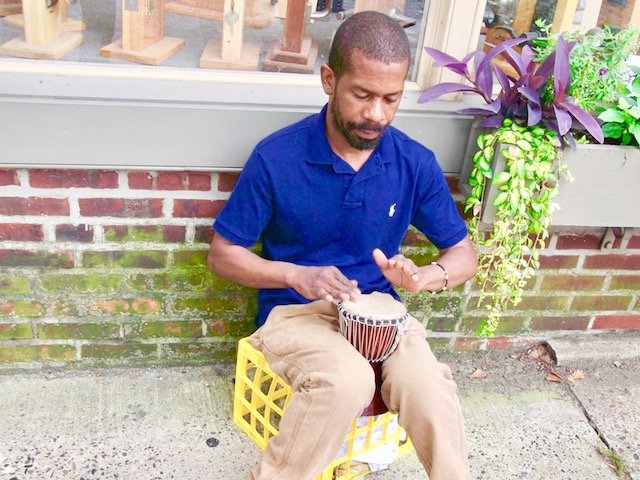 Tahir Jamal, a street musician from Mt. Airy, can usually be found playing the bongos outside Kilian's Hardware Store a few times a week “in the rain and sleet and snow, like the mailman.” (Photo by Len Lear)[/caption]

If you have recently walked along the west side of the 8400 block of Germantown Avenue near Kilian's century-old hardware store, you may have seen a smiling gentleman playing a small drum as pedestrians stroll by, some seemingly oblivious to the music but some appreciating it and dropping coins or a bill into a nearby tin can.

Tahir Jamal, 41, the street musician who has lived in Mt. Airy for most of his life, was riding past Kilian's on a bus early this year when he noticed an elderly lady playing on a portable keyboard. Inspired by the keyboard lady, Tahir began showing up himself regularly but with a drum, not a keyboard (although the keyboard is actually Tahir's favorite instrument to play).

“I’m out there in the rain and sleet and snow, like the mailman,” said Tahir. “I've played with my hands freezing and toes numb. Tips were not necessarily any better … It’s not a real job, but it prepares you for one. You learn how to be on time and push through. It's very satisfying, gives me peace of mind and a good attitude. It teaches you how to be a host — to smile, greet people, learn how to talk to people. It’s a lot more than just music. I love it.” (Author's note: Tahir will smile and greet people, even if they don't put anything in the cup. That is what prompted me to do this story in the first place.)

“Once I started, I have not stopped. I should have done this years ago. Making music is number one for me. You never stop learning. Some people say quit and get a day job, but I love making music. It's not all about money.

“One guy who tips me gave me a drum. The best gift. That has helped me get $20 a day. Everywhere I go, people are cool. You’d be amazed how social people can be. They have helped me become more social, too. I might get an orange, a banana, a cup of coffee or maybe just some good conversation.”

Tahir did sell Oriental rugs in Plymouth Meeting Mall in 1997 and 1998; he was a dishwasher at Fiesta Pizza and other pizza places in the area. He was also a home health aide for five years, “but then I started working on my music full-time. But I’m always looking for a job. The older I get, the more I understand I need to work.”

Tahir was born and raised in Mt. Airy, and he still lives there with his dad, Kahn, a vibraphonist and former full-time musician who “still plays whenever he gets a chance,” and a 48-year-old brother, also named Kahn. Tahir went to Houston Elementary and Germantown High School and later earned his GED.

He started playing the drums at age 5 and took classes at Settlement Music School in Germantown. He learned to play the piano from other musicians, but that was difficult because there was no piano in his house. He played with several bands and combos in local clubs. “I learned a lot from everyone I played with. The best advice I ever got was: 'Keep doing your music, and never stop.'”

Tahir learned how to make his own studio sessions and record his own music, mostly hip hop, jazz and rhythm & blues. “I love all kinds of music, although I have to force myself to listen to some things like classical and other cultures of music.”

The street musician says he did some work for Philly International Records and The Studio at 7th and Callowhill Streets — keyboards and drums and programming electronic music. “But I wouldn’t play music on the street when I was younger. Too much pride, I guess. But it has actually opened up more doors by meeting lots of people.”

The street outside Kilian's is not Tahir's only concert venue. He also plays drums periodically at Germantown and Mt. Airy Avenues and possibly keyboards as well if it’s not raining. He also plays from time to time at 15th and Sansom Streets and a location on Chestnut Street. He does not want to say exactly where.

One might think a center city location would be more lucrative because there are so many more people walking by, but “it is actually harder down there because there is so much competition. A store owner also has the right to kick any musician outside off the street, but no one has ever kicked me off. I have definitely learned that people love music more than you might think.”

When Tahir was young, he would often go to the Zatzman Music Store in Chestnut Hill “to play the guitar. I’d break a string, but Mr. Zatzman would always let me back in. A very nice guy.”

On a typical week, Tahir will play for three days in Chestnut Hill, 10 a.m. to 5 or 6 p.m. What does he do for lunch? “Play drums ... You gotta earn your keep. If I’m not on the street, I’m kicking back in my mini-studio. I’m happy and satisfied, not bitter about anything. You’re only bitter if you make yourself bitter. You gotta work for what you want. Every day is not Christmas. You have to provide for yourself.”