Syrian family gets help to resettle in Philadelphia

Wissam and Dima at their new Philadelphia home. by Christina Grierson The long-running Syrian Civil War has brought much havoc to Syria and has caused many of its residents to seek refuge in a number …

Syrian family gets help to resettle in Philadelphia 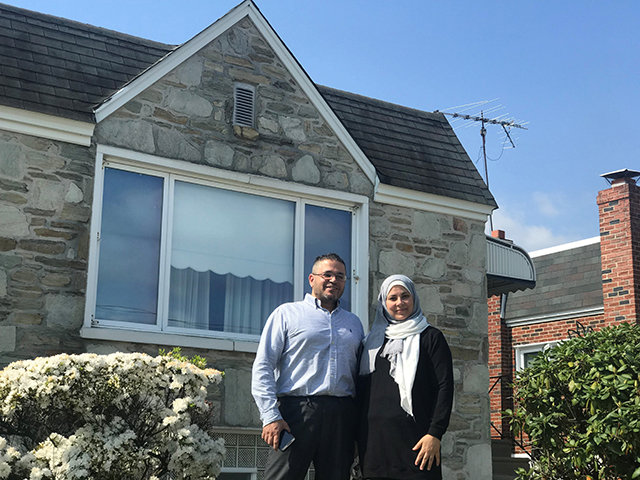 Wissam and Dima at their new Philadelphia home.

The long-running Syrian Civil War has brought much havoc to Syria and has caused many of its residents to seek refuge in a number of outside countries like Turkey, Sweden, Canada and the United States. Wissam and Dima, a Syrian couple settled into the Philadelphia area with their three children, were among the many refugees seeking a safe haven amidst the war.

Prior to coming to the United States, the family spent three years in a refugee camp in Jordan, a neighboring country of Syria. Following a year and a half of mandated interviews, criminal record background checks and health checks, the couple and their three children, ages 11, 15, and 17, were selected by the United Nations High Commissioner for Refugees (UNHCR) to be a part of the resettlement program in the United States under the Ministry of Homeland Security’s supervision. Through the UNHCR, the family was linked with HIAS, the Hebrew Immigrant Aid Society.

HIAS is a nonprofit organization that assists immigrants, refugees and asylum seekers from all over the world with different support services involving citizenship, settlement and integration into the United States. HIAS covered the expense for each of the family member’s plane tickets from Jordan to America by way of a loan.

The family arrived at John F. Kennedy Airport in Queens, New York on Feb. 2, 2016. Upon their arrival, the family was greeted by the HIAS organization where they were assisted with transportation, accommodations and all of their necessary paperwork.

They were preparing for a fresh start in a completely new environment.

“When we came here, we didn’t know anyone,” Wissam said.

However, Wissam and Dima would soon meet David Broida, who would soon become a pivotal figure in their new lives in America.

David Broida is a frequent donor to the HIAS organization. Three years ago, instead of throwing his annual Hanukkah party, where glorious gifts are exchanged amongst the children, he suggested that all of the gifts be donated to HIAS.

“No gifts — they have enough already. Everybody get a gift and bring it down to HIAS and give it to refugees,” Broida said.

Broida was introduced to Wissam and Dima in the HIAS offices soon after their move to Philadelphia. After getting to know each other, Broida gave the couple his contact card and assured them that he would be one call away if they needed him.

“If you need anything, give me a holler and I’ll help you,” he told them.

Since meeting Wissam and Dima, Broida has more than kept his word to their family, gifting them cell phones, laptops for school, bicycles, instruments, etc.

But, the help didn’t stop there. Wissam and Dima were settled into a home in the Northeast area, but were not fully comfortable. They wanted a home that would suit both them and their three children. To start the process of finding a new home, the couple reached out to Broida for assistance, and as promised, Broida did just that. Through Broida, Wissam and Dima were connected to Wendy Schwartz, an Elfant Wissahickon Realtor.

Outside of being a Realtor, Wendy Schwartz has a background in social work and humanitarian work. Working by the motto of, “everybody deserves a home,” Schwartz has always been passionate about doing whatever she can to aid those less fortunate. She even donates a percentage of the proceeds from all of her transactions to children in Guatemala to pay for their education. When presented with the opportunity to help Wissam and Dima find a home, it became more than just another sale.

“As a social worker and someone who is involved in community action and working international with people, it was a really good fit – I feel like they’re like family to me now,” Schwartz said.

Schwartz was able to finalize the entire process of finding and settling on a new home for the family in just three weeks. In fact, the home that the family ended up moving into was only on the market for two days before it was officially sold to Wissam and Dima.

“I have a good Realtor,” Wissam said.

The couple was also aided financially by the Women’s Opportunities Resource Center or WORC, to purchase their home. The organization assists people in becoming self-sufficient financially with programs in entrepreneurship, micro loans and asset building. There, Wissam took part in one of the many training programs they offer.

WORC also offers federal grants to assist refugees in buying a car or a home. Wissam applied for one of the grants, and the organization took note of the money he and Dima had been saving up during their time in the states and were pleased to see that he had secured a job at the Children’s Hospital of Philadelphia. WORC matched the closing costs of their home, granting the couple a total of $8,000 towards their home.

The family has been in their new home for a month and a half, and to make their adjustment easier, were graciously given furniture from a number of Schwartz’ other clients.

When the children arrived to the U.S., they spoke little to no English and almost two and a half years later, with the help of their schoolteachers and gracious volunteers in after school programs, they speak English fluently. While in Jordan, the children did not have access to the best education, nor were they able to attend school as frequently as they would have liked while back home in Syria due to the war. Today, Wissam and Dima’s two eldest sons attend one of the top public high schools in the city, Northeast High School, and their youngest daughter recently accepted a scholarship to Germantown Friends School, one of Philadelphia’s top private schools.

Embarking on their third year here in the United States, Wissam, Dima and their three children continue to embrace the city as their new home and those who have helped and continue to help them do so.

Christina Grierson is an intern at the Chestnut Hill Local.