Surf and Turf brings fresh seafood to Market at Fareway

Surf and Turf brings fresh seafood to Market at Fareway 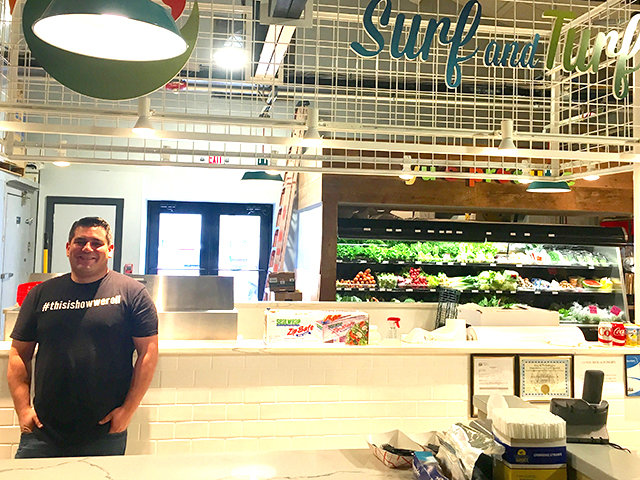 Michael Barlettano at his new Market at the Fareway stand: Surf and Turf. (Photo by Julia DeGregorio)

Summer’s come early this year, or at least the food has. Frequenters of the Market at the Fareway will soon notice the new Surf and Turf Market which is set to open officially on April 22.

The new Surf and Turf Market is exactly what it sounds like. The market features a full-service seafood market and a take-out grill which offers a wide variety of both land and sea dwelling creatures.

The market is based off Michael  Barlettano’s successful “Surf and Turf Truck,” which was ranked the 40th best food truck in America and has won various other accolades. The truck has become increasingly popular in the Philadelphia and New Jersey areas. The idea for the truck was originally born out of a love for food and the growing food truck scene in Philadelphia at the time.

Barlettano has a passion for fresh seafood and a bounty of experience to match. After running the food truck for five years. he decided to take the next step in his business.

The idea to open up a brick and mortar store, as opposed to a truck, came when the Market at the Fareway approached Barlettano with the concept. They felt that the market was missing something and that fresh seafood was a needed addition.

The Market at the Fareway, he says, is the perfect place for his fresh seafood market and grill because all the other vendors also offer high quality goods. He believes his market will fit the atmosphere and meet the needs of shoppers.

“Fresh seafood is really the last piece of the puzzle for the market,” said Barlettano.

Barlettano has plans to expand the services offered by the Surf and Turf Market as it gains popularity. The market will include a lobster tank, oyster bar, more menu items and delivery service in the coming months.

Barlettano is confident in the quality of the food, both fresh and prepared, sold at the Surf and Turf Market. Everything, he says, is handled and prepared with care.

“You’re going to get the highest quality seafood here,” he said. “Everything we sell is 100 percent fresh.”

Customer service is also important to Barlettano. Whether it’s shucking oysters or helping a shopper select the right cut of fish, he believes it’s essential to do it with a smile and positive attitude.