Genevieve Betts, a widely published poet, teaches writing classes as an adjunct professor at Arcadia University in Glenside. by Len Lear “This book will make you laugh aloud, but it will also make … 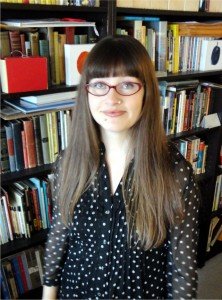 “This book will make you laugh aloud, but it will also make you feel tender about all junky, ugly, poor, poisonous, regular and vulnerable things of this world that Betts so tenderly notices.”

These words are part of a review by Sarah Vap, author of “End of the Sentimental Journey,” about a stunning new book of poetry, “An Unwalled City” (Prolific Press, $14.95), by Genevieve Betts, who teaches poetry for Arcadia University’s MFA program in Glenside.

According to Cynthia Hogue, author of “Revenance,” the local professor “is an empiricist of the im/material world, crossing real borders in that imaginary country called memory, traveling across states’ lines of the mind and heart … Betts observes life and death in the balance with a keen and unblinking eye … ‘An Unwalled City’ is a breathtaking debut volume.”

Unlike so much modern poetry that is really arcane and inaccessible to the general reader, Betts’ work is filled with rich and iconic imagery, humor and reflection that can be enjoyed by those who have not spent years in graduate school courses.

The main themes in “An Unwalled City” are childhood and motherhood. The book has two parts. The first part deals with Betts’ own experiences with motherhood, and the second part looks back at her childhood. There’s also an underlying examination of place that includes her history in Philadelphia.

“I guess I have to admit that death comes into the picture, too,” she said last week. “It’s hard not to think about death in tandem with birth, so tales of almost getting shot in my crib when my dad was a copper miner emerged, as well as the murder/suicide that happened next door after my first son was born in Philadelphia.”

Genevieve, 36, grew up in Tempe, Arizona, where her father is a test operations supervisor for Nissan cars. “He would do all kinds of crazy tricks with my family in the car. I’d like to say that doesn’t happen anymore because I get carsick so easily, but just last winter he took us out on some wild test tracks. I had to keep taking breaks to let my stomach settle between drifting in and out of donuts and wheelies.”

Betts was inspired by poetry as a child when she found an old copy of Walt Whitman’s legendary “Leaves of Grass” in a book store. “That spurred me on,” she recalled. “I was just a sixth grader, but I knew that’s what I wanted to do with my life.

“I fell in love with the works of e.e. cummings and Ogden Nash and later with Marianne Moore, Gertrude Stein, William Carlos Williams, T.S. Eliot, Ezra Pound, Adrienne Rich and Russell Edson’s absurdist prose poems, among others. As far as my own work is concerned, there is almost no money (to be made) in poetry. Usually they pay you in copies of the magazine, but I love it, so I automatically do it.”

Genevieve earned an MFA in creative writing from Arizona State University, where she met her husband-to-be, David LeBard, who was finishing up his Ph.D. in chemistry. They came to Philadelphia because the University of Pennsylvania offered David post-doctoral work.

The couple moved to Brooklyn almost four years ago because David was offered a professorship at Yeshiva University in Manhattan. (Today David is a senior scientist at Schrodinger, a computational drug design firm in Midtown Manhattan.)

How is Genevieve able to teach at Arcadia and live in Brooklyn? “Arcadia’s MFA program in creative writing is a low-residency program. That means that students can live anywhere and ‘go’ to class. It’s a two-year program, and we meet three weeks out of those two years for residencies. Two of those weeks are on campus, and the other week is spent in Edinburgh, Scotland. I commute to Glenside from Brooklyn for the on campus residencies.”

As a lover of actual books with actual paper pages, Betts is passionate about her book collection. “I started collecting them at a young age, and I keep dragging them along with me every time I move. I even have a few first editions and rare books that I treasure, like a first edition of Kerouac’s final novel ‘Big Sur’ and a few copies of the forgone literary journal the Evergreen Review.

“The issues I have are from 1959 and 1961 with poems by Cummings, Paz, Ginsberg, Corso and other amazing poets. They’re fascinating relics, and I like to remember that even these great poets were once plodding along at the page, submitting poems to journals, just like we do now. The advertisements for things like German cabaret records and The Russian Tea Room in New York City are just a bonus!”

Genevieve and her husband have two sons: Eliot, 5, and Hayden, 2. In her spare time she spends time in the Brooklyn Botanic Garden and Prospect Park. Since she grew up in the southwest surrounded by saguaros and prickly pears and literal tumbleweeds, she is fascinated by plants that people on the east coast probably find mundane such as tulips, water lilies and cherry blossoms.