Stricken with ALS, local athlete helping save others

Carol has always been an outstanding athlete as both a young person and an adult, but she has had to give up that important part of her life. by Len Lear Carol Kleiner, 59, was always athletic. She …

Stricken with ALS, local athlete helping save others 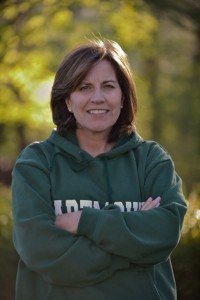 Carol has always been an outstanding athlete as both a young person and an adult, but she has had to give up that important part of her life.

Carol Kleiner, 59, was always athletic. She grew up in West Trenton, where she began played tennis at the age of 10. She did not play for her high school, Notre Dame HS in Lawrenceville, NJ, but she played in local tournaments and for George Washington University and continued playing until she was in her late 40s. “I decided to stop playing,” she said last week, “because of various aches and pains and the fact that the game wasn’t fun for me anymore.”

In 1979 Carol married Robert Kleiner, who was then a medical student at Johns Hopkins. They moved to Philadelphia, where Robert did his residency at Penn in Ophthalmology. Carol, who graduated from GW in 1978 with a degree in English Literature, was hired by John Wanamaker’s but stopped working there the day before she had the couple’s first child in 1984.

The Kleiners have three children — Meredith, who is married and lives in Chestnut Hill; Jenny, who is starting her fourth year of veterinary school at The University of Edinburgh in Scotland, and Andrew, who is the lighting director for The House of Blues in New Orleans.

Robert, who is now a retina specialist, and Carol have lived in Blue Bell for 24 years. Their children all attended Germantown Academy (GA), which is how Carol became serious about rowing. Their daughter, Meredith, started rowing during her sophomore year at GA, which had not had a rowing team for 35 years, so Meredith and three other students brought the program back.

Today it is a vibrant varsity sport with four coaches and over 30 rowers. All three of the Kleiners’ children rowed for GA, and Carol just happened to be at the boathouse one day when some mothers were going out in a boat and needed one more person. “I literally jumped in a launch and was dumped into the boat,” Carol told us.

That was 12 years ago at what is now the Whitemarsh Boat Club (WBC). Back then it was a dilapidated cinder block building with vacant buildings surrounding it. The only schools there were Mount St. Joseph and GA. Today, WBC has over 100 members, many high schools and colleges call it home, and it has a very active “Learn To Row” and Junior program. “I am very proud,” Carol told us, “to say that I was one of the founding mothers of this club.”

For more than 10 years, Carol was a passionate, totally dedicated rower. “I was accustomed to working mentally and physically hard and ignoring the minor aches and pains that are ever present in an athlete’s body,” she said. “For me, it was never a burden getting up at 5:30 in the morning or rowing an extra 2,000 meters after a full practice; it was a challenge, not a chore. When I am out on the water, all the cares of the world go away.

“Bloodied knuckles and oozing blisters were more of a badge of honor than a painful reminder of many miles on the river. When my quads burned and I was gasping for air because I had pushed as hard as I could, I felt I had given the best I had in me. In all my years of playing sports, I never felt so happy and alive as when I was in a boat, and I thought that I would be able to row well into my old age.”

However, Carol’s physically punishing athletic regimen and every other plan in her life were upended when, in September of 2013, she was diagnosed with Amyotrophic lateral sclerosis (ALS), more commonly known as Lou Gehrig's disease, a disorder that involves the death of neurons. ALS is characterized by stiff muscles, muscle twitching and gradually worsening weakness due to muscle wasting.

This results in difficulty speaking, swallowing and eventually breathing. The cause is not known in 90% to 95% of cases, and there is no cure. It is usually fatal within 2-5 years, although the world’s most famous physicist, Stephen Hawking, who was portrayed in last year’s movie, “The Theory of Everything,” has had ALS for over 50 years.

Six months after she was diagnosed with ALS, Carol created Carol’s Crew, a nonprofit organization made up of her rowing friends and some friends outside of the rowing community. Their goal is to create awareness and raise funds for research to find effective treatments and ultimately a cure for ALS. All monies raised through Carol’s Crew go directly to Project ALS, a non-profit in NY. (You can visit their website at projectals.org)

Over the past 16 months, Carol’s Crew has raised over $137,000. Last May they had their first “Miles That Matter,” in which rowers pledge their miles rowed and make a donation or have people sponsor them. Repeated again this year, “Miles” brought in about $5,000 each May. Carol’s daughter, Meredith, who is a producer, created a video that is on carolscrew.com. That has been viewed over 3,000 times on Vimeo and YouTube. They also held a river festival at the boathouse last year as well as a tent this year and last at the Stotesbury Regatta and a “Cocktails for a Cure” party last November at The Fairmount Boathouse. That event raised over $42,000.

This year they are also working with “A Date With A Plate” as their big fundraiser in the fall. This event is held every other year, and all proceeds are donated to a charity. The committee has chosen Project ALS this year. You can visit their Facebook page to read more about it. It is held at Sherman Mills in East Falls on Oct 6 and 7.

Carol said last week, “As Steve Gleason, the former New Orleans Saint player and ALS patient says, ‘NO WHITE FLAGS.’ That’s the best motto ever … It will be two years since my diagnosis in two weeks. Many things have changed. I no longer row, I sound like I’m speaking a new language when I speak, and my hands and arms don’t work quite as well as they used to. I am, however, still the same person I’ve always been. I love being with friends, still watch the Phillies and go to games.

“I am hopeful that all the research being done will help find a treatment. There are lots of irons in the fire, and we only need one to pan out. It is not just for ALS that I am hopeful about but also for the other neurodegenerative diseases like Alzheimer’s, Parkinson’s and Huntingdon’s. They are all connected, and a breakthrough in one could benefit the others. It is estimated that in 10 years 1 in 25 Americans will have one of these diseases. That is epidemic!”

No comments on this story | Please log in to comment by clicking here
Please log in or register to add your comment
Donate now to CH Local
The Latest
Phase 1C eligibility for COVID-19 vaccine starts Monday, April 12
More groups have been added to Phase 1C, including people receiving home and community-based services.