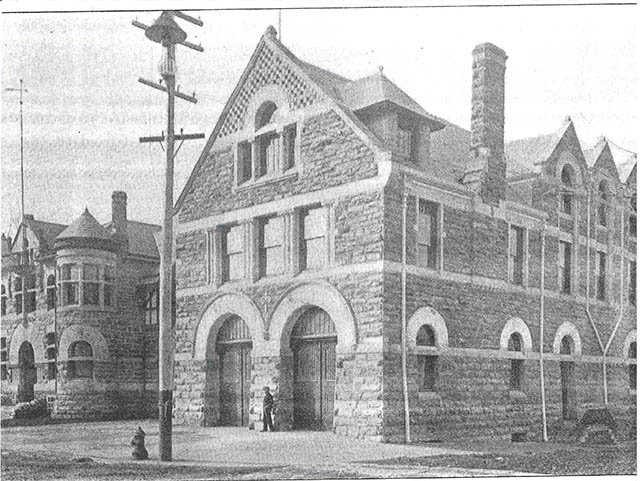 Chestnut Hill's firehouse as it looked not long after it was built. The original police station is to the left. The police station was razed in the 1950s.

Chestnut Hill can finally look forward to a new year that holds plans for the expansion of Engine 37, the 122-year-old firehouse on West Highland Avenue.

For the first two decades after the firehouse was built in 1894, the 9.5-foot wide arched doors in front of Engine 37 were more than enough to accommodate horse-drawn carriages.

Since 1916, however, the firehouse has had difficulty fitting the ever-increasing size of truck models into the building. Its present engine was built in 1991, and any newer vehicle would probably not be able to enter or leave the building at all.

Now, after years of discussions and proposals, architect Eric Leighton, project manager for the prestigious Center City architectural firm Cecil Baker, said meetings about the design of the new facility began last week. His firm has a long record of accomplishment of adaptive reuse and creative renovation.

The project is under the jurisdiction of the City of Philadelphia Department of Public Properties, which awarded Baker the project, according to Thomas McDade, chief of staff.

Not to be intimidated by the fact that their project centers on “the oldest working fire house in the city,” Baker must design a companion building that will allow today’s large engines to enter and leave the building with ease. Their biggest challenge will be designing a 21st century building that complements the existing fire station without trying to copy it.

There are a number of possible solutions, including designing a reflective surface that mirrors the existing building that is being expanded. This was done successfully in the Friends Meeting Center, built in 1974 at 15th and Cherry Street. The modern building was designed by the architectural firm Cope & Lippincott. It is completely covered with a reflective facade and becomes almost invisible to passersby who see a refection of the adjacent, original Central Friends Meetinghouse, built in 1854, rather than the sleek, boxy, newer building.

In a similar vein, the existing 122-year-old firehouse that needs to be expanded cannot be altered.  Last year the Philadelphia Historical Society voted to add the firehouse to the list of 23,000 historically recognized buildings in the city. This means, according to Emily Cooperman, a Historical Commission member and a Chestnut Hill resident, that any change to the building must be approved by the commission.

“If there is any chance of altering the facade to link the buildings, any alteration to the facade would have to be approved by the commission,” Cooperman said.

One problem the Baker architects will face designing the new building is facilitating the quick access to the trucks for the fire fighters who will probably continue to use the existing facility as separate sleeping quarters and equipment storage. They will also use the original building’s kitchen and dining area.

No matter the complications, the existing building will be preserved. It is the oldest active firehouse in the city and a city landmark.  It was designed in 1894 by John Windrim whose work includes the Franklin Institute. The design has been acclaimed as an example of Richardsonian Romanesque, a style of architecture named after architect Henry Hobson Richardson, who designed Trinity Church in Boston in 1872.

The Chestnut Hill Community Association’s Development Review Committee co-chairs Larry McEwen  and Joyce Lenhardt met with representatives from the Philadelphia Fire Department during the  long process of applying for the expansion,

McEwen said community input was important during the planning process and continues to be important.

“We are having a community meeting January 17 and hope representatives of the Baker firm will come and tell us some of their ideas,” McEwen said. “The fire house is an important community center.”

The hard work is just beginning.”

Diane Fiske is a longtime architecture writer whose work has appeared in the Philadelphia Inquirer and Main Line Times.