Stephanie Grauman Wolf delivers a lecture on the history of German Township to open a quiet room she helped fund. by Diane Fiske Streetscape is a local column about architecture, city planning and … 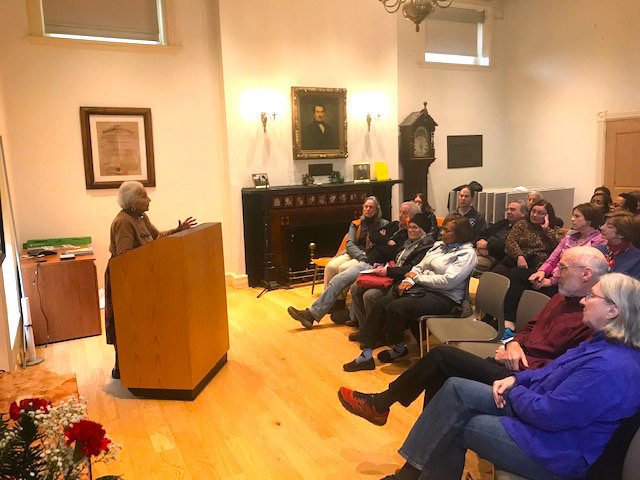 Stephanie Grauman Wolf delivers a lecture on the history of German Township to open a quiet room she helped fund.

Streetscape is a local column about architecture, city planning and design.

When someone asks Stephanie Grauman Wolf, who holds a doctorate degree in American History, where she lives, she says she answers, “Germantown.”

An exception, she said, is made when her questioner is from the Main Line.

“Then I tell them I live in Chestnut Hill,” she laughs.”

The speaker was addressing the inauguration of a new “quiet room” in the Lovett Library in Mount Airy.  Wolf, who earned her graduate degrees in history at Bryn Mawr College, and taught at the University of Pennsylvania, said she enjoys poking fun at the idea that many Chestnut Hill residents do not seem to want to admit that they live in an area that was started as Germantown in the 17th century.

Last year, Wolf and her husband, Ted, donated the funds to the Lovett Memorial Library.  Their donation was the basis for the creation of the quiet room in the renovated library.

About 100 people attended the inauguration of the quiet room in a ceremony that was sponsored by the Mount Airy Historical Society earlier this month.

The reason for the “quiet room,” Wolf said, is there are no longer librarians who say “shhh” when people talk in libraries.

Instead, she said, there are tutoring services, group meetings, language lessons and other activities that can be distracting to those who need quiet to work.  The quiet room in Mount Airy is located on the second floor of the building in a glassed off area.  It is the only quiet room in the city library system, though there are two others libraries that offer “study rooms” according to Lovett supervisor Marsha Stender.

Wolf, who wrote her thesis on the history of Germantown, said her answer about about living in Germantown (which now includes the entire Northwest area made up of   Germantown, Mount Airy and Chestnut Hill) is historically correct.

Wolf said Sommerhausen eventually became Chestnut Hill. The area of Crefeld to the north originally had fewer than 10 houses, but more it grew to 100 in 1800.

She said Germantown, the largest community, was home to any number of millers and craftsmen.  It was known, she said, for its diverse population and being “not a melting pot, but a mosaic of different types of people.” The Sommerhausen area grew during the yellow fever epidemic in 1793 when people felt they could escape the disease by relocating away from the city center.

The communities in Northwest Philadelphia “always had a German air” because they developed along a major street as they do in Germany. In the Americas, she said, development along a river or waterway was more typical.

For many years, she said, the Germantown area was known for its tanners and their craftsmanship until the trees were dissipated and the tanneries disappeared.  The industries that largely replaced the tanneries were fiber mills.

She said the area became an important community in the 19th century and Philadelphia leaders would often say that they enjoyed living in Germantown. It was far away from the city but a brisk, 45-minute horse ride from Center City.”

“The traveling time may have been a little better in those days,” she joked.

Wolf said in 1912, the 50th anniversary of the end of slavery was celebrated in Germantown, which always had a free African American population, possibly linked to its large Quaker influence.

She attributes some of the present distinction between areas to the postal zip codes introduced in the early 20th century. Before that, there was not a lot of distinction between Germantown and the other villages in the township until the post office codes became a way to tell them apart from one another.  Then, postal codes 44, 19 and 18 became important to identify communities, Wolf concluded.

Stender said the quiet room inauguration was the first of several community events that are planned for the library, which was renovated in a major project that was just completed last spring.  The large second floor meeting room where the inauguration was held was part of the library rejuvenation.