COMMUNITY FORUM State Rep. Chris Rabb, of the 200th Legislative District, hosted a community forum Feb. 25 on the topic “Where We Go From Here” that explored actions that can be taken at the … 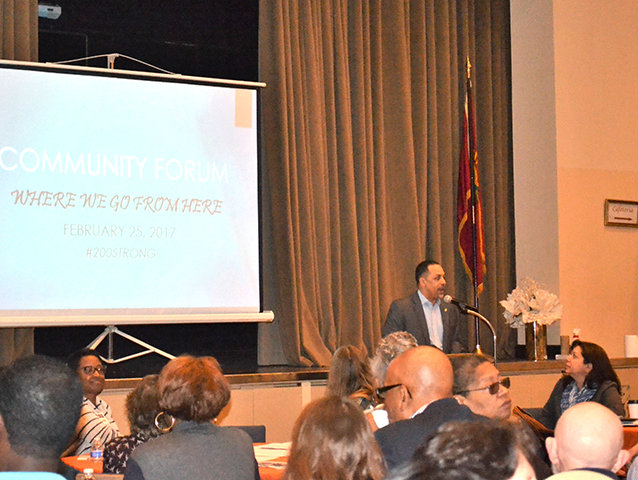 COMMUNITY FORUM State Rep. Chris Rabb, of the 200th Legislative District, hosted a community forum Feb. 25 on the topic “Where We Go From Here” that explored actions that can be taken at the local level to deal with a nation undergoing political transition. More than 200 area residents participated in discussion groups focused on issues such as health care, jobs, public education, the environment and election reform at the Masjidulla Center for Human Excellence in West Oak Lane. (Photo by Sara Greene)[/caption]

Chris Rabb, our representative to the Pennsylvania General Assembly, overcame enormous odds to win the seat in last November’s election. The Democratic Party establishment – the ward leaders and committeemen who usually select the people whose names appear on Philadelphia’s ballots – had someone else in mind. He ran an arduous and unorthodox 18-month campaign that beat the machine. His tenure in Harrisburg on our behalf is likely to be just as interesting.

Sitting in his office on Germantown Avenue in Mount Airy, I interviewed him about his plans to make a difference in Harrisburg and about his difficulties in getting elected.

“Nobody should have to go through what I did,” he said. “Our system in Philadelphia makes it far too difficult for outsiders to participate, let alone win elections.”

We talked about ways to reform the system.

“Everybody’s talking about the redistricting and the gerrymandering these days,” he said. “But that’s putting the cart before the horse. The more important problem is at the grass roots level, particularly in our city. Even if we succeed in a drawing more equitable district lines in 2020, it won’t address the underlying issue of institutionalized party control. Here in Philadelphia, a few Democratic Party politicians decide who’s going to run for office. They dictate their choices to the committeemen and ward leaders who fall into line – or else.”

Rabb won the primary election by seven percentage points in a three-person race, the first true contest for the seat in 30 years. Since the early 1980s, until Rabb’s victory, the hand-picked candidates who “won” special elections had gone on to win the Democratic primaries in the spring and the general elections in the fall. Rabb outworked his opponents, spending every waking moment knocking on doors, enlisting volunteers and donors, organizing through social media, and speaking to whoever would listen.

The primary victory was the win that mattered. In our district, Democratic candidates who win the spring primary always win in the fall. Even so, Rabb worked hard from April to November, an energetic reformer with an uncommonly intellectual approach to politics.

Rabb is 47 years old, an author and educator whose work focused on studying small business and helping entrepreneurs overcome the hidden obstacles to success. Raised in Chicago, a Yale and Penn alumnus, he began his career as a U.S. Senate staffer and as a member of the White House Conference on Small Business during the Clinton Administration.

In 2010, he published a book titled “Invisible Capital: How Unseen Forces Shape Entrepreneurial Opportunity,” an extended treatise on the sources of success and failure in America. As an adjunct professor at Temple’s Fox School of Business, he successfully organized 1,500 fellow adjunct faculty, whereupon Temple chose not to renew his contract.

Less than two months after being sworn-in, he is sponsoring legislation. He’s gotten three bills docketed so far:

And he’s working hard to get four others into the pipeline:

Cognizant of the overwhelming Republican majorities in the General Assembly,  Rabb does not expect any of the proposed legislation to pass.

“But that’s not the point,” he said. “My job is to be a Pennsylvania representative as well as a representative of the 200th. These initiatives ought to be supported by our entire state. But it’s up to us, as Democrats, to deliver the message. I author these bills because it’s my job.”

Three of his office walls are covered with recent, computer-generated maps of Pennsylvania and our region. He stood at one of them, pointing out different colored blotches – some big, some tiny like our super-dense 200th. His hand swept across the map from Pittsburgh to Scranton.

“I’d like to visit every one of these places. I’d love to talk to the people who live outside the city and find out what their concerns are. I believe there is so much that we have in common. That’s why I am excited to be on the Agriculture and Rural Affairs committees. And I’m on four other committees, not including the Policy Committee, which is open to all members of the Democratic Caucus."

Rabb is learning to budget his time – the new job comes with a lot of obligations as well as opportunities. As a result of the 2016 election debacle, Pennsylvania Democrats are stretched very thin in both houses of the General Assembly. Their numbers are so low that they have to attend more simultaneous morning committee meetings than a sane schedule permits. They are outnumbered 119 to 84 in the House, the smallest Democratic Caucus in over a half century. They are outnumbered in the Senate 20 to 30.

The legislature is called to order on three weekday afternoons, each voting session preceded by party meetings during which the legislation is discussed. And there are the receptions and sponsored events in the evenings. When he’s in Harrisburg, Chris Rabb is a busy guy.

I asked him why Pennsylvania Republicans are so antagonistic to Philadelphia.

“Because there’s no political advantage to giving money to people who aren’t going to vote in your district,” he said. “And you never hear them say they have too much money. The concept of equitable distribution of resources is far less important to them than getting as much as possible for their constituents."

When the General Assembly is not in session, he welcomes his constituents to visit his office at 7216 Germantown Ave.

Stan Cutler is a novelist and regular contributor to the Local.