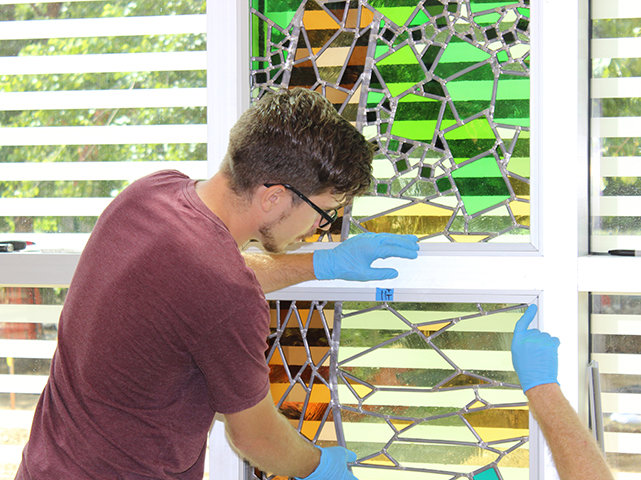 As part of the Free Library of Philadelphia’s Building Inspiration: 21st Century Libraries Initiative, a project financed by a $25-million grant from the William Penn Foundation, two new stained-glass works of art were installed in Lovett Memorial Library, 6945 Germantown Ave. in Mt. Airy, on Aug. 10.

Lovett was one of four neighborhood libraries across the city to receive site-specific public art commissions.

“The design process involved community, stakeholder and city interactions, and resulted in a series of windows that reflect the community’s love of its natural surroundings and the joy of exploration and imagination,” O’Neil said. “Stained glass is a unique medium in the wonder of its materials and in its unusual design limitations. I enjoy the challenge that this creates.”

In an article in the Free Library of Philadelphia’s Magazine “Off the Shelf,” he said community members “value education and nature against a backdrop of history, architecture, and art.” He noted that Northwest Philadelphia has a long tradition of stained glass.

After walking around the neighborhood and developing a vision statement with the community, he “proposed a series of pictorial stained-glass windows depicting children, animals, and the natural and fantastical words to which books take us.”

For the last two months, O’Neil has been working in his studio in East Falls designing, planning, cutting, hand-painting and soldering the two art installations.

“This Place,” which consists of two vertical window panels and is made up of 500 pieces of stained glass, was inspired by the mural of the tree on the old library.

“It is an abstract representation of a sycamore tree on top of a little brick arch with ivy,” he said.

The work seeks to capture the community’s passion for nature, history and art.

His other installation, “Exploration,” which consists of three stained-glass panels, is made up of six scenes and each scene contains characters and books. It has roughly 450 pieces of stained glass.

O’Neil, who used to live in Northwest Philadelphia before moving to Manayunk, said he was inspired by the shape of the windows in the new children’s library.

“They kind of remind me of oversized book shelves,” he said.

He added that as a stained-glass artist, he loves exploring how he “can bring new light and color to contemporary spaces.”

O’Neil explained that in order to create intricate details in “Exploration,” the glass has to be painted. He said after the glass is painted, the pieces are fired to fuse the paint to the surface of the glass. Allowing the artist to create a variety of shades by controlling the light.

Jacque Liu, manager of the Percent for Art Project, said the public art installation was funded by the City of Philadelphia's Office of Arts, Culture, and the Creative Economy's Percent for Art Program. He said Percent for Art was created by a city ordinance that requires the city to spend one percent of all capital projects over a million dollars on public art.

“In 1959, Philadelphia pioneered the Percent for Art model, requiring the inclusion of site-specific public art in new construction or major renovation projects,” he said. “This city program recognizes the importance of public art and the positive effects it has on people’s lives, even if we are not fully appreciating each and every moment. By creating a culturally significant object in the urban landscape, we are able to improve the physical landscape and the lives of our citizens. It is worth noting that the Percent for Art Program has since been replicated numerous times across the country.  We are excited to add Cooper O’Neil’s work at the Lovett Memorial Library to our city’s public art collection through the Percent for Art Program.”

Siobhan A. Reardon, president of the Free Library of Philadelphia,  said she was “grateful to Cooper O’Neil for engaging with the community to bring both beauty and joy to the library through his stained glass.”

"Having beautiful art inspired by the Mt. Airy community and its history as a center for stained glass making is one of the most special things about the new Lovett Memorial Library,” Reardon said.

DiCicco out, Temple’s Bergman takes over as zoning chair