Sabrina Wang dry-brushing a skull during her ASB internship at the Mütter Museum. by Karen Tracy It’s not for the faint-hearted. That was discovery number one for Sabrina Wang. A rising junior at … 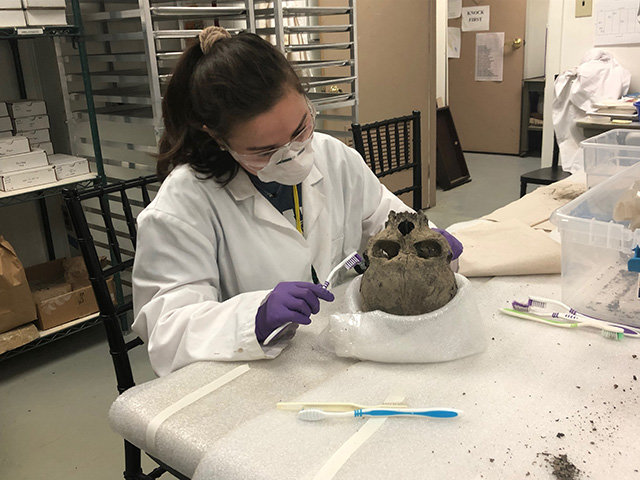 Sabrina Wang dry-brushing a skull during her ASB internship at the Mütter Museum.
by Karen Tracy It’s not for the faint-hearted. That was discovery number one for Sabrina Wang. A rising junior at Springside Chestnut Hill Academy. Wang spent three weeks this summer methodically washing dirt off 250-year-old bones as part of an internship with The Mütter Research Institute’s Arch Street Project. She was joined by fellow SCH student and rising senior Haotian (Bill) Cao. In late 2016, a construction crew at the site of the former First Baptist Church of Philadelphia on 218 Arch Street discovered human remains in the process of digging a foundation. The bodies had been interred in the cemetery between 1707 and 1858. By February 2017, the construction crew had discovered multiple coffins still interred at the site and work was halted until the remains could be excavated. More coffins were discovered in June, and by October 2017, more than 450 individuals had been recovered. The inhabitants of the cemetery should have been moved in the 19th century to Mount Moriah Cemetery when the First Baptist Church sold the land. A cadre of dedicated scientists and volunteers with the Arch St. Project has been meticulously documenting the remains found at the 218 Arch Street construction site—fragment by fragment. The shelves in the basement lab of the Mütter Museum are lined with carefully-marked boxes containing human remains and the location of each grave. Wang and her classmate Cao had the opportunity to join the team at the Mütter after Anna Dhody, a 1993 Springside alumna and the director of the Mütter Research Institute and curator of the Mütter Museum, came to the school as the Kleckner Scientist in Residence this past spring. The young scientists leapt at Anna’s request for volunteers and the chance to do real science while contributing to the project. Wang’s mother, Dr. Kim Eberle-Wang, a science teacher at SCH since 1996, is also working as the Bone Lab volunteer coordinator over the summer. Each day the students reported to the bowels of the museum where, on the wall of the lab, there is a map showing the specific location of each coffin that was removed. According to the map, there were bodies stacked in coffins, sometimes three deep. “It was a bit like bone Jenga,” Wang said. 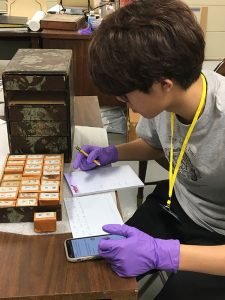 Haotian (Bill) Cao translating names of herbal medicines from Chinese to English for the Mütter Museum’s Collection.[/caption] Each day, the students would pull out a box and tackle a specific “G number.” These numbers were assigned during excavation to each set of remains. Using simple but effective tools such as wooden skewers and toothbrushes, the work involved a thorough dry brush phase to pick off the larger clumps of dry dirt, making sure to keep the bones from the various body parts together. After that, they had to evaluate the integrity of the bone fragments, before following up with the wet brush phase. Those bones that were more fragile and might not withstand the water rinse were set aside. After cleaning, the bones were put on baking trays to dry and stacked on industrial metal kitchen racks.  Initially, Wang worried about damaging the artifacts, but realized she had to put that out of her mind in order to be able to get the work done. “It was a bit of an emotional roller coaster,” she confessed. “I was pretty scared to start. The work is important and the bones were intimidating. Then, once I got used to it, I got a little emotional thinking I was handling the remains of dead people.” She acknowledged this prompted a few thoughts about her own mortality: “This is how we will all end up,” she said. There’s a lot to learn—both procedurally and from the bones themselves. The students’ “Bone Diary” detailed many of their takeaways, such as how to differentiate between male and female skeletons by examining specific bones and how to extract a shriveled-up brain through the foramen magnum—the hole in the base of the skull. “The education and training that the SCH students receive enabled them to provide valuable assistance to our project,” said Dhody, who oversaw the students while on site at the Mütter. “I saw this firsthand as the Kleckner Scientist in Residence in May. I was more than happy to have Sabrina and Bill volunteer this summer, and the work they do will help us move forward and learn more about these individuals.” Interestingly, Cao, an international student at SCH who speaks Chinese, Japanese and English, enjoyed another challenge while interning.  He was asked to help translate the names of Chinese medicinal herbs from a Chinese Herbal Medicine Box which has been in the museum's collections since 1940 without any translation. Wang’s leaning towards science is not terribly surprising, with both her parents holding Ph.D. degrees in pharmacology. She looks forward to exploring her interest in design and robotics down the road. As for the bones?  In 2023, after the scientists involved in the project have finished their analysis, the remains will be reburied at Mount Moriah Cemetery, along with the material culture with which they were found. Nearly 300 years later, the inhabitants of the First Baptist Church Cemetery will finally go to their intended destination. To learn more about The Mütter Research Institute and The Arch Street Project and how you can support this important research at this website please visit: www.archstbones.com Karen Tracy is Director of Communications at Springside Chestnut Hill Academy.