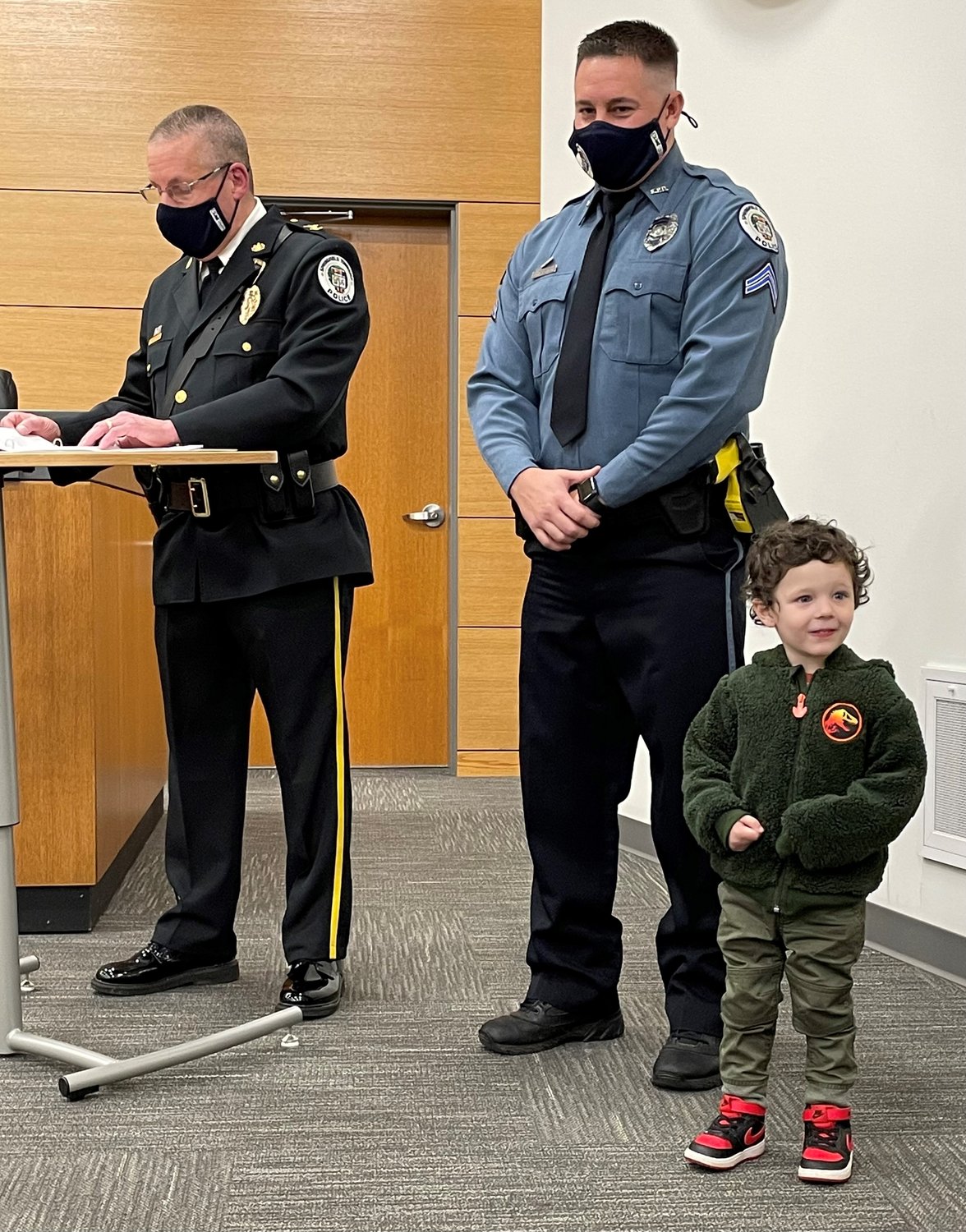 Police Chief Michael Pitkow highlighted each officer’s accomplishments and noted that all of the department’s officers have completed de-escalation and communication and anti-bias training and many have also completed basic and advanced crisis intervention training.

The source of the Board of Commissioners concerns about The Springfield Township Police Benevolent Association (“PBA”) at its November Workshop meeting stemmed from the negative connotations for the community of the BPA’s Thin Blue Line/Blue Lives Matter flag logo that it adopted in 2020.

At the board’s November workshop meeting, Commissioner Graham demanded that the Board address the issue, stating that the flag has become associated increasingly with white supremacy, a sensitive issue for all township residents and especially for residents of color, who make up about 10% of the Township’s population. He noted that the results of the recent police and community relations survey showed that close to 7% of township residents who completed the survey feared retaliation. Graham asserted that the board would not hesitate to take a stand against the use of a symbol as controversial as the Thin Blue Line flag if it hurt any other disenfranchised group.

Township Manager Mike Taylor reported that the PBA is aware of the issue. In a subsequent telephone interview, Taylor said that the commissioners are currently in the process of finalizing a meeting date with PBA members to discuss the matter before the board’s December meetings.

But other groups have transformed the flag’s symbolism to one that counters law enforcement’s core principles and has become increasingly divisive. While law enforcement views the flag as a sign of solidarity, the symbol conveys a different message to the public, namely an ‘us versus them’ mentality where the community is viewed as a potential enemy or a threat.

Jay Overcash, developer of the mixed-use condo/retail building on the 900 block of Willow Grove Avenue, presented a preliminary development proposal for 14 townhomes on the 1.2-acre property located at 1110 Willow Grove Ave., which originally housed a private school. He intends to ask for three variances (use, density, and front yard setback) via a zoning board hearing but wanted to know how he should meet with the neighbors. Commissioner Jeff Harbison suggested that Overcash hold a neighbor meeting at the firehouse, after which the Planning Commission would schedule an informal presentation.

Board President Baird Standish reported at the Workshop meeting that the Township received a map from Mr. Halligan on November 4, with one building superimposed on the Haws Lane property entitled, “Behavioral Health facility.” Halligan asked for time to make an informal presentation at the Planning Commission’s meeting on December 16. Taylor noted that notifications for the meeting were sent out to Haws Lane neighbors on November 5.

Commissioner Harbison gave a summary of the 2022 proposed budget for $18 million. There will be no increase in property taxes and a slight decrease in the refuse service fee. The budget hearing and adoption are both scheduled for Wednesday Dec. 8, 2021 at 7:30 p.m. The meeting will be held in-person at the Springfield Township Administration Building, 1510 Paper Mill Road, Wyndmoor. Masks are required.

The Pennsylvania Department of Transportation has approved a 15 mph School Zone light at Papermill Road and Montgomery Avenue.

Mermaid park tree planting: Springfield Township partnered with the Environmental Advisory Commission and Delaware River Keepers for a native planting event at Mermaid Park in Wyndmoor, on Saturday Octob 30th. Thirty volunteers from the community joined the planting efforts.  The planting was part of the Mermaid Park Stream and Habitat Restoration Project, funded in part by the Township and TreeVitalize grant.

Germantown church may be demolished

The saving of Abolition Hall: A case study