Eddie T. Graham resigned his position as president of the Springfield Township Board of Commissioners in a town meeting Wednesday evening, citing “white fragility” as a key reason. 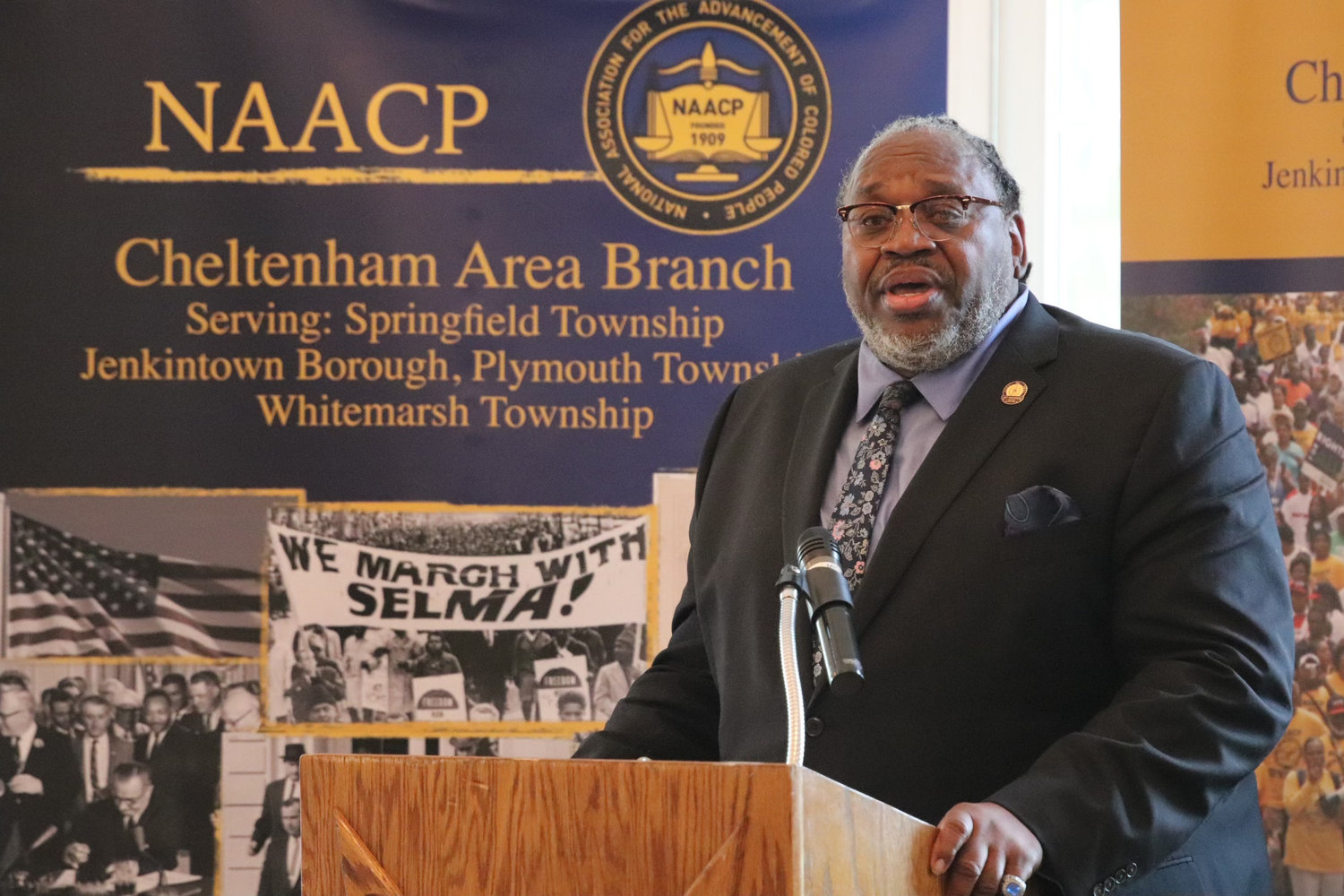 Springfield Township Commissioner Eddie Graham, who just resigned as president, is also the president of the NAACP’s Cheltenham Branch. He is seen here speaking at that organization's Freedom Banquet in June.
Posted Thursday, October 20, 2022 12:00 am
by Tom Beck

“Some people in our community live in a social environment that protects and insulates them from race-based stress,” said Graham in his resignation letter, which he read aloud at the meeting. “This insulated environment of racial protection builds expectation of racial comfort while at the same time lowering the ability to tolerate racial stress, which I refer to as white fragility.”

The resignation ends Graham’s 10-month tenure as the board’s president, which was marked by frequent moments of racial tension - especially from residents who were unhappy with the board’s attempts to convince the Springfield Township Police Benevolent Association to change its logo, which includes the Blue Lives Matter flag.

“It is incumbent for all people - but mostly important political leaders and other influential community leaders - to firmly denounce racism and hatred and speak out for those who are oppressed and marginalized,” Graham said at Wednesday's meeting. “And this emblem that the Springfield Township PBA uses is one of those emblems that creates that environment within the African American community.”

But it wasn’t just that issue that prompted the resignation, Graham said. He listed other incidents that have upset him during his time as president. In one case, he said he was introduced by a fellow board member as “the commissioner who brings color to this board.” In another, he said he had to “admonish” the board for using the racist term “sambo” in emails between commissioners. He also said he once came across a sign in the community calling him a “race hustler.”

“We are blessed to have a great police department here in Springfield Township,” Graham said. “No community, including the African American community, doesn’t realize that it takes a special individual to get into law enforcement and give service.”

Over the course of numerous meetings, residents who support the PBA’s right to choose their own logo have accused Graham and the board of what they said felt like an attack on police. That continued Wednesday night.

“Many people…are offended that the police are under attack or the Benevolent Association is under attack,” said one resident, Angelina Banks, in Wednesday’s meeting.

“Why are you going after the PBA? They are a private organization,” said Linda Furlong, another resident. “This is ridiculous.”

But Graham insists that this, along with other claims about him, isn’t the case.

“It’s like the louder you tell a lie, the more it becomes truth,” he said. “I think the thing that bothers me the most is that because this particular issue has gotten the attention of the media and social media, [discourse surrounding the PBA emblem] has been going off the deep end. It’s something that’s been accumulating since I’ve been with the Springfield Township Board of Commissioners.”

Graham said he believes the attacks on him are a result of Springfield’s majority white community being uncomfortable with addressing the needs of the township’s Black community.

“You have a Black commissioner who is for the first time addressing the needs of the African American community, and I think people don’t want to readily accept that this sort of discriminatory behavior occurs in Springfield,” Graham said. “As the person who is actually bringing these issues out into the open, I think people retaliate.”

At the end of Wednesday’s meeting, one of Graham’s fellow commissioners - Susanna Ratsavong - came to his defense during the meeting’s closing comments. She thanked Graham for his service as board president. She added that fear of the police is a “real thing” among certain minority communities.

“It happens to many people, certainly more among people in the Black community,” she said. “I would hope that all of us would want all of our community to not have that fear – to actually have that trust and feeling of trust with our police force here in our community.  It’s a general tenet that we should strive toward that for everyone, no matter what the situation is.”

She went on to specifically recognize Graham for enduring especially harsh treatment during public meetings from certain residents.

“It was very stressful for Commissioner Graham, I’m sure, to experience some of the commentary that he did experience,” she said.

Graham, however, said he felt Ratsavong’s comments were too little too late.

“During a major part of the retaliation against me, not one person spoke up in my defense,” he said. “Commissioner Ratsavong said something after the room cleared, but I need your support in the battle.”

Graham said he wasn’t surprised that Pitkow hadn’t responded to the Local’s requests for comment.

“I don’t know why Chief Pitkow refuses to engage on issues like this, but it’s been the way he has acted historically since I’ve been a commissioner,” Graham said. “He kind of deflects from answering those hard questions.”

But despite his criticism, Graham was quick to once again point out his support for the Springfield Police Department.

“I do have faith in our police department and the PBA that we can come up with an amicable solution to make everyone in the township happy,” he said. “It’s like a family. I don’t know any family that doesn’t have some disagreement.”