Zydeco-a-Go-Go, a frequent summertime performer in Chestnut Hill, will bring the swampy bayou sounds of southern Louisiana to Pastorius Park with a free concert on Wednesday, June 26, 7:30 p.m. by … 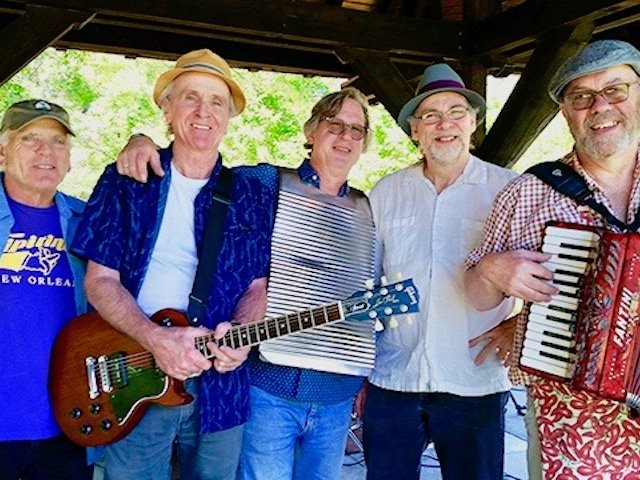 Zydeco-a-Go-Go, a frequent summertime performer in Chestnut Hill, will bring the swampy bayou sounds of southern Louisiana to Pastorius Park with a free concert on Wednesday, June 26, 7:30 p.m.

Zydeco-a-Go-Go, Philadelphia’s hardest-working zydeco band, returns to Pastorius Park with a free concert on Wednesday, June 26, at 7:30 p.m. A Chestnut Hill favorite, the band has played several times at Pastorius Park and was invited to play last year as part of the 70th anniversary celebration of the concert series.

For those who have never heard zydeco music, Eshelman explained that at its core, zydeco is dance music. Its infectious, toe-tapping sound will have you up on your feet in no time.

Born in the early to mid-20th century in the bayous and countryside of Louisiana, zydeco borrows from rhythm and blues traditions and New Orleans rock and roll. Zydeco music is easily identified by the signature instruments that are played.

“Zydeco is always going to have an accordion and a ‘frattoir’ (rub-board) along with a drum, electric bass and guitar. Sometimes a saxophone and fiddle are added. Another key identifying factor is that most zydeco music is sung in Creole French,” Eshelman said.

“The music we love and are putting out there is the old school zydeco music brought to the mainstream by Clifton Chenier, ‘Boozoo’ Chavis, Geno Delafose and Beau Jocque. We mix other things in there, but that’s our main body of work.”

Eshelman is looking for a way to pay tribute to the legendary Dr. John, who died on June 6. The winner of six Grammy Awards, Dr. John, with his distinctive sandpaper growl of a voice, was inducted into the Rock and Roll Hall of Fame in March 2011.

“I have always loved New Orleans music and, without a doubt, my all-time favorite New Orleans artist is Dr. John. I have enjoyed his music on records and CDs and live in concert many times, going back to the early 1970s. Philly Gumbo (another local band that plays a mix of New Orleans music) opened up for him at the Chestnut Cabaret one year. We got to talk to him. He was a nice guy, down to earth, friendly and easy to talk to,” recalled Eshelman, also a founding member of Philly Gumbo.

While trying to decide which Dr. John song Zydeco-a-Go-Go will play, he added, “It’s hard to play one that is real well known, such as ‘Right Time, Wrong Place,’ because people become attached to the original artist’s arrangement and voice.”

Zydeco-a-Go-Go has attracted a loyal following, especially from Allons Danser, a local zydeco/Cajun dance group whose members show up whenever and wherever the band is appearing. “These zydeco ‘regulars’ get the party started, and then everybody gets up and dances. We love the Pastorius Park series and the Chestnut Hill community. The audience is very appreciative, interactive and fantastic. We’re really looking forward to coming back.”

More information about the band can be found on its Facebook page. Pastorius Park is located at the corner of Millman Street and Hartwell Lane. In the event of rain, the show will move to Springside Chestnut Hill Academy’s Chapel at the Inn, 500 W. Willow Grove Ave. The free Pastorius Park Summer Concert Series is supported by the Chestnut Hill Community Association and the main sponsor, Chestnut Hill Hospital.

A surge in reckless driving gets residents organized
When 21-year-old Dia Lee was struck and killed by a speeding Tesla in Germantown last week, many residents of Northwest Philadelphia were shocked, but not surprised.