Andrea's newest musical release, "Out of My Dreams," a collection of 10 songs dedicated to the musical genius of Rodgers & Hammerstein. Over 50% of the proceeds of the CDs' sale will go to #SaveOscarsHome. 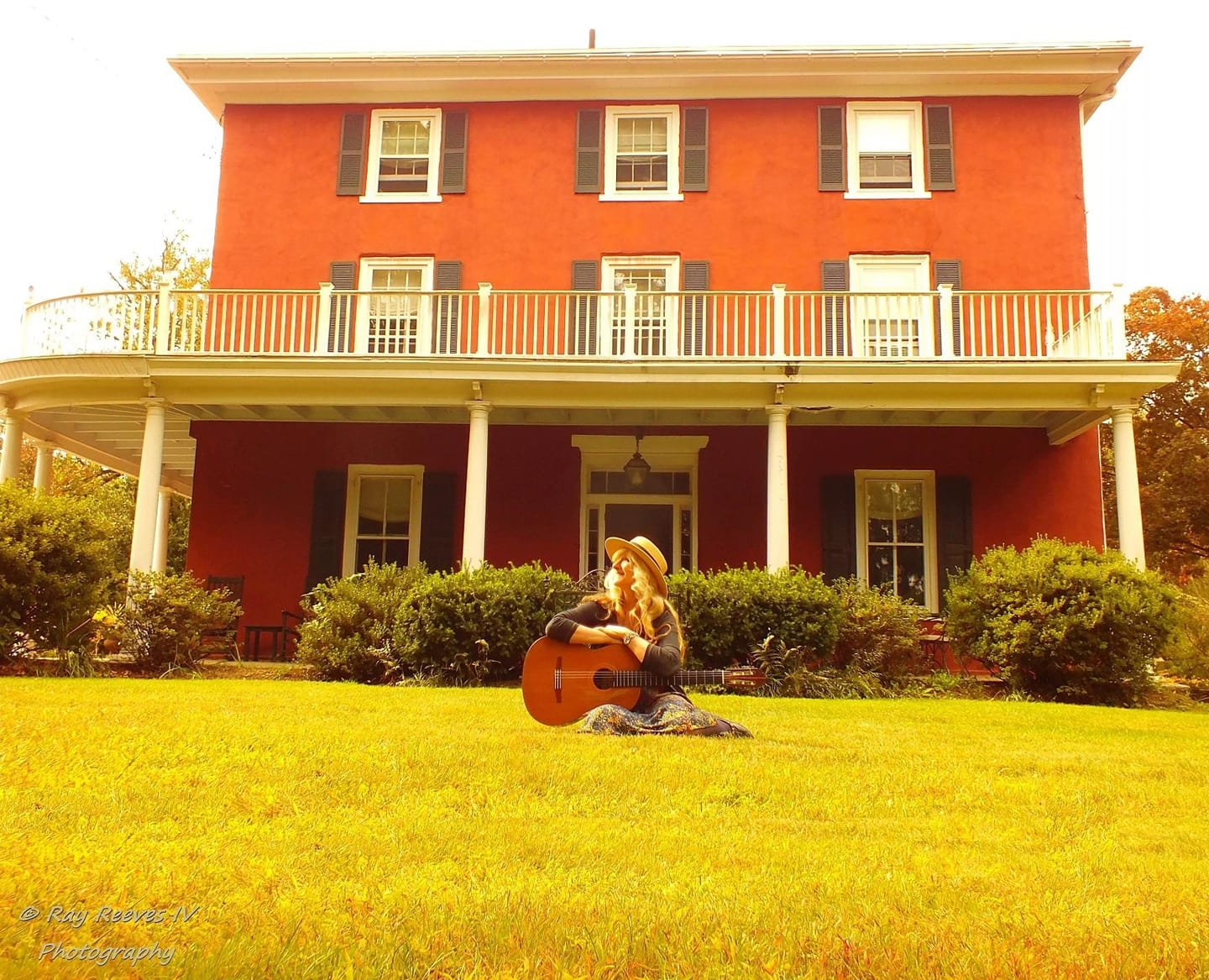 Andrea in front of Highland Farm, the historic home of legendary Broadway lyricist of 850 songs, Oscar Hammerstein ll, from 1940 to 1960. Carlson is devoting 50% of the sales of her new CD of Hammerstein's music to the effort to save the house. 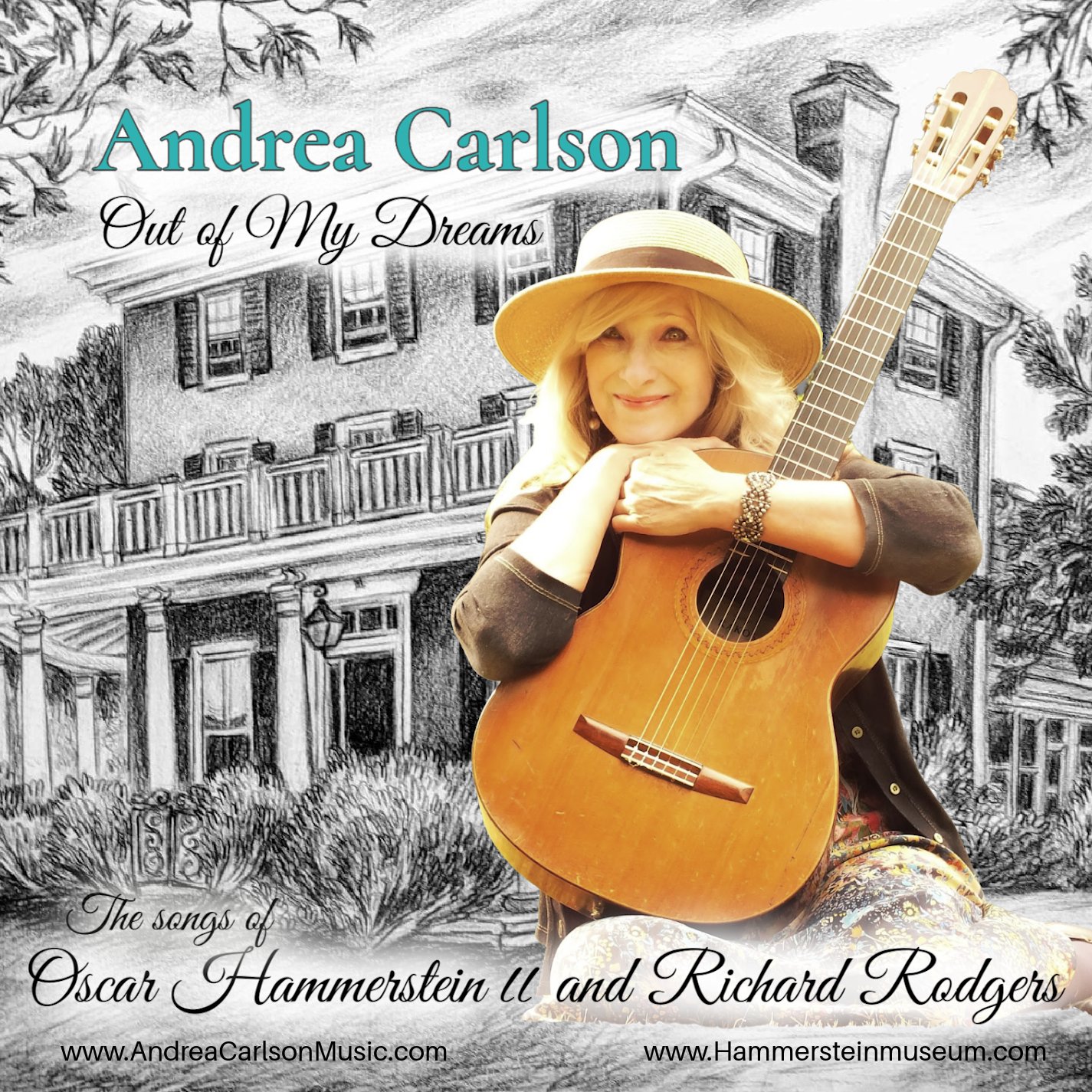 Andrea Carlson is a multi-talented guitarist, vocalist and artist who was a regular performer at Paris Bistro as well as many venues throughout the Philadelphia area, New York, New Jersey, Delaware, Chicago and L.A. She has also performed throughout Europe since 2013 — in London, Paris, Amsterdam, Barcelona and Edinburgh, etc. As of 2015, she is an official part of the Fringe Festival Edinburgh. Before the pandemic, she also taught two days a week at Settlement Music School in Germantown and one day at their Willow Grove facility. Since March, she has been teaching at both virtually.

Unlike so many musicians who have been sabotaged by the pandemic, however, Carlson has been as busy as ever. Her French jazz CD, “Aimez-vous, bien,” was released just as the pandemic was in first gear. “Music took on even more meaning and purpose than ever before for me,” Andrea said last week. “I not only needed it for my own salvation but also to bring the greatest good to others. I started doing weekly livestream shows through my Scottish group of musicians 'Quarantine Gigs.' I did this every Sunday for six months!”

And in July, Andrea began to work passionately on a new project because of her love of the legendary Broadway musicals of Rodgers & Hammerstein. “The former home of Oscar Hammerstein ll, Highland Farm, from 1940 to his death in 1960, is in danger of being lost,” she said. “A group is raising funds to save it by fully restoring its 1840s' glory, as well as turning it into a museum and educational center! It is located just two miles away from my home in Doylestown.”

When she learned about this effort, Andrea was greatly moved and inspired to use her art to help this cause. She spent countless hours studying the property's history and making intimate arrangements of the rich collection of music that was written there. “I couldn't seem to stop,” said Carlson, who created four sketches and an oil painting of Highland Farm that she donated to them to be auctioned off to raise more money for the restoration and museum.

Andrea's newest musical release, "Out of My Dreams," a collection of 10 songs dedicated to the musical genius of Rodgers & Hammerstein and to Highland Farm, features songs from the timeless musicals created there: "Oklahoma," "Carousel," "Allegro," "South Pacific," "The King and I" and "The Sound of Music."

“This album is part of another inspiration, begun before Covid,” said Andrea. “It was my dream for 2020, the release of two albums, thinking of the alliteration of 2020 but also the clarity of vision! 'Aimez-vous, bien!' is jazz, in French and accompanied by my 'Gendarmes d'amour' (Love Police, her backing band). By contrast, 'Out of My Dreams,' music of the American musical theater, is performed solo with only my guitar.”

A few years ago we asked Andrea her age, and she replied, “Hmmmm ... 28; that’s how old I feel.” Born in Knoxville, Tennessee, Carlson moonlighted as a vocalist throughout her studies with several different bands, doing music from the '20s, '30s and '40s. This continued for 10 years, and she was able to perform in many of the nation’s top venues and festivals. A highlight was opening for the one and only James Brown!

“I was in a fabulous band called Airflow Deluxe in Chicago,” she explained in an earlier interview. “It was a 'little' eight-piece Big Band fronted with four vocalists, and I was one of them. We did four-part harmony in music that spanned from the '20s though the '40s. The whole band was flown to Forth Worth, Texas, for a private event that featured James Brown. I have never experienced so much electricity from any performer ever. But then, I was standing less that 10 feet away from him!”

The official release and mailings for "Out of My Dreams'' began on Andrea's birthday, Nov. 27.ﾠ Over 50% of the proceeds of the CDs' sale will go to #SaveOscarsHome.

“I want to personally thank my brilliant engineer and producer, Glenn Barratt, of MorningStar Studios (in Ambler) for making this happen right on target, and David Bopdrummer Yager (yes; Bopdrummer is actually a drummer!) for his tireless work for all things necessary for production! So much goes into a project like this.”

For more information, visit andreacarlsonmusic.com. Len Lear can be reached at lenlear@chestnuthilllocal.com