In celebration of the Feast of St. Michael the Archangel and All Angels, St. Paul's Episcopal Church held a Choral Evensong on Sunday, Sept. 29. by Michael Caruso St. Paul’s Episcopal Church, … 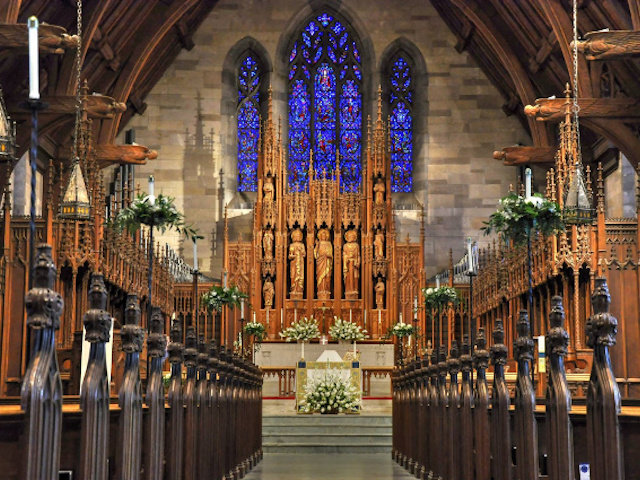 In celebration of the Feast of St. Michael the Archangel and All Angels, St. Paul's Episcopal Church held a Choral Evensong on Sunday, Sept. 29.

St. Paul’s Episcopal Church, Chestnut Hill, marked the Feast of St. Michael the Archangel and All Angels with a Choral Evensong on Sunday, Sept. 29. Music director Andrew Kotylo led the parish’s adult choir and played its remarkable Aeolian-Skinner pipe organ in a roster of beautiful music in renditions that explicitly affirmed the reasons for his hiring as Zachary Hemenway’s successor. One of Greater Philadelphia’s leading church music programs is unquestionably in superb hands.

St. Michael, mentioned in both the Old and New Testaments, is best known as the commander of the hosts of Heaven who expels Satan from Paradise. But he is also the bringer of peace to the world roiled by sin as told in the Books of Daniel and Revelation.

The choral portion of the Evensong included Gerre Hancock’s “The Lord is in his holy temple” at the Introit, H. Walford Davies setting of “Psalm 103: Praise the Lord, O my soul,” the “Magnificat” and “Nunc Dimittis” from Stephen Caracciolo’s “Evening Service in A,” and Edward Bairstow’s anthem, “Let All Mortal Flesh Keep Silent,” at the Offertory.

In all five works, Kotylo drew the kind of singing from his choir that made it unnecessary to read the words of the text because the sheer sound of the choral tone expressed the meaning of the words.

In the “Magnificat,” the Virgin Mary’s song of joy upon being told by the Archangel Gabriel that she will give birth to Israel’s long-awaited Messiah, the tone of the singing was brightly ecstatic. In the “Nunc Dimittis,” St. Simeon’s prayer of thanksgiving upon seeing the infant Messiah, the quality of the choral color was autumnal, as befits a faithful servant at the culmination of his earthly life. In Bairstow’s offertory anthem, in which the text speaks of the mystery of Christ’s Incarnation, the composer harks back to the haunting melodies of medieval Gregorian plainsong before opening up into the texture to full harmony. Here Kotylo and his choristers projected both fear and trembling on one side and warm-hued reassurance on the other.

Even in Hancock’s simple Introit and Davies’ hymn-like setting of the Psalm, Kotylo drew singing of great sensitivity and expressivity. And at the organ solos at the start and finish of the service – the “Pastorale” and “Finale” from Alexandre Guilmant’s Sonata No. 1 in D minor – he revealed not just his own technical prowess and interpretive mastery but the splendor of St. Paul’s organ, as well.

Although the Choral Evensong scheduled for Sunday, Oct. 6, at 5 p.m. at the Episcopal Church of St. Martin-in-the-Fields, Chestnut Hill, is worthy of both attention and attendance in and of itself, especially since it’s the first of the season, there’s an added attraction this time around.

Erik Meyer, who has served at the parish’s music director for the past decade, announced his intention to retire from the post as of Sunday, Jan. 5. Meyer explained that he hopes to spend more time with his family and pursuing his career as a composer.

Meyer will be joined by his wife, flutist Anna Meyer, in a free recital of new music Friday, Oct. 4, at 7 p.m. in Christ Church, 20 N. American St. near 2nd & Market Sts. in the Old City section of Philadelphia.

The Philadelphia Orchestra welcomed composer John Adams to its podium to conduct three concerts in the Kimmel Center’s Verizon Hall Sept. 26, 27 & 28. The program consisted of Maurice Ravel’s orchestration of his piano piece, “Alborado del gracioso” (from “Mirroirs”), Igor Stravinsky’s “Song of the Nightingale,” and his own, “Scheherazade No. 2, Dramatic Symphony for Violin & Orchestra.” I caught the Saturday evening performance and came away more than a little saddened by the entire affair.

While I can’t deny that, as a pianist, I prefer the original version of “Alborado,” Ravel’s own orchestration is masterful. But it takes only a few minutes to perform and then it’s gone. Sad to say, Adams brought not one iota of orchestral discernment to Saturday’s rendition.

If you’re wondering why you may be unfamiliar with Stravinsky’s “Song of the Nightingale,” well, permit me to offer an explanation. It’s not noteworthy in any of its 20 minutes. Composed between 1908 and 1914 while the composer was busy producing “The Rite of Spring,” “Nightingale” is both attractive and forgettable. Once again, Adams brought nothing of note his reading.

And what about his own “Scheherazade”? There’s not much of note there, either, despite its 50-plus minutes of length. Based on the composer’s own take on the myth of “1001 Arabian Nights” – mostly fictitious junk from what I gathered during his spoken program notes – the finest moments in the score are those composed for the orchestra rather than for the solo violin.

Adams elicited exquisite tonal combinations from every section of the symphonic ensemble. Then he molded them into a coherent and accessible harmonic idiom. The sounds carry you away into an exotic world of compelling narrative and mesmerizing drama.

But the solo violin line is mostly a mismatched frenzy of storm-tossed cadenzas with only a few phrases of lyricism. Matters weren’t helped Saturday evening by Leila Josefowicz’s over-heated interpretation, replete with errant posturing that I suppose was intended to convey the emotions the music, itself, wasn’t projecting.

Having only recently seen a production of Adams’ opera, “Doctor Atomic,” and loving it, I was expecting so much more from this concert when I looked at it on paper. Perhaps that’s why I was so sorely disappointed by its performance in “real time.”

Local music lovers are primed to welcome Piffaro, the Renaissance Band, to Chestnut Hill Saturday, Oct. 5, at 7:30 p.m. in the Presbyterian Church of Chestnut Hill. The band’s program is entitled “Burgundian Beginnings, and Beyond: A Franco-Flemish Feast.” Guest artists include Adam Bergman on sackbut, Sian Ricketts on reeds & recorders, and Kiri Tollaksen on cornetto.

At the time of the French Renaissance, the Duchy of Burgundy – where all that wonderful wine is grown! – was nearly an independent state within the Kingdom of France and its dukes even more powerful than France’s kings. Flanders at the time of Renaissance was comprised of several counties and provinces within France and the Netherlands. Both Flanders and Burgundy played seminal parts in the development of the musical style of the period following the end of the Middle Ages.