Steven Erisoty by Jeremy Jones We lost a golden thread in the tapestry of our community with the death of Rose Malley on Feb.6. An award-winning potter and gardener, “Rosie” embraced art in all … 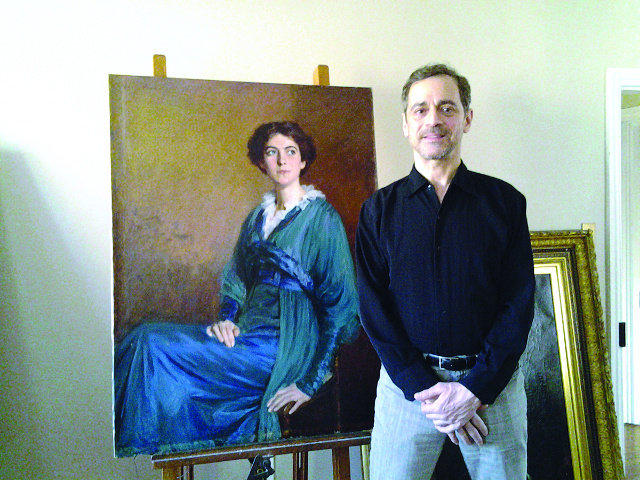 We lost a golden thread in the tapestry of our community with the death of Rose Malley on Feb.6. An award-winning potter and gardener, “Rosie” embraced art in all its forms. She was a consummately dedicated volunteer at Woodmere Art Museum. In memoriam, here’s to Rosie – a true original.

Imagine – you have inherited the portrait of your great aunt, a porcelain-skinned, dark-Irish beauty who was known to go to extreme and zany measures to conceal the faint spray of freckles over the bridge of her nose. Stories of Aunt Cathlyn and her freckles provided entertaining family lore for generations.

You take the cherished heirloom to an art restoration professional to be cleaned up a bit. When it is returned to you, Aunt Cathlyn no longer has freckles – or even worse – her freckles are darker and more prominent. The real Aunt Cathlyn is gone, and her story has gone with her.

The restorer explains that in cleaning the portrait he took the liberty of “bringing out” the freckles, and that adding a coat of varnish is something he “always does.”

These misguided attempts at art restoration are not uncommon, and why art conservator Steven Erisoty is as passionate about educating the public as he is about doing his work.

“There are no ‘always,’” said Erisoty from his sunlit studio in Chestnut Hill. “You don’t always clean, you don’t always varnish. It’s a lot more subtle than that. You have to understand what you are doing. There is no cookbook approach to restoring a piece of art. Treatments are geared to the object.

“The goal of an art conservator is to interfere as little as possible, in order to preserve and reveal as much of the artist’s message as possible. It is the ethic of least intervention. ‘Restoring’ has the connotation of repainting something and not necessarily respecting the artist. We don’t want people to think we are repainting or changing an artist’s work. Restoration is a component of conservation.”

On any given day, Erisoty is a detective, a historian, a chemist and a research analyst. He is an artist, a preservationist, a photographer and a reconstructive surgeon. He is a one-man rescue team for museums, private collectors and individuals who are committed to preserving and retaining the original integrity of an art work.

“We trust and rely on Steven’s judgment,” said Klare Scarborough, director and chief curator at La Salle University Art Museum. “He is a wonderful conservator, and we are very lucky to have him in our neighborhood.”

You will find images of Erisoty’s conservation work at LaSalle, including before, during and after photos, in the “Paintings” section, at http://artmuseum.lasalle.edu/exhibits/show/conservation-treatments

While in high school, Erisoty’s inherent interests in art and antiques began to take form as a life-calling. His independent-study teacher arranged for him to spend a day at the Wadsworth Atheneum Museum of Art. The curator at the museum suggested Erisoty look into the art conservation program at the University of Delaware, which ultimately afforded him the opportunity to study art conservation at Winterthur, while earning a bachelor’s degree in art history and chemistry.

In 1982, while working toward an MFA in paintings conservation, with a certificate of advanced study from the Cooperstown graduate programs, State University of New York, Oneonta, Erisoty interned at the Philadelphia Museum of Art. The following year he served as assistant conservator, charged with researching and discerning the placement of the original colors in the Robert Adam “Lansdowne Room.” He scraped and then studied hundreds of samples of paint under a microscope to determine where colors from the late 17th century were originally situated.

In 1985, two curators at the Philadelphia Museum of Art introduced Erisoty to a private collector of 17th century Italian paintings who was in search of a conservator. He has been in private practice ever since.

“Steven gets under the skin of an artist,” said Woodmere Art Museum director William Valerio. “He uses his technical and scientific skills and knowledge, and makes the artist’s intention come back into clarity.”

On Saturday, March 7, at 3 p.m., Erisoty will be giving a lecture at Woodmere, where he has treated many paintings over the years, including several paintings appearing in Woodmere’s newest exhibition, which opened Feb. 14. Admission for the lecture, “Maintaining and Clarifying the Artist’s Vision: The Art of Conservation,” is $15 ($10 for members).

“I want to raise the standard of awareness,” said Erisoty, “so people get the best possible work done to preserve things that are culturally important, to be passed on to generations.”

A member of the Art Conservators Alliance and the American Institute for the Conservation of Historic and Artistic Works, Erisoty conserves works in oil on wood, canvas and metal, and sometimes acrylic painting and egg tempura. He does not take works of art on paper. Consultations and estimates are given by appointment only. Call 215-753-8808.