Shop Local: A place to grieve for deceased pets

Shop Local: A place to grieve for deceased pets 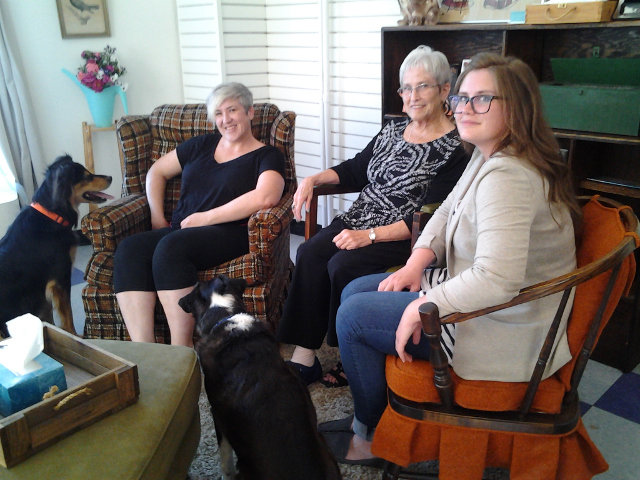 Devastated. That’s the only word my friend Pam, a successful Philadelphia attorney, could summon up after the loss of her cat “Sweetie.” During any attempt Pam made to talk about it, her emotions silenced her.

Sweetie had been a member of the family for 16 years and after a six-month struggle with severe irritable bowel syndrome, Sweetie died at home on Aug.1.

“She brought us so much joy,” Pam reflected as the grief period plays on. “That’s part of the problem of losing a cat. Because of the tremendous joy, you feel tremendous pain and there is an immense void because your pet is with you as much or more than any single member of the family.”

Posted on Pam’s refrigerator is a telephone number given to her by her veterinarian after Sweetie passed. She is hesitant and a little embarrassed at the thought of discussing such personal grief in a group setting, but it is my hope Pam and other pet owners who are struggling with the the loss of their pet or feeling overwhelmed by their pet’s illness will be encouraged to call and connect with a valuable new resource based in Mt. Airy.

For nearly a decade, Queenie’s Pets, now located at 7174 Germantown Ave., has provided community-centered professional dog walking and pet sitting services, to which they have recently added comprehensive holistic services. For more in-depth information on Queenie’s Pets and owner Adina Silberstein, see Len Lear’s story in the March 20, 2015, issue of the Local.

In April, 2014, when Silberstein had to put down her 10-year-old cat Moxie who was suffering from lymphoma, she took her to the Center for Animal Referral and Emergency Services (CARES), in Langhorne.

“It was what can only be described as a positive experience,” Silberstein said. “They have a comfort room with couches and lots of tissues, and they let you be in that space with your pet as long as you want to, so that you can prepare yourself. The whole thing was so peaceful.

“When I was there I saw a CARES brochure for a pet loss support group and thought I would love to do something like that in Mt. Airy.”

A year prior to Moxie’s death, West Laurel Hill Cemetery president Pete Hoskins, a longtime client of Queenie’s Pets who is very involved in the lives of his own pets, asked Silberstein, a graduate of the Goldman Sachs 10,000 Small Businesses program, to advise and consult in the planning of Laurel Hill’s pet cemetery which is due to open this coming fall.

During discussions with Hoskins after Moxie’s death, Silberstein told him she wanted to start a pet loss and grief support group at her Queenie’s Pets location.

“With the timing of Laurel Hill opening their pet cemetery, it was a perfect opportunity,” Silberstein said. “Other than CARES, the only other pet-loss support group offered in Philadelphia is at the University of Pennsylvania Veterinary School.”

West Laurel Hill Cemetery is now the official sponsor of Queenie’s Pets nonprofit pet loss and grief support program, which makes it possible for them to provide professional facilitators for the group, create marketing and education materials and to proceed on a larger scale than they would have without the partnership.

“Now I have the opportunity to do something philanthropic – to give back to the community,” Silberstein said.

The support group meets on the third Thursday of the month, from 6:45 to 8:00 p.m. It is open to participants 14 years of age and older. There is no charge. Advance sign-up is suggested but not necessary.

Leading the group are facilitators Marilyn Silberstein, MSW, Adina’s mom and a dedicated pet lover, and Amy Defibaugh, an instructor specializing in death and dying studies at Temple University. Her work “Toward the Weeping Willow: An Examination of the Death and Dying of Companion Animals” was recently featured in the New York Times.

“We work together to professionally lead the group but also to let the group go where it needs to go,” Silberstein said. “Sometimes the discussion goes to people wanting to know whether or not it’s time to put their pet down. That’s been a very common theme since our first group in March.”

For folks like my friend Pam, who may feel awkward or self-conscious, Silberstein said, “We do face the situation where people are embarrassed to come to the group. We’re here to start to remove the stigma and to show that these are our family members.”

“We offer a safe and comfortable space to grieve, heal and learn,” Adina Silberstein said. “People deserve that support."