Lori Coyle and Steve Gotzler, who met on a train, write each other Valentine’s Day love notes at the WPM (words per minute) Typewriter Shop in West Mt. Airy. (Photo by Lorraine … 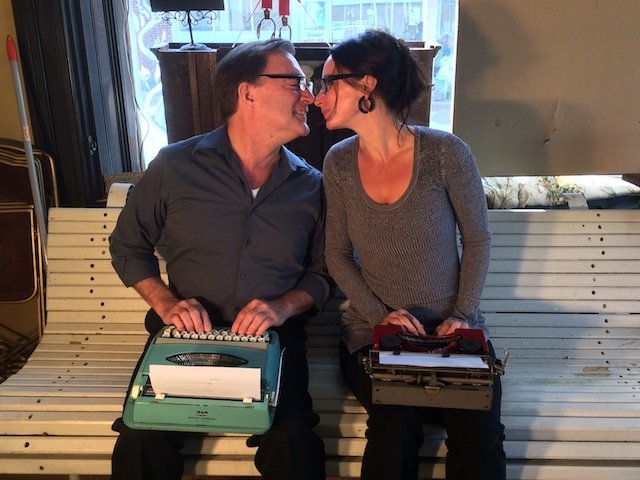 Lori Coyle and Steve Gotzler, who met on a train, write each other Valentine’s Day love notes at the WPM (words per minute) Typewriter Shop in West Mt. Airy. (Photo by Lorraine D’Angelo)[/caption]

By the time Lori Coyle asked the stranger at the 30th Street Train Station how to find the BoltBuses, she was one of the region’s pre-eminent tango teachers. (The BoltBus is an intercity bus common carrier that operates low cost, non-stop and limited-stop routes in the northeast and western U.S. and parts of Canada. In the northeast, BoltBus provides service from New York City and Newark to other cities along the I-95 corridor, including Philly.)

He was headed to a National Lawyers Guild meeting, being a Lefty civil rights lawyer. She was going to the Big Apple to dance tango. Lori asked to sit next to Steve.

The journey flew by. “It seemed like there was no traffic that day,” Lori recalled this week, sitting with Steve in the sunny WPM (words per minute) Typewriter Shop in West Mt. Airy, where they had just brought three machines for cleaning and repair.

By the time they stepped off the BoltBus 90 minutes later, they both sensed that they were falling in love. “I knew I never wanted to be far from him,” said Lori. Steve stayed in New York for several weeks’ work. They wrote each other constantly. It seemed like hundreds of emails. In retrospect, each one was a love note.

Lori is also a former English teacher. Her mentor, O. Richard Forsythe of Shippensburg University, fostered her love of the language and inspired her teaching career. She loves stringing words together and sharing the sheer joy of writing.

Steve’s history is more complicated. Let’s say for now that when, as a child, he changed the margins on his mother’s typewriter, it wasn’t the last time he got in trouble. Years later, he shared an office with his mentor, Arthur Kinoy, while studying law at Rutgers University. Steve still fights for the underdog and is now the Executive Director of Prisoner Visitation and Support.

Looking out the window of the WPM Typewriter Shop, he laughed, explaining that all of his professional friends from the ‘70s now live in Mt Airy.

You may surmise, Dear Reader, that the story has a happy ending. Lori and Steve live now in Media. Most Friday nights, they each sit at a typewriter, pour some Malbec and start writing notes. After a while, they switch seats and continue the other’s story, message or poem. And they switch back again. And maybe again and again. There are still love notes to be written. “I save all of our notes,” says Steve. “Typing is the most useful skill I learned in high school.”

The folks at WPM Typewriter shop promised that Lori and Steve will have their machines back in time for Valentine’s Day.