Labcorp Technician Kathy Moody and Chestnut Hill resident Laura Flandreau are all smiles after receiving their free hugs. by Barbara Sherf My husband and I traveled to our ‘happy place’ in … 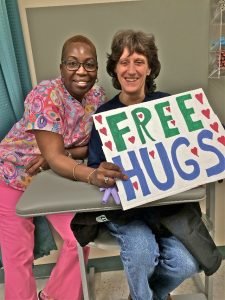 My husband and I traveled to our ‘happy place’ in mid-October, a week before my father passed away and three weeks before the presidential election. Instead of telling people I was going on vacation, I used the term “retreat” as I wanted to tune out the nasty news cycles, get back to nature and pre-mourn my father’s pending death.

Walking along the beach of Assateague Island in Maryland, where the wild horses roam, I started looking for seashells; however due to the ravages of Hurricane Michael, what I found were simply shards of shells.

Now that my father has passed away and as my way of dealing with the election results, I now take these remaining shell shards around with me wearing my “Make American Kind Again” button that Mt. Airy Dumpster Diver artist Ellen Benson made, and I hold a handmade “FREE HUGS” sign, doubling down on kindness.

Last Friday I gave and received 12 hugs in 15 minutes at the LabCorp facility in Wyndmoor. Chestnut Hill resident Laura Flandreau and technician Kathy Moody were the first two to receive the free hugs.

“We don’t get enough hugs. It was wonderful, warm and a great way to start the day,” said Moody as a fellow technician liked the idea but had “a thing with personal space.”  I respected that.

“It was a wonderful brightening up of my day,” echoed Flandreau as I hugged her and each person in the waiting room. Nobody declined.

From there I went to Camden in an attempt to probate my father’s will. Turns out I was in the wrong county, but along the way I met a bus full of blind people who asked for and received more than one hug.

Walking up to the burly security guards at the courthouse, one looked at the sign and acquiesced. “Sure, we can all use hugs,” said Bob Fenton as his co-workers lined up behind him for more hugs.

Smokers outside of the building received hugs; a hot dog vendor received a hug; construction workers received hugs; a woman in a wheelchair, members of the Hispanic, African American and Caucasian populations gave and received hugs. Children with mucus running down their little noses got and received hugs. A man coming out of Wawa who initially declined because he was sick broke down and agreed to a hug. Even the gas station attendant, with the heavy smell of petroleum on him, took two hugs and vowed to make a sign of his own.

Of all four dozen prospective huggers, there was just one man who outwardly declined.

“I’d rather have a gun,” he said as he hopped into his pickup truck and sped off.

As I gave and received the hugs, I whispered “Make American Kind Again.”

“Amen” was the word most responded with.

When I finally got to the right building and department for surrogate court, the security guard, the receptionist and my contact for the will, Ameenah Rasheed, wearing a Muslim head covering, gave and received hugs.

As Rasheed proceeded to look at the paperwork, a look of concern came over her face. She explained that since I had my father’s mailing address changed to mine several years ago, the will needed to be processed in Norristown, Montgomery County, a mere 20 minutes from our Flourtown home, even though he was living in South Jersey at the time of his death.

“I’m so sorry you had to come all of this way,” she apologized.

“I’m not,” I responded. “The people in Camden welcomed me with open arms, and in no way was this a wasted trip.”

On Saturday I proceeded to do the “free hugs” thing at the Chestnut Hill Library and to the five attendees of the Patchwork Storytelling Guild.

“My reaction was mixed,” said Ray Tackett of Germantown. “I thought it was a sweet idea, but some could consider you a weirdo. I liked that it was relatively spontaneous, and I didn’t have to think too much about the decision as you walked toward me with the sign and open arms.”

Later in the afternoon I made my way to Germantown to sit with a dozen area residents at a post-election support group for individuals having difficulty dealing with the election results. Claudia Apfelbaum of ClaudiaListens.me, a Germantown-based psychotherapist specializing in healing from personal and interpersonal trauma, led a workshop called “A Time of Mourning.”

She said that many people are experiencing fear and despair since the election. Apfelbaum suggests that doing progressive things together with others is a major way of combatting the fear and feelings of isolation. "I am encouraging people to put their energy out there in a positive way, whether it's taking up a cause, being creative or simply being kind to another.”