Bloodsworth is seen here speaking at the Witness to Innocence 2019 Annual Gathering in Puerto Rico, where he and WTI were honored for their efforts fighting for death penalty abolition. (Photo by … 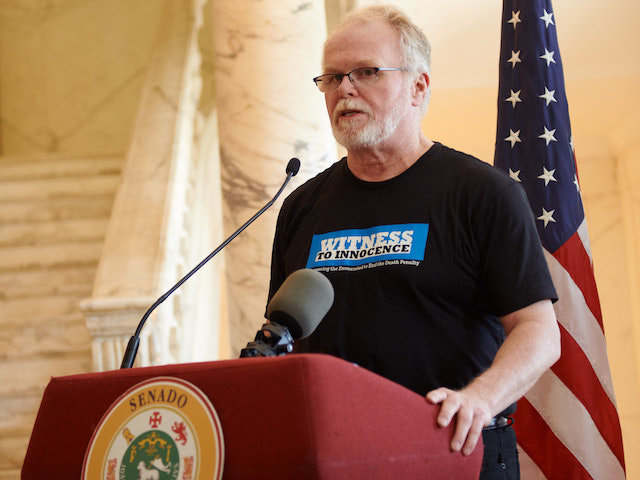 Bloodsworth is seen here speaking at the Witness to Innocence 2019 Annual Gathering in Puerto Rico, where he and WTI were honored for their efforts fighting for death penalty abolition. (Photo by Martin Schoeller)

At 23, Kirk Bloodsworth was recently married and honorably discharged from the Marine Corps., when he found himself in a waking nightmare that has colored the rest of his life.

On a June day in 1984, 9-year-old Dawn Hamilton was found brutally raped and murdered in the woods on the outskirts of Rosedale, Maryland, where Bloodsworth had moved several months before. Police issued a sketch of a man described by two young boys who had seen the girl earlier in the day and later had seen a man in the same area. On the strength of an anonymous call (that came from one of Bloodsworth’s neighbors) citing his resemblance to the man in the sketch, Bloodsworth was arrested.

The boys described a 6-foot, 5-inch tall, skinny and tanned white man with curly blond hair and a bushy mustache. Bloodsworth was about half a foot shorter, had red hair and weighed more than 200 pounds. And the boys never identified him in a line up.

“Eighty-five percent of all wrongful convictions come from witnesses giving the wrong descriptions,” he said.

He was convicted in 1985 of Dawn’s rape and murder and sentenced to die. A year later, at a second trial, his sentence was commuted to two life sentences. By this time, he had served two years on death row in the Maryland Penitentiary in Baltimore. Nearly everyone thought he was guilty.

“Two juries, the Baltimore County Police Department, two judges, everyone in the prosecutor’s office – all thought they had caught the right person,” he said. Crowds had cheered when the conviction and sentence were passed down, but Bloodsworth never wavered; he maintained his innocence from the very beginning.

While incarcerated, Bloodsworth worked in the prison library, where he discovered the 1989 book by Joseph Wambaugh, “The Blooding,” about the conviction of a man in England for the rape and murder of two teens. When he read that DNA testing had proved the killer’s guilt, Bloodsworth was inspired to speak with his attorney, Robert Morin, about getting the biological evidence against him tested. This new technique had been discovered in 1985, the same year he was convicted.

“I felt that if DNA testing could be used to convict a guilty person, it also could be used to clear an innocent person,” said Bloodsworth, who likened the whole experience to getting a diagnosis of a terminal illness. “It happens all the time … someone is innocent, but others accuse them and they go to prison. It’s a horrible feeling to be sentenced to die for something you didn’t do.”

So Bloodsworth and Morin began the process of getting the testing done. At the time, there were only two labs in the country that did this relatively new procedure – polymerase chain reaction analysis, in which a small amount of DNA is copied until there is enough to analyze. Almost another year passed before the test was completed by the California lab. The results, delivered in April 1994, exonerated him: nothing about the DNA at the crime scene matched his. Within two months, the FBI’s lab had corroborated that result, and two days later, on June 28, 1994, Bloodsworth was released from the Jessup Correctional Institution in Jessup, Maryland.

“I spent eight years, 10 months and 19 days in prison for a crime I did not commit,” Bloodsworth said.

He finds it hard to put words to the stigma that still surrounded him, even after science cleared him beyond the shadow of a doubt.

“It’s almost like, ‘Well, he must have done something … there must have been a reason.’ But there was nothing. It was all circumstantial, like pushing an innocent man through the eye of the needle of reasonable doubt,” he said.

“Dawn Hamilton was a constant in my life,” he explained. “She had no voice and I wanted to find the real killer and get justice for her.”

Through a fortuitous series of events, the perpetrator was found in 2004. Kimberly Shay Ruffner was serving a 45-year sentence for burglary, attempted rape and assault and had been “hiding” in plain sight – living one floor below the cell Bloodsworth had occupied for all those years. Ruffner, who had been released from jail shortly before young Dawn was killed (and then arrested on the crime for which he was imprisoned), was charged, confessed and was sentenced to life on top of his existing sentence.

The two men had lifted weights at the same time, and Bloodsworth had delivered library books to Ruffner, yet Ruffner never spoke up to free his fellow inmate.

“In hindsight, [I realize that] he never looked me in the eye, and he wouldn’t engage in conversation,” said Bloodsworth, who has since forgiven Ruffner for allowing him to serve time for something Ruffner knew he did not do. “But I can’t forgive him for Dawn. That has to come from somewhere else.” 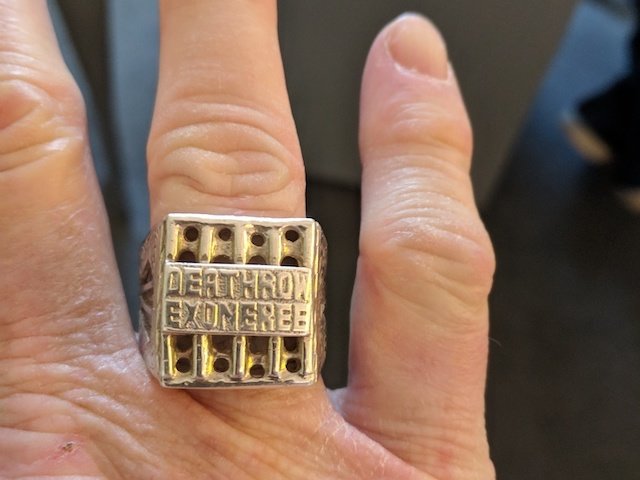 Rings made by Bloodsworth depict an empty cell and read “death row exoneree.” He has crafted and gifted the sterling silver rings to 230 men and women so far. He calls it the “exonering.”[/caption]

The prosecutor on both of Bloodsworth’s trials, Ann Brobst (who had publicly called him a “monster” in both instances), met with Bloodsworth to personally share the news of Ruffner’s conviction. He burst into tears.

“I was so happy that Dawn finally got justice,” he said. “This whole business – the criminal justice system – is adversarial. But it can’t be that way toward the truth. It has to be all about justice, not convictions.”

“After 19 years, they found that none of that (the charges against him) was true. Whenever I write official letters, I sign them, Kirk Noble Bloodsworth, A.I.M, An Innocent Man,” he said.

And yet, Bloodsworth is not bitter.

“In spite of everything, I still believe people are really good at heart,” he said, quoting from Anne Frank’s diary.

Always spiritual, Bloodsworth, a former Baptist, converted to Catholicism in prison. Bloodsworth had returned to work as a waterman, crabbing in the Maryland waterways, as his father and grandfather before him, and he gradually became more involved in the fight to abolish the death penalty and the use of DNA testing to prove innocence.

As the first person in this country to use DNA testing to prove his innocence in a capital conviction case, Bloodsworth became a popular speaker.

“The more I got involved with the criminal justice system and fought to abolish the death penalty, the more I knew it was my path,” he said.

Bloodsworth has worked with the Justice Project in Washington, D.C., and is a member of the Board of Directors of the Innocence Network – the first death row exoneree to join the board. In 2004, a program he advocated for was established through the Justice for All Act. The Kirk Bloodsworth Post-conviction DNA Testing Grant Program provides funding to states to help defray the costs association with DNA testing done after convictions. He has been active with Witness to Innocence since its inception in 2005, as the Director of Communications, Deputy Director and Interim Executive Director.

Today, Bloodsworth is 58, lives in Ambler and works tirelessly as the Executive Director of WTI, a nonprofit based in Philadelphia whose whole mission is to abolish the death penalty while highlighting the voices of exonerees and advocating for their well-being. The nonprofit, led by exonerees and their families and located at 15th and Cherry streets in Philadelphia, was founded by Sister Helen Prejean, author of “Dead Man Walking,” and Ray Krone, a death row exoneree from Arizona.

“The criminal justice system, like all human institutions, is too prone to error. Mistakes – rampant mistakes – are made,” he said.

He added that the system is often racially biased and arbitrary and doesn’t have adequate judicial review.

He encouraged everyone to think long and hard about the use of the death penalty in this country (especially in light of its recent reinstatement in federal cases by U.S. Attorney General William Barr), and he quotes Freddie Lee Pitts, WTI’s first board chair, “You can free a man from prison, but you can’t free him from the grave.”

“I would ask everyone to support WTI and abolition [of the death penalty]. If you see an exoneree, welcome them home. Look at yourself. If it can happen to me, it can happen to anyone in America.”

One night during his incarceration, Bloodsworth dreamed that Pete Rozelle, former National Football League Commissioner, gave him a silver ring. After he gained his freedom, Bloodsworth began silvercrafting and made rings that looked a lot like that dream ring. He wanted to do something nice for exonerees as they rejoined their lives outside of prison, so he has crafted and gifted the sterling silver rings for 230 men and women, to date. He calls it the “exonering.”

Bloodsworth is the subject of the book “Bloodsworth: The True Story of the First Death Row Inmate Exonerated by DNA,” written by Tim Junkin, and selected for the 2018 “One Maryland, One Book.” His story is also told in the documentary film, “Bloodsworth: An Innocent Man,” directed by Gregory Bayne.