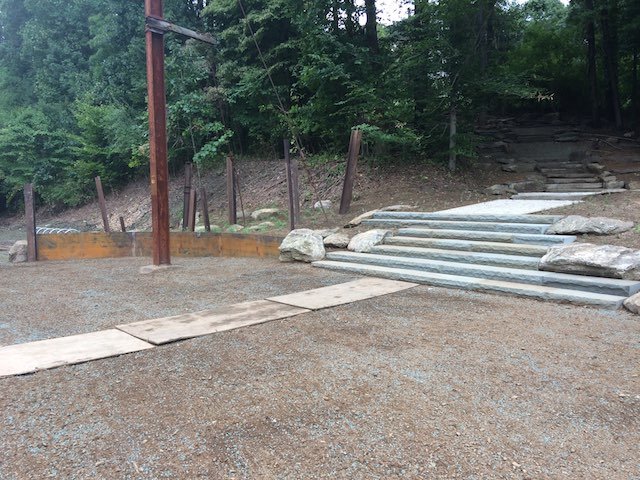 The new 'gateway' to the River Trail at Schuylkill Center for Environmental Education.

The Schulkill Center for environmental Education will mark the opening of a new gateway to the Schuylkill River Trail on Thursday, Sept. 27 from 11 a.m. to noon.

The center began the project in June and have finished what is a connection of its own trail network to the River Trail which runs contains about 60 miles of trail between Center City and Pottsville. Plans are in the works to complete the trail, after which it will be nearly 130 miles long.

Support for this project was provided by The William Penn Foundation.

“The River Trail Connector will ensure that every River Trail user knows the Center is a short uphill walk,” said Mike Weilbacher, Executive Director of the Schuylkill Center for Environmental Education, “and the connector will invite them to visit us. It will also provide a view to one of the few Philadelphia streams that still flows into the Schuylkill River, which until now has been hidden behind a large fence. We’re revealing and telling the story of a beautiful stream and forested glen to the River Trail users.”

According to a release from the center, the River Trail connector will include the following features:

• A bike rack, supported with a grant provided by REI, so that visitors can lock their bikes at the River Trail and explore the Center’s trails

• A welcoming kiosk with a large trail map and paper trail maps for visitors to use, as well as information about the Center’s educational programming

• An overlook of Smith Run, first-order stream that originates on the Schuylkill Center’s property, passes through a forested glen, and flows underneath the River Trail directly into the Schuylkill River, along with interpretive signage that puts these water resources in context

• A gathering space for the public, allowing the Schuylkill Center and the Circuit Trails network to hold public events onsite, using the connector as a meeting and programming space

“The Schuylkill Center is a wellknown presence in the region, and a pioneer in environmental education. Its location adjacent to, but high above, the heavily used Schuylkill River Trail presented an enormous— if challenging—opportunity to reach hundreds of thousands of people who use the trail every year for recreation and commuting,” said Andrew Johnson, director of the William Penn Foundation Watershed Protection Program. “By creatively establishing a direct physical link to the trail, the Center will be able to connect with thousands of people on the trail to increase their awareness of the Schuylkill River and its important role in the Delaware River watershed.”

To attend the ribbon cutting: Park along Shawmont Avenue where it meets Nixon Street and walk northwest up the River Trail (with the river on your left) for a half mile until you reach the gateway.

For more information on the event, see schuylkillcenter.org/blog/event/ribbon-cutting-for-the-river-trail-gateway/

For more information on the Schuylkill River Trail, see schuylkillrivertrail.com